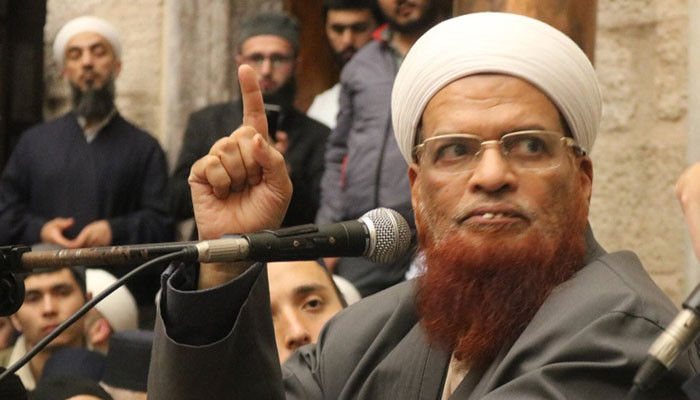 KARACHI: Noted Islamic scholar Mufti Taqi Usmani on Saturday condemned the incident in Sialkot in which a mob lynched a Sri Lankan factory manager, saying that it has â€œdisgracedâ€ Pakistan and the Muslim Ummah.

A day earlier, Diyawadanage Don Nandasri Priyantha, who had been working as a manager at a private factory on Wazirabad Road in Sialkot, was tortured to death and his body set on fire by a mob over allegations of blasphemy.

In a message on social media, the former judge of the Federal Shariat Court said that blasphemy is an extremely heinous crime but it requires equally strong evidence to prove it.

â€œTaking it upon oneself to lay accusation and mete out punishment in a barbaric and haram way has no justification at all,â€ Mufti Taqi said.

The incident has shocked the nation with top government functionaries and senior politicians condemning the incident.

In a statement on Twitter, PM Imran Khan promised to bring all those involved in the incident to the book.

Briefing the media on the progress made in the case so far, Special Assistant to Chief Minister on Information Hasaan Khawar said at least 118 people have been arrested for the cold-blooded murder.

Police have identified 13 “key suspects” allegedly involved in the attack with the help of other managers of the factory where the incident took place. The suspects have been shifted to an undisclosed place for further investigation.

Khawar said the suspects were arrested with the help of 160 videos that yielded 12 hours of footage.

He said the provincial government has formed 10 teams to arrest all suspects involved in the murder.

The Sri Lankan manager had already died when police received the first telephone call regarding the incident, he said.

The spokesperson said police and the civil administration will take the investigation to its logical end.

He revealed that the Sri Lankan national had been living alone in the country.

Speaking on the occasion, IG Punjab said police negligence was not a factor in the brutal murder.

He said the district police officer (DPO) and a superintendent of police (SP) had to reach the crime scene on foot as roads were blocked in the area on that day.