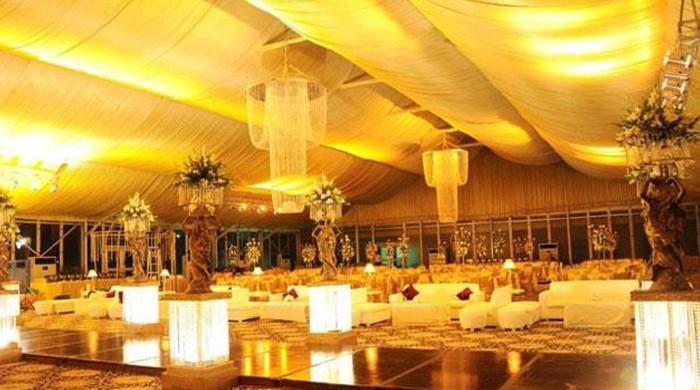 KARACHI: Marriage halls will reopen from September 15 in Khyber Pakhtunkhwa, Sindh and Punjab, as coronavirus infections decline across the country and normal business activities resume.

The Sindh government’s home department on MondayÂ  â€” upon directives of the National Command and Operation Centre (NCOC) â€” issued a notification to announce that the ban on marriage halls had been lifted.

The notification said that wedding events at marriage halls can take place from September 15. However, COVID-19 precautionary measures such as wearing face masks and social distancing will have to be observed to ensure the virus does not spread.

The provincial government also issued timings for business activities â€” from 6am-8pm â€” while shops will be allowed to remain open till 9pm on Saturday nights.

Medical stores and shops selling items of necessary use will not be subject to the above timings.

The above measures are applicable throughout the province till October 15.

The Punjab government also issued a notification in which it called on marriage halls to follow SOPs strictly to ensure the infection does not spread during wedding functions.

In a notification, the Punjab government announced that educational institutions and marriage halls will be reopened across the province from September 15.

Wedding halls will be allowed to host only 50% of their capacity, according to the secretary, so that social distancing can be observed.

Usman called on masses to use face masks, hand sanitizers and gloves for their protection.Â  Â

Management of wedding halls have been cautioned from causing a rush at the entry and exit points of the marriage halls and temperatures of those attending the events will be checked via thermal guns. Sanitizers will be provided to guests at entry levels of the halls.

People will be seated inside the halls at a safe distance from each other and the staff will be reduced by 50%. Different marriage events can be held at the same hall after a minimum two-hour interval during which the marriage hall will be sanitized.

The KP government has issued directives that no wedding event post 10pm will be allowed to take place inside the halls.