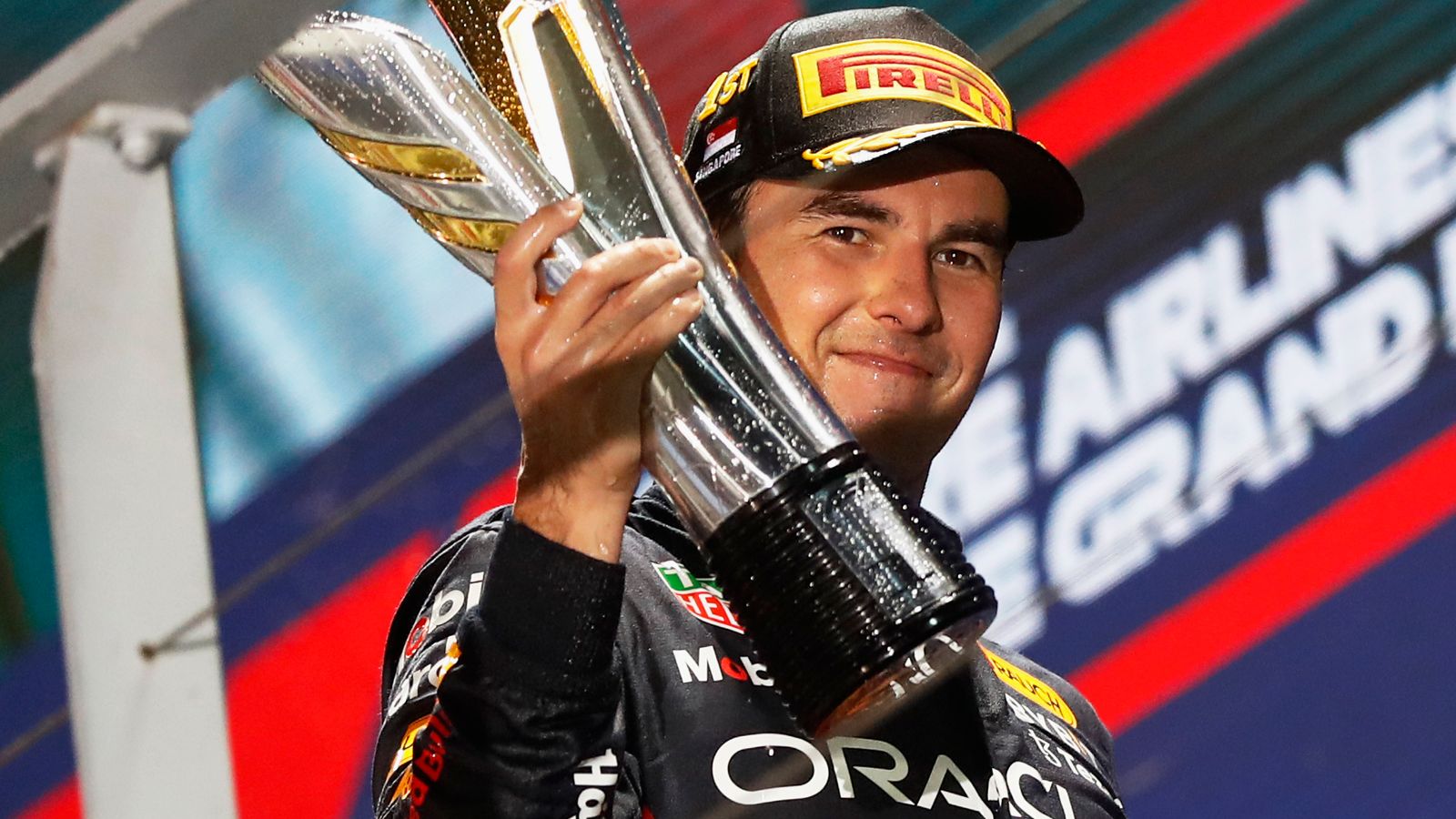 Sergio Perez won the fourth Grand Prix of his career in Singapore, surviving a post-race stewards’ investigation; F1 returns next weekend with the Japanese Grand Prix and all sessions are live on Sky Sports F1 including the race at 6am on Sunday October 9

Sergio Perez celebrated “the best drive of his career” as he dominated a gruelling Singapore Grand Prix on Sunday.

Perez is one of only two men who can still mathematically deny Max Verstappen this season’s drivers’ championship and overtook the other – Ferrari’s Charles Leclerc – on the opening lap before controlling the rest of the race to secure his fourth career victory.

The first Singapore Grand Prix in three years, which was delayed by an hour due to heavy rain, featured multiple safety cars and was raced to the maximum two-hour limit before Perez had to survive a post-race investigation by the stewards for infringements behind the safety car.

And the Mexican believes the gruelling victory was his greatest day in Formula 1 and sent a clear message to his critics.

“It was certainly my best performance,” Perez said after the race. “I controlled the race.

“The last three laps were so intense – when I got out of the car, I felt it. I gave everything today.”

He added in his post-race news conference: “I’m super happy. This win is really special for me because I’ve had a bit of a rough patch in the last few races.

“The media in Formula 1 makes it a lot bigger. Maybe it’s because I am just Mexican? If I am not on the podium for two races in a row then I am having the worst season ever and Red Bull should drop me.

“That’s the sort of stuff you get to see and so it’s nice to get the win. It’s not a reminder to anyone of how good I am, but it’s always good to put in these sorts of performances.”

“That is, without a shadow of a doubt, the best drive of his career. In tricky conditions, he nailed the start, he converted the start… and was just always in control and super-cool,” Horner said.

“It’s a massive, massive result for him and I’m super-proud of him today.

“I think it even surpasses his Monaco victory and under massive pressure, he’s gone out and delivered.”

Verstappen: It’s not where we want to be

However, Verstappen was left to reflect on a difficult weekend that prolonged his wait for a second drivers’ championship crown for at least another week.

After qualifying eighth and dropping to 12th after a slow start, Verstappen had battled to fifth, only to go off the track trying to pass Lando Norris after a lap-40 safety-car restart.

He recovered to finish seventh – passing both Lewis Hamilton and Sebastian Vettel in the closing stages – but was dissatisfied with the outcome given the pace in his Red Bull.

“It’s not where we want to be,” he told Sky Sports.

“Yesterday, you put yourself in a spot like that and it can either work brilliantly and you can drive back to the front or it’s very frustrating like we had.

“Seventh is better than eighth but it’s not what I’m here for, not with a car like that and what we showed in practice.

F1 returns next weekend with the Japanese Grand Prix and all sessions are live on Sky Sports F1 including the race at 6am on Sunday October 9.