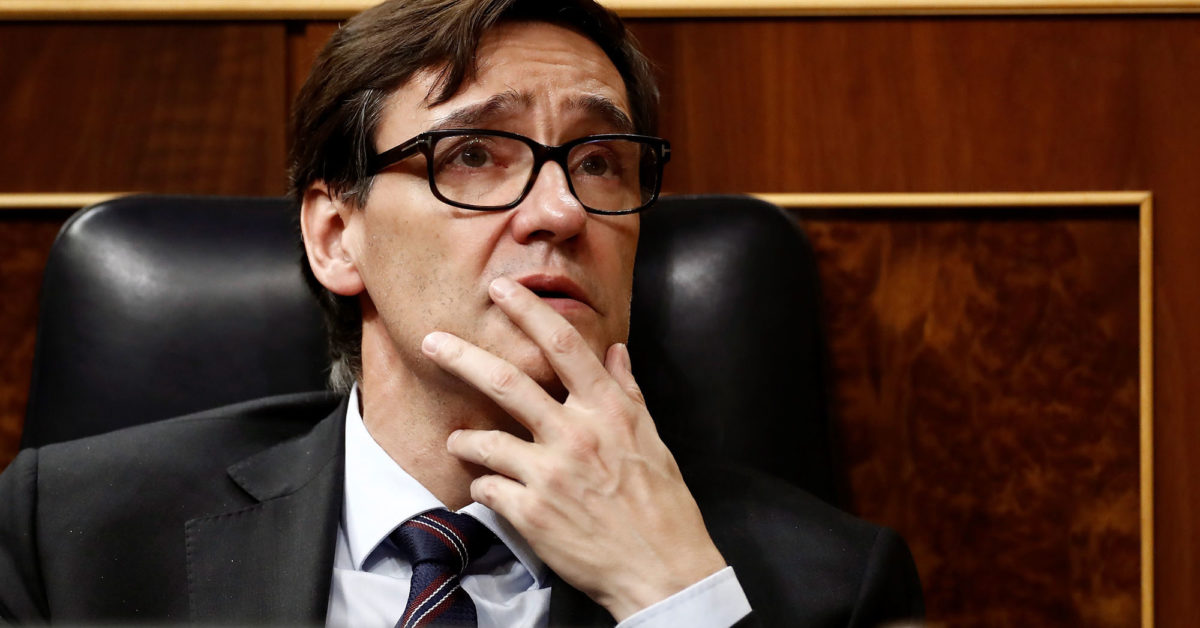 BARCELONA â€” Salvador Illa, Spainâ€™s health minister, is being thrust from one front line to another: from managing the coronavirus pandemic to the fractious politics of Catalonia.

Ahead of elections on February 14, the Catalan Socialist Party â€” the regional wing of Prime Minister Pedro SÃ¡nchezâ€™s Socialist Workersâ€™ Party (PSOE) â€” went out on a limb and named the mild-mannered 54-year-old health minister its lead candidate.

The move was largely seen as a major gamble, given the mixed reviews Illa has garnered for his handling of Spainâ€™s response to the coronavirus pandemic, which has claimed more than 60,000 lives and left the economy reeling.

It may also turn out to be a masterstroke. The Socialists are hoping that Illa â€” thanks to his name recognition and steady performance in the polls â€”Â can take the sting out of the notoriously polarized Catalan debate and offer up a moderate â€œthird way.â€

â€œHeâ€™s a combination of enormous common sense, hard work, sharp intelligence and a lot of goodness,â€ SÃ¡nchez told a PSOE meeting after unveiling him as candidate. â€œHeâ€™s the man Catalonia needs.â€

If the opposition has labeled Illaâ€™s nomination a cynical electoral stunt, few are disputing the fact that it seems to be paying off so far: The Catalan Socialist Party (PSC) is far ahead of other unionist parties in the polls â€” and even appears to have a chance of beating the main pro-independence forces.

A poll published on January 29 by the Catalan governmentâ€™s statistics institute (CEO) showed the PSC in third place, but close behind the Catalan Republican Left (ERC) and Together for Catalonia (JxCAT), which currently govern the region in coalition. Another survey, by the Spanish statistics institute (CIS), showed Illaâ€™s party nearly 4 points ahead of its nearest adversary.

Trailing them, on the right, Ciudadanos and the conservative Popular Party (PP) â€”Â  both of which staunchly oppose the regionâ€™s independence â€”Â are vying with the far-right Vox, which is expected to win seats in the Catalan parliament for the first time.

Although Catalonia has been a Socialist stronghold for much of the modern era, the Socialists have struggled to make themselves heard in recent years as the debate over Cataloniaâ€™s territorial status has become increasingly fractious.

The Socialistsâ€™ uneasy position translated into electoral losses: In the last election â€”in December 2017, just months after the region held a referendum on independence deemed illegal by Madrid â€”Â the party slipped to 17 seats and a distant fourth place in the 135-seat parliament.

Voter defections from the Socialists were a boon for the stridently pro-unity Ciudadanos, led by InÃ©s Arrimadas, which became the biggest single group in the chamber, but was unable to form a government. The three secessionist parties, meanwhile, maintained their majority with a combined 70 seats.

Under SÃ¡nchez, the Socialists have opted to take a more conciliatory approach than their fellow unionists to the right, including Ciudadanos, and advocate for strengthening the regionâ€™s self-government while still opposing independence outright.

Votersâ€™ exhaustion with the regionâ€™s polarized politics also seems to have played a role in the Socialistsâ€™ climb back up the polls.

Even before Illaâ€™s nomination, the Socialists â€œwere already going to make up lost ground because they were coming across as the more moderate option,â€ said Francesc-Marc Ãlvaro, an author and journalist at the newspaper La Vanguardia.

â€œPeople are fed up with the old fights between those who want independence and those who donâ€™t.â€

The health ministerâ€™s aversion to vitriol and finger-pointing â€”Â unusual in Spainâ€™s often toxic political arena â€” has also helped to distinguish him from other candidates.

As part of his campaign, Illa has pledged to â€œturn the page on the last 10 years that have divided societyâ€ and said he wants â€œto go back to co-existing and accepting that there is a majority that does not want independence.â€

â€œIn the politics of confrontation that weâ€™ve had in Catalonia, and also in the rest of the world, heâ€™s a rare type of, letâ€™s say, gentleman,â€ said Ferran Pedret, a member of the Catalan parliament for the PSC.

Still, observers caution that â€”Â affable as he may be â€”Â disapproval of Illaâ€™s management of Spainâ€™s coronavirus response could hamper his chances, as critics seek to portray him as the figurehead of a grossly mismanaged strategy. The political right has accused the Spanish government of incompetence, unilateralism and lack of transparency throughout the crisis.

More than 3 million people have been infected since the start of the pandemic. And if the third wave now appears to be stabilizing, the economy has taken a heavy hit, with Spanish GDP shrinking by more than 11 percent in 2020, according to national figures.

Illa may be â€œa pleasant guy,â€ but his handling of the pandemic has been â€œdisastrous,â€ said Nacho MartÃ­n Blanco, a member of the Catalan parliament for Ciudadanos.

â€œI donâ€™t think Mr. Illa and the Socialists have reason to be pleased about how they have managed the pandemic.â€

If the polls are borne out, the Socialists would, at the very least, rebuild their Catalan electoral base and become the prime unionist force. With a markedly less combative approach to the sovereignty issue than Ciudadanos, the tensions of recent years would likely slacken.Â Â

Victory for Illa would be a major coup, although a fragmented parliament means there is no guarantee he would be able to form a unionist government, having to gather support from across the political spectrum.

Vox has said it would support Illa in an investiture vote in order to stop what it calls â€œthe coup-mongers,â€ or nationalists, from governing, but the backing of the far right would be deeply uncomfortable for PSC, which would also need other parties to get on board.

â€œThere could be a repeat of the pro-independence majority which we have had until now, with the coalition between JxCat and ERC,â€ he said, a situation that would make Illa the main opposition leader.

â€œOr ERC could open itself up to form a different kind of majority, to the left,â€ he added.

During the campaign, both ERC and the Socialists ruled out governing Catalonia together and Pedret, the Socialist member of the regional parliament, described their differences on the sovereignty issue as â€œa radical incompatibility.â€

However, many observers dismiss such talk as campaign rhetoric.

From their opposing sides of the secessionist dispute, both are championing moderation, with ERC rejecting the unilateralism of JxCat, led from Belgium by former Catalan President Carles Puigdemont, and promoting a more gradual and consensual approach to independence.

Moreover, ERC and the Socialists are already working together in Madrid.

The ERCâ€™s support in the Spanish parliament in early 2020 was key in enabling SÃ¡nchez to form a coalition administration with Unidas Podemos, on the understanding that a series of negotiations would ensue aimed at resolving the Catalan crisis.

The pandemic has meant those talks have barely got off the ground, but the Spanish government has appeared to make some concessions: It is processing requests for pardons for nine imprisoned independence leaders, as well as proposing a revision of the penal code that could benefit them.

Podemosâ€™s Catalan wing, En ComÃº Podem, has appealed for a three-way governing deal, reminding the PSC and ERC that the two worked together in coalition between 2003 and 2010.

Speculation about a repeat of that possible deal has been so intense that a hard-line nationalist platform has convinced all pro-independence parties to pledge they will not govern with PSC.

It is not clear how binding such promises will be after the election, and it is possibleÂ Spainâ€™s former health minister could be tempted to endorse a new leftist Catalan government led by ERC.

If so, the â€œIlla effectâ€ could be profound, helping the region embark on a very different course from the binary politics of recent years.