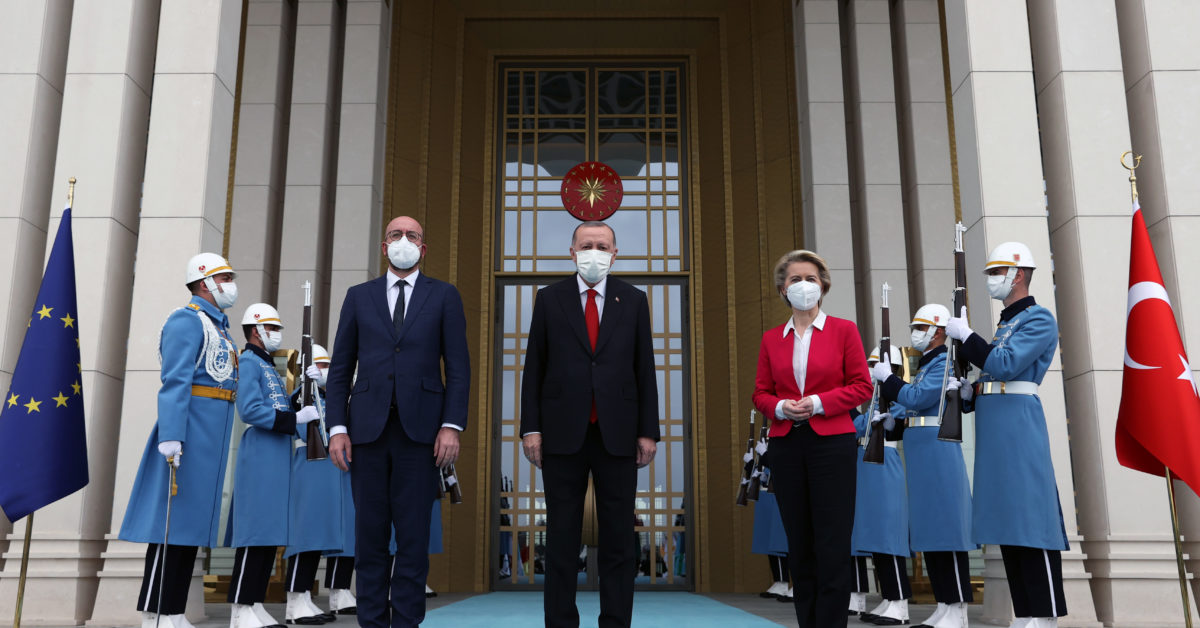 Sofagate was bad, but it could have been worse.

The new details emerged amid a widespread backlash to the SofagateÂ affair, in which Michel took a seat next to Turkish President Recep Tayyip ErdoÄŸan during a photo-op, while von der Leyen was awkwardly relegated to a sofa.

According to members of the European delegations, a working lunch the leaders held that day almost became another diplomatic status snafu. Ahead of the lunch, the Turkish hosts set up two tall chairs â€” one for each side â€” with backrests â€œabout twice as high as those of the others,â€ as one person familiar with the events said.

Alongside these were eight normal-sized chairs â€” four apiece. The EUâ€™s tall chair was reserved for Michel, the delegation leader, while the four regular chairs were meant for his aides: his outgoing and incoming diplomatic advisers, the head of the EU delegation in Turkey, Nikolaus Meyer-Landrut â€” and von der Leyen herself. On ErdoÄŸanâ€™s side, there were four advisers but no counterpart for the Commission president, not even the foreign minister.

Two flags â€” one Turkish, one EU â€” were placed by the tall chairs.Â

That was the setup until a member of the EU delegation intervened â€” just before the lunch started and the first female Commission president was relegated to the status of Michelâ€™s note-taker.

Von der Leyenâ€™s new diplomatic adviser, Fernando Andresen Guimaraes, elbowed in, arguing he was needed in the room as he was carrying his bossâ€™s bag and she would need it during the working lunch. He urged the hosts to fetch another tall chair, and to add a normal one for him so von der Leyen would also have an aide by her side. Both requests were fulfilled, according to EU delegation members, with no resistance. Andresen Guimaraes then placed the flag between the two EU presidential seats.

Youâ€™ve got to be in it to win it

Yet in an internal report on Sofagate, dated April 7 and shared with reporters, the Councilâ€™s protocol chief Dominique Marro (who was not part of the Ankara delegation) appeared to claim his team had, in fact, come to the Commission presidentâ€™s rescue.

In the lunchroom, â€œwe had the chair sizes for the three VIPs restored in favour toÂ la PrÃ©sidente,â€ he wrote, with the â€œweâ€ seemingly a reference to Council officials.

Or was it? A Council official told Playbook the â€œweâ€ in the note referred to the â€œEU side,â€ and the report was not â€œincriminating nor excluding anybody.â€ Marro, in the Council note, listed a few more things they would have liked done on von der Leyenâ€™s behalf, including suggesting â€œto our hosts to replace the sofa with two chairs, as a courtesy to the President of the Commission.â€ These suggestions, however, were never made.

The Commissionâ€™s own protocol service, â€œwhich is generally in charge of the missions of the President of the Commission, was absent,â€ the Council note said pointedly.

And Turkey, it added, interpreted the diplomatic protocol too strictly. Technically, the Council president ranks above the Commission president, but in diplomatic practice, the two are usually treated equally.

â€œThe protocol of third countries, in general, makes a clear distinction between the status of Head of State, recognized to the President of the European Council, and that of Prime Minister, which is recognized to the President of the Commission, which could be at the origin of the difficulty,â€ the Council report said, again blaming the hosts for the situation, as Michel himself did.

Turkeyâ€™s Foreign Minister MevlÃ¼t Ã‡avuÅŸoÄŸlu, who ended up sitting on another couch opposite von der Leyen during the Sofagate meeting, on Thursday pushed back against assertions that Turkey had misread the diplomatic protocol, insisting it wasnâ€™t Ankaraâ€™s fault von der Leyen was mistreated.

â€œIn the protocol, the demands of the EU party have been met here. Such a seating arrangement has been arranged upon the suggestions of the EU,â€ Ã‡avuÅŸoÄŸlu said at a press conference on Thursday, calling the accusations against Turkey â€œunfairâ€ and adding that protocol officials â€œmeet and discuss the arrangement before each visit.â€

Alas, the EU protocol team Ã‡avuÅŸoÄŸlu referred to was the European Council squad, whose protocol chief said in its report that while â€œthe Councilâ€™s protocol service was presentâ€ at a preparatory meeting on Monday, it was the only participant from the EU side. The Commission said that due to coronavirus restrictions, it hadÂ not sent its own advance team, assuming von der Leyenâ€™s interests would be respected.

Adding to the confusion was an apparent disconnect between the Council team and the local EU delegation in Turkey. The local delegation, an EU diplomat said, was â€œsidelined in the preparationsâ€ after Michelâ€™s people arrived. Thatâ€™s the impression the EU embassy itself shared.

And when Turkish and EU officials held a final meeting on Monday to go over protocol and security at ErdoÄŸanâ€™s presidential palace, they werenâ€™t able to see the key rooms.

â€œA brief tour of the premises took place but the meeting and lunchrooms were not accessible,â€ the Council report said. Meyer-Landrut said the same in his cable.

Normally, von der Leyen and Michel could discuss this sort of snafu at their weekly tÃªte-Ã -tÃªte, scheduled for every Monday. But the Council chief canceled their upcoming meeting without specifying why, Commission officials said.