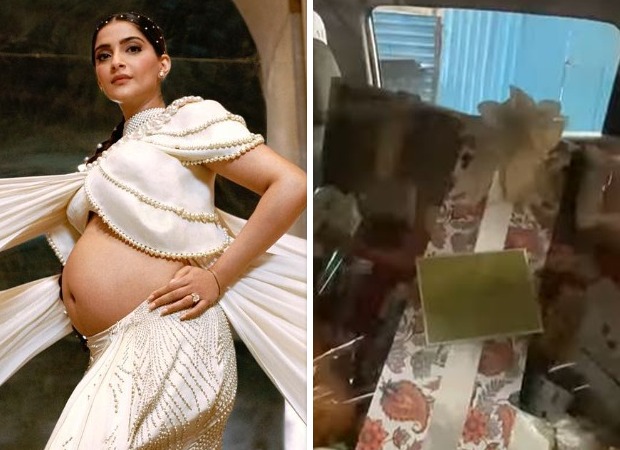 Just a day ago we had reported that a lavish baby shower is being planned for mom-to-be Sonam Kapoor by her family in Mumbai. The actress, who is currently enjoying some quality time with husband Anand Ahuja in London and also doing preps for the arrival of their first child, will be returning to the city soon. And to make it all the more special, her family is holding a rather lavish baby shower at Sonam’s aunt Kavita Singh’s bungalow in Bandra, Mumbai.

Now confirming the news, a video was captured by the paps where we get a glimpse of the exclusive invites while they were being sent to the guests for the baby shower. The luxurious and fancy invite is a hamper that seems to include a host of products. Here, have a look at the video:

A day ago, we had revealed that the baby shower will be a star-studded affair with names of Kareena Kapoor Khan, Deepika Padukone, Alia Bhatt, included in the guestlist. Besides them, the entire Kapoor family including cousins Janhvi Kapoor, Khushi Kapoor, Arjun Kapoor, Shanaya Kapoor are expected to be part of the celebrations.

Sonam Kapoor and Anand Ahuja are expecting their first baby and made the announcement on Instagram in March 2022. The couple, who tied the knot in May 2018, have been excited about their first baby and the actress also posted several photos and videos during pregnancy. After taking off on a babymoon, a small and private baby shower was planned by her sister Rhea Kapoor and her friends in London which even saw singer Leo Kalyan perform at the ceremony.

On the work front, Sonam Kapoor was last seen in the Dulquer Salmaan starrer The Zoya Factor.

Also Read: Another baby shower for Sonam Kapoor? Actress may have star studded shower in Mumbai with Deepika Padukone, Alia Bhatt as guests