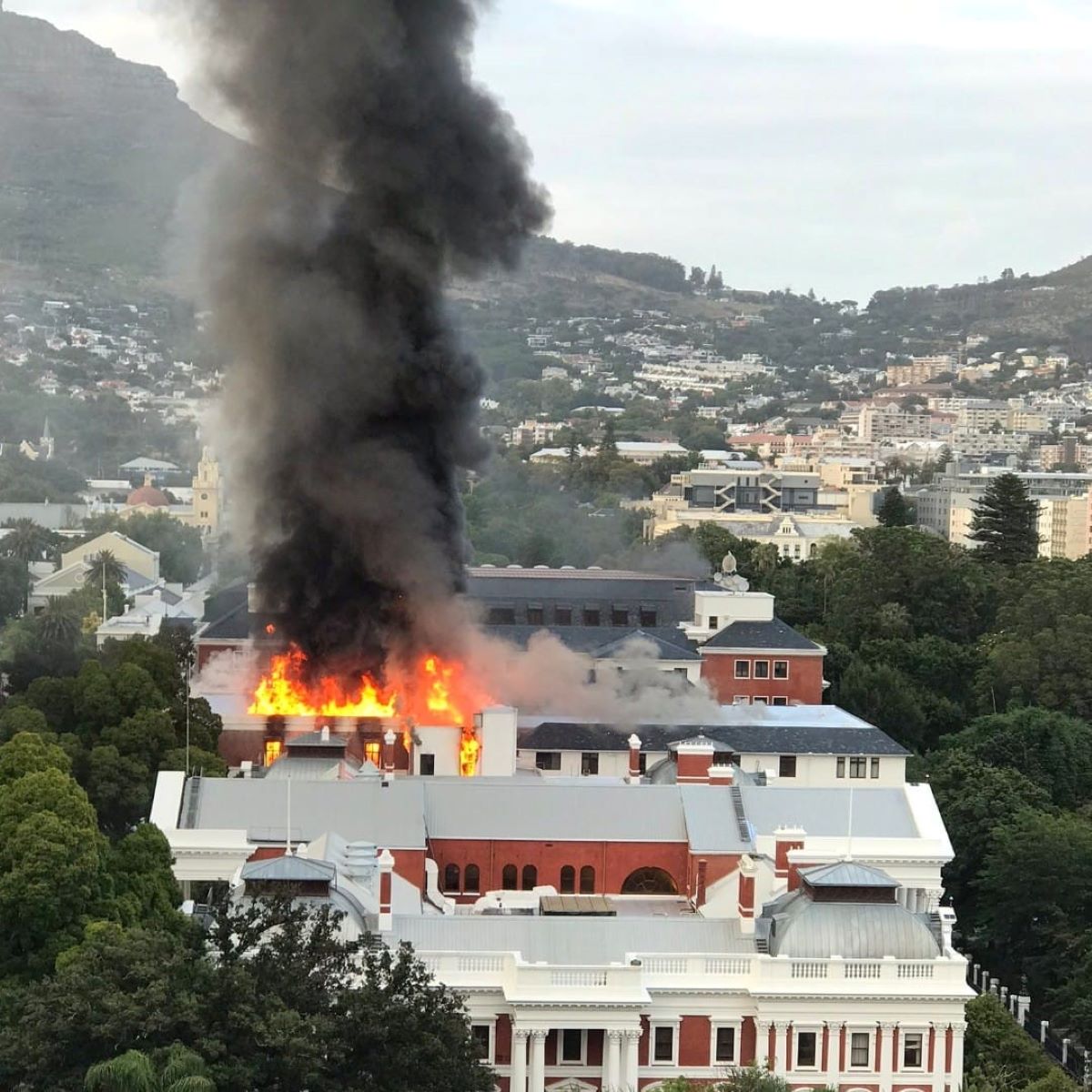 A lot can change overnight, or over the course of one weekend, but weâ€™ll keep you in the know with the latest news stories and headlines in South Africa on Monday, 3 January 2022.

Sunday has genuinely been a sad day for democracy in South Africa after a fire gutted parts of the Parliamentary precinct today.

On Sunday evening, firefighters were still battling to extinguish the fire. According to a statement, firefighters fought the blaze throughout the day, bringing under complete control fire in the NCOP offices, and continued to battle the flames in the NA Chamber and some offices severely gutted by fire. Significant damage has been caused to the New Assembly Wing, which includes the NA Chamber. The fire in these areas has almost been extinguished.

President Cyril Ramaphosa visited the scene and confirmed an investigation into the matter has been launched, and an arrest has been made.

Meanwhile, the EFF wasted no time jumping on the bandwagon of the fire. They want the Parliament to be relocated to Tshwane.

Parliament Presiding Officers have called for calm in theÂ aftermath of the fireÂ at the National Assembly. In an update on the incident, the officials assured South Africans that every effort is being made to ensure Parliament work continues.

â€œThe Presiding Officers of Parliament are assuring the citizens of South Africa that all efforts will be made to limit any disruption of the business of Parliament following the fire that gutted parts of the Parliamentary precinct today.â€

The statement confirmed that the fire had taken place at a point in time when preparations for the 2022 State of the Nation Address and Budget speech were â€˜at an advanced stageâ€™.

â€œThe Presiding Officers have confirmed that these flagship programmes of Parliament will not be affected by this unfortunate incident.â€

The Speaker of the National Assembly (NA), Ms Nosiviwe Mapisa-Nqakula, and the Chairpersons of the National Council of Provinces (NCOP), Mr Amos Masondo commended theÂ Cape Town Fire and Rescue ServicesÂ for their swift response.

â€œHad it not been for their prompt response, the damage could have been much worse. They responded within six minutes after they were called and alerted.â€

TheÂ Economic Freedom FightersÂ (EFF) wasted no time on Sunday to turn the devasting fire at the Parliament into a bid to push their agenda of having the Parliament relocated to Tshwane.

According to the EFF, the relocation would undermine what the thieving founders of the Union of South Africa sought to achieve in seeking peace amongst themselves by splitting the land they stole.

â€œAs much as we note the fires with concern, the EFF has long called for Parliament to be relocated to a central location for political and cos-related reasons.

â€œPolitically, the location of the legislature of South Africa in the City of Cape Town while under the administration of the country is located in the Tshwane was a deal brokered by British and Afrikaner settlers upon the establishment of the Union of South Africa. This came to post the Anglo-Boer War as a means of splitting the resources of this country between two settlers nations, at the exclusion of Africans.

â€œTo maintain this colonial pact of how we organise our society is nothing but a betrayal of African people and a reaffirmation that white-racist spatial and political planning still over-determines our lives in this country,â€ the party said in a statement.

The EFF has been trying to get the Parliament relocated to Tshwane since 2016. The party supported former President Jacob Zumaâ€™s proposal to relocate Parliament to Pretoria to create one capital city but said the party has consistently raised this issue.

Was it arson? Mapisa-Nqakula expresses concerns over Parliament Fire

House Speaker Nosiviwe Mapisa-Nqakula has addressed claims that the fire which gutted Parliament on Sunday was actually a deliberate act. The senior politician, however, has cautioned against those who are already calling this incident an arson attack.

Mapisa-Nqakula was speaking to the media earlier this afternoon, with the fire still ripping through Cape Townâ€™s iconic democratic centre. Although she didnâ€™t want to perpetuate any unsubstantiated claims, the Speaker did state that any purposeful attempt to start the blaze would be â€˜an attack on SAâ€™s democracyâ€™.

One person has been arrested on Sunday, and President Ramaphosa hailed the swift work of crime scene investigators deployed by SAPS. With a national key point burning to the ground, NMN did not hold back with her emotive take on the situation.

â€œIâ€™m concerned about the issue thatâ€™s trending that parliament is under attack, I think it would be a sad day for South Africa, or anyone, to have an idea let alone the intention to go and attack such an institution.â€

It has been a tough week forÂ police MinisterÂ Bheki Cele. His unpopularity among South Africans flared up yet again after he recently made some pretty coarse comments and warning that those who break curfew rules to ring in the New Year will be severely punished.

His powertrip did not last long as the curfew restriction was scrapped a day later. But this did not stop him from threatening to shut down celebrationsÂ left, right, and centre.

So when the entertainment blogger Khawula posted videos on Twitter on Friday evening claiming Cele was at Coco nightclub in Cape Town with his daughter Khumbuza Cele, South Africans jumped at the chance to criticise him. Some said Cele was hypocritical because he often called for stricter restrictions on alcohol sales in South Africa.

Others were very critical that the woman dancing in the video clip didnâ€™t seem to be wearing any underwear.

Cele toldÂ eNCAÂ on Saturday the woman in the video is not his daughter but has the same name as his daughter. He also said he wants Khawulaâ€™s claims to be retracted.

A top municipal employee has landed himself in deep trouble after he faked his qualification in the hopes of scoring a top post at a municipality.

Nketoane Municipality chief financial officerÂ Xolani Malindi, 34, applied for a job as a municipal manager in the Free State province. Unfortunately, his decision to forge his qualifications ultimately earned him a visit from the Hawks.

Malindi appeared before the Reitz Magistrateâ€™s Court on Wednesday facing charges of fraud.

â€œMalindi submitted his application for the post. It was discovered during the shortlisting process that the qualification attached to his application was allegedly fraudulent.â€

This discovery was ultimately reported to theÂ HawksÂ serious corruption investigation team based in Bloemfontein.