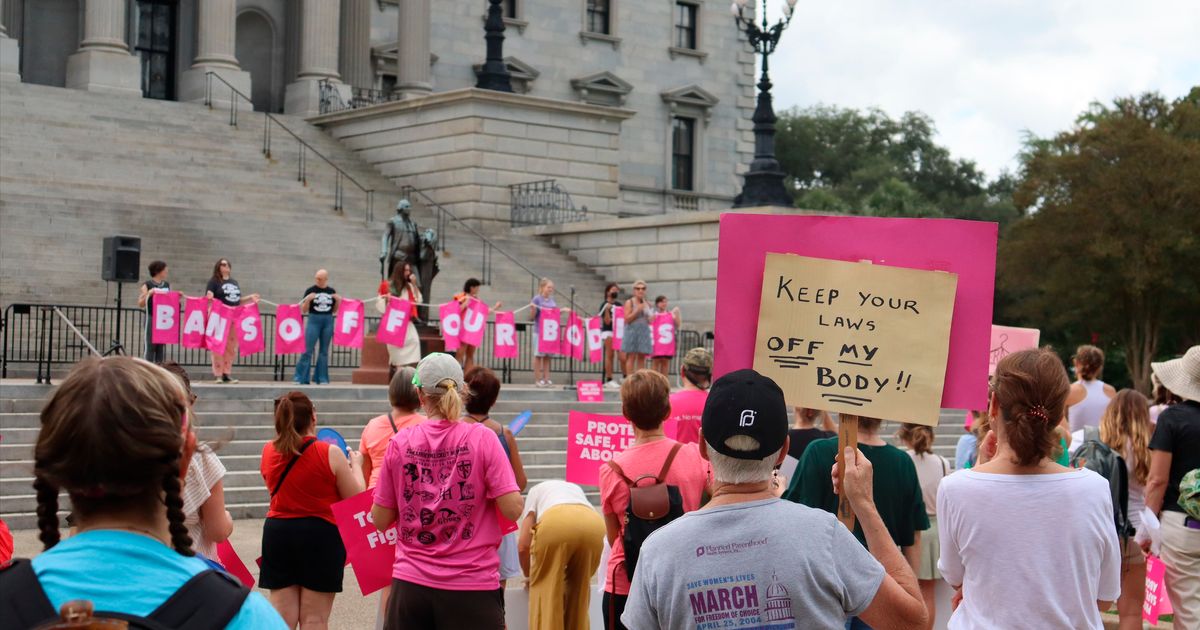 COLUMBIA, S.C. (AP) — The South Carolina House on Tuesday approved a bill that outlaws abortion except in the cases of pregnancies caused by rape or incest.

The chamber initially rejected the bill without the exceptions by eight votes. But once Republicans saw the outcome, they quickly went through a number of complex procedures and votes to bring the bill back from the brink of failure.

The exceptions were added by enough lawmakers shouting “aye” and the bill passed by a vote of 67-38.

The bill has one more routine vote before it goes to the Senate, where stricter bans on abortions have seen tougher fights.

The bill allows abortions up to 12 weeks after conception if a women tells a doctor she was raped. The doctor has to tell the woman he is going to report the rape to the county sheriff and has 24 hours after the procedure to give deputies the woman’s name and contact information. It also allows abortions to save a mother’s life.

Some of the House’s most conservative lawmakers said Monday they would not support a bill with the rape and incest exceptions, but when it came to a final vote, they changed their minds.

“But here’s the thing — at the end of the day we passed a good pro-life bill in South Carolina,” said Republican Rep. John McCravy, who shepherded the bill through the chamber.

The dizzying parliamentary maneuvers happened after Democrats joined with those conservatives to try to keep the bill as restrictive as possible.

Republicans accused Democrats of playing politics as they also voted down an amendment supporters said would allow abortions for women carrying fetuses with medical problems leaving them unlikely to be born alive.

“The ladies of South Carolina, they are gambling with your body,” Republican Rep Micah Caskey said.

Democrats said they didn’t want to debate abortion again after the General Assembly agreed to a six-week ban in 2021, but Republicans decided to call a special session after Roe v. Wade was overturned.

“It is not our bill. We’re not the ones trying to control their bodies,” Democratic Rep. Leon Stavrinakis said.

The leader of a non-profit organization that fights for women’s health and economic rights was offended that Republicans saw the debate as a game.

“We’ve got to get past the point of seeing this as a political game and start seeing the impact it has on real peoples lives. And I’m afraid that’s been lost in the Statehouse today,” said Ann Warner, CEO of the Women’s Rights and Empowerment Network.

Republicans who have nearly twice as many members as Democrats, took an hour break just before the vote to get their most conservative members to agree to the exceptions.

Other changes voted down in the debate included language supporters said would protect in vitro fertilization and birth control, and proposals that would allow prosecutors to charge a women who gets an abortion with murder.

About 100 people gathered in the Statehouse lobby for the debate. They chanted phrases like “Abortion is health care” and “My body, my choice” and drew honks from passing cars. Law enforcement closed the House gallery Tuesday.

South Carolina currently has a six-week ban but the South Carolina Supreme Court suspended the law earlier this month while the justices decide on a Planned Parenthood lawsuit that says the ban is an unreasonable invasion of privacy under the state constitution. The decision leaves South Carolina’s abortion ban at 20 weeks for now.

Earlier in August Indiana passed a near-total ban set to take effect Sept. 15 with exceptions for rape, incest and if the mother’s life is in danger. West Virginia’s House and Senate couldn’t agree on stricter abortion rules in a July session.

Thirteen states have so-called trigger laws designed to outlaw most abortions when the U.S. Supreme Court threw out the constitutional right to end a pregnancy in June.

South Carolina leaders have watched those developments carefully, as well as events several weeks ago in Kansas, where nearly 60% of voters rejected a ballot measure that would have allowed the state’s conservative Legislature to ban abortion. Republican Donald Trump received 56% of the 2020 presidential vote in Kansas. Trump won 55% in South Carolina.

The bill currently allows abortions if a mother’s life is in danger and then lists a number of different medical emergencies that would fit into that exception.

Republican Gov. Henry McMaster hasn’t given his opinion on this specific bill but has said he would like to see a day where there are no abortions in the state.

“This is a good starting point for the Senate to begin its deliberations,” McMaster’s spokesman Brian Symmes said.

Pollard is a corps member for the Associated Press/Report for America Statehouse News Initiative. Report for America is a nonprofit national service program that places journalists in local newsrooms to report on undercovered issues.