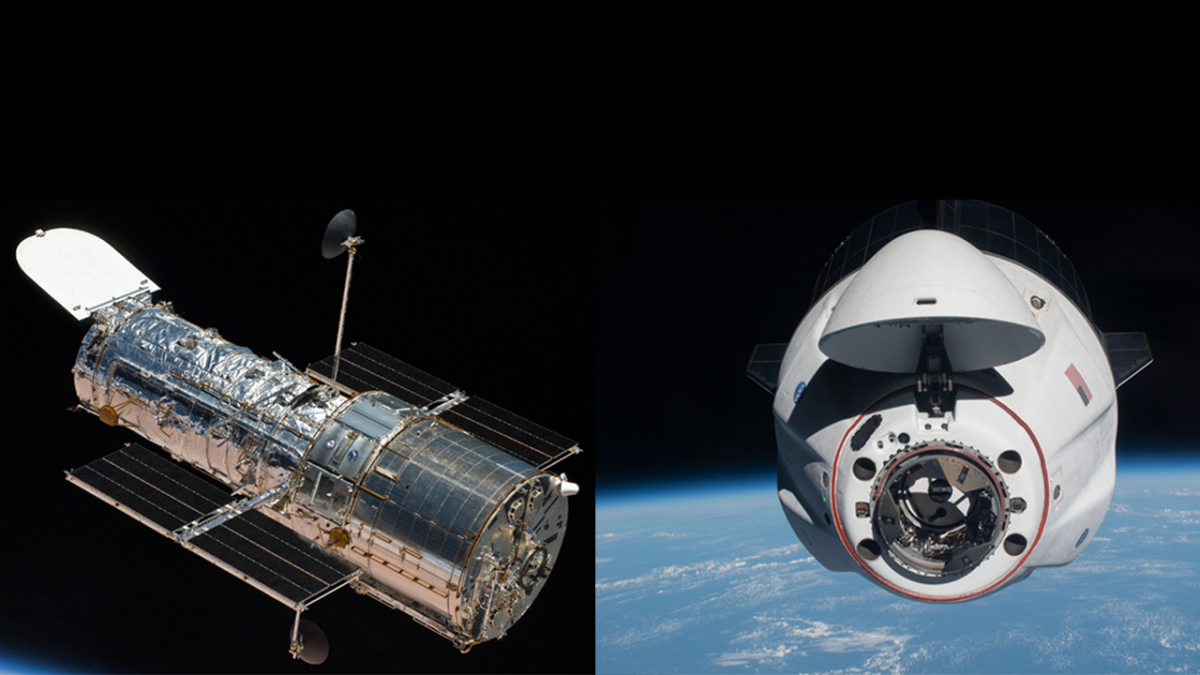 Astronauts could visit the Hubble Space Telescope again someday, this time on a private spacecraft.

Hubble launched to Earth orbit in April 1990 and received five sets of visitors over the next two decades. These astronaut crews, who arrived on NASA space shuttle missions, repeatedly repaired, maintained and upgraded the iconic scope, allowing it to continue observing the heavens with groundbreaking clarity to this day.

NASA retired its space shuttle fleet in 2011, but a new era of Hubble servicing missions may be about to dawn. The agency announced today (Sept. 29) that it’s conducting a joint study with SpaceX to look into sending a Dragon capsule to Hubble, to boost the observatory’s orbit and perhaps assist it in other ways as well.

“We want to benefit Hubble. And if benefiting Hubble means not just boosting it but also providing some servicing, and that can be done with a human spaceflight mission, all the better,” Jessica Jensen, vice president of customer operations and integration at SpaceX, said during a press conference today. “So, it’s all on the table.”

To be clear: No SpaceX mission to Hubble is currently in the works. The new announcement concerns a feasibility study, which is expected to last six months and involves no NASA money. (The agency is participating via an unfunded Space Act Agreement.)

“We’re going to be looking at Dragon capabilities and how they would need to be modified in order to safely rendezvous and dock with Hubble,” Jensen said. “Details of exactly physically how that’s done, and how we also safely do that from a trajectory point of view — that’s all to be worked out.”

And a Dragon Hubble mission, should it come to pass, wouldn’t necessarily need to be crewed, she added. The feasibility study might point planners toward an uncrewed mission, with Dragon or perhaps even a different type of vehicle.

Hubble is in good health and continues to return amazing and informative photos of the cosmos. Just the other day, for example, it snapped photos of the Didymos asteroid system shortly after NASA’s DART probe intentionally slammed into one of its two constituent space rocks.

But Hubble’s orbit has decayed a bit over the past 33 years due to atmospheric drag. The telescope currently zooms around Earth at an altitude of about 335 miles (540 kilometers), roughly 38 miles (60 km) lower than its initial orbit.

At its current altitude, Hubble has a 50% probability of falling back to Earth in 2037, Patrick Crouse, Hubble project manager at NASA’s Goddard Space Flight Center in Maryland, said during today’s briefing.

NASA won’t let things come to that, however; the agency plans to deorbit Hubble in a controlled fashion when its observing days are done. That will require launching a robotic mission to the telescope to haul it down safely. NASA would likely aim to launch the deorbit mission by the end of the 2020s, Crouse said.

But that’s without an orbit boost. Getting Hubble back up to its initial altitude of 373 miles (600 km) could potentially allow the observatory to keep working for many more years to come.

“You’d add easily 15 to perhaps 20 years of orbit life to the mission if you could achieve that altitude,” Crouse said.

If the feasibility study returns promising results, a Dragon mission to Hubble could launch sooner than you might think. Indeed, there’s already an architecture in place that could accommodate such a flight — the Polaris Program, a set of three SpaceX missions organized and led by billionaire entrepreneur Jared Isaacman, who commanded the history-making Inspiration4 mission to Earth orbit last year.

Polaris will consist of three missions, the first of which, Polaris Dawn, will send Isaacman and three crewmates to orbit in a Dragon as early as March 2023. That flight will feature the first-ever private spacewalk and send Dragon farther from Earth than any crewed mission has gotten since the Apollo era.

The second and third Polaris missions remain relatively undefined at the moment, though we know Polaris 2 will fly on a Dragon and Polaris 3 will employ Starship, the huge vehicle that SpaceX is developing to take people to the moon and Mars.

The Polaris program aims to demonstrate and advance human spaceflight capabilities. And a trip to Hubble would definitely fit that bill, according to Isaacman.

“Certainly, the idea of boosting and servicing Hubble, should the feasibility study support it, would be, you know, a logical second mission,” he said during today’s briefing.