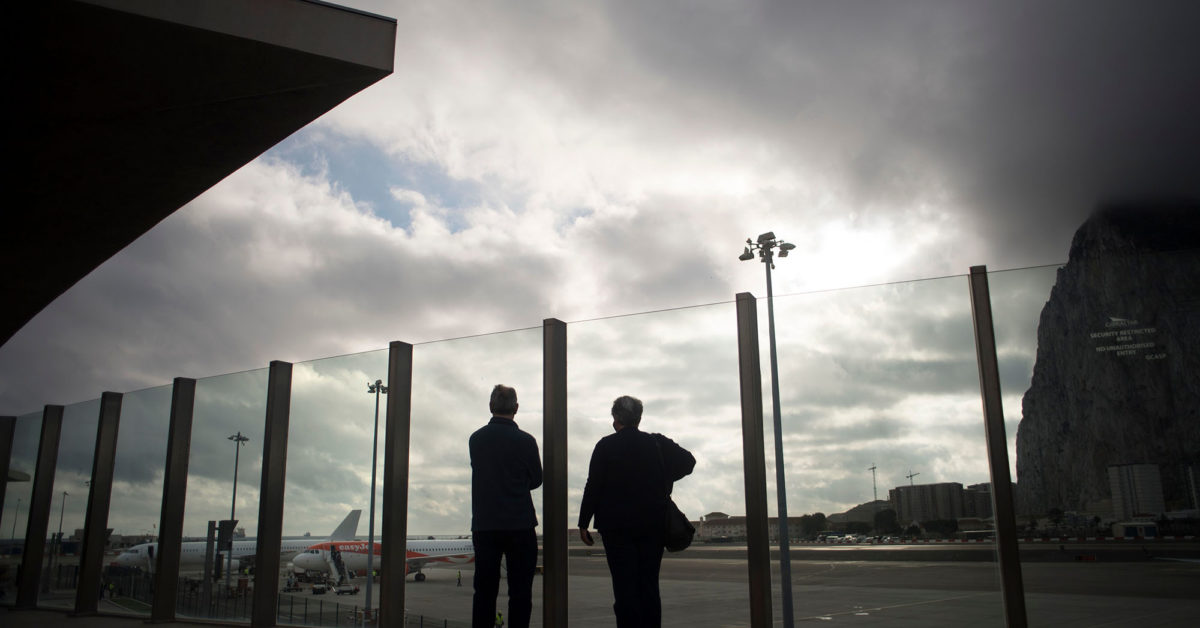 LONDON â€”Â Spain and the U.K. have struck an eleventh-hour deal to avoid a hard border in Gibraltar as the Brexit transition draws to an end.

Under the terms of the deal, Gibraltar will be part of the Schengen passport-free area with the sponsorship of Spain, the countryâ€™s Foreign Minister Arancha GonzÃ¡lez Laya announced Thursday. This is necessary because unlike Liechtenstein, for example, Gibraltar is not an independent state.

This means British citizens will need to go through a Schengen border post to enter Gibraltar through its airport and seaport. During a four-year transition, the European Border and Coast Guard Agency, called Frontex, will patrol both access points.

The patrolling of the border posts had been one of the most controversial points of the negotiations over Gibraltarâ€™s future, with Spain insisting that Frontex should report to the Spanish authorities. GonzÃ¡lez Laya, however, declined to reveal any more technical details or the terms of the deal after the transition ends, saying she wants to brief the Spanish parliament first.

â€œWe have reached an agreement in principle with the United Kingdom that will lay the groundwork for a new relationship,â€ GonzÃ¡lez Laya said at a press conference. The Spanish minister added all parties had understood the need to cooperate with each other, and to leave their â€œinalienableâ€ sovereignty disputes aside.

The negotiations have lasted months and turned sour at times. As of Wednesday, the U.K. Minister for the European Neighborhood Wendy Morton said that no deal had been struck yet. GonzÃ¡lez Laya acknowledged that there was a â€œvery intense evening and a very long nightâ€ before a deal was struck in the early hours of Thursday morning.

Although the U.K. and the EU have concluded a future relationship agreement, the future of Gibraltar had to be settled in parallel negotiations between London, Madrid and the Rock.

The deal reached Thursday has been submitted to the European Commission, which must transform it into an international treaty between the EU and the U.K., in a process that GonzÃ¡lez Laya expects to last about six months. There will not be changes at the border during this period, the Spanish minister said.

U.K. Foreign Secretary Dominic Raab confirmed in a statement that the U.K., Spain and Gibraltar had reached agreement on a â€œpolitical frameworkâ€ to form the basis of a separate treaty between the U.K. and the EU on Gibraltar.

â€œWe remain steadfast in our support for Gibraltar, and its sovereignty is safeguarded,â€ the statement said. â€œI am grateful to Foreign Minister Laya and her team for their positive and constructive approach. We have a warm and strong relationship with Spain, and we look forward to building on it in 2021.â€

Gibraltarâ€™s Chief Minister Fabian Picardo said the deal will allow for â€œmaximized and unrestricted mobilityâ€ of people between Gibraltar and the Schengen area.

â€œThis has been a difficult process. We have been battling the tide of history, but with this agreement in principle we hope to start to see the future come into view. We are at the beginning of the creation of an area of shared prosperity,â€ he said.

PicardoÂ praised Spanish Prime Minister Pedro SÃ¡nchez for â€œinsisting that he wanted to go beyond the eternal issue of sovereignty,â€ and British premier Boris Johnson â€œwho has not forgotten Gibraltar in the Brexit negotiations.â€

Picardo said Gibraltar might reach additional deals with Spain in the future, but this should not be interpreted as the Rock drifting away from the U.K.

â€œThis is the beginning of us building a stronger relationship with theÂ European Union and with our neighbor Spain in a way that doesnâ€™t in any way cliff us away from the United Kingdom which is our principled relationship, the relationship that we want to nurture and grow, and we want to see endure in the best way possible,â€Â he said.