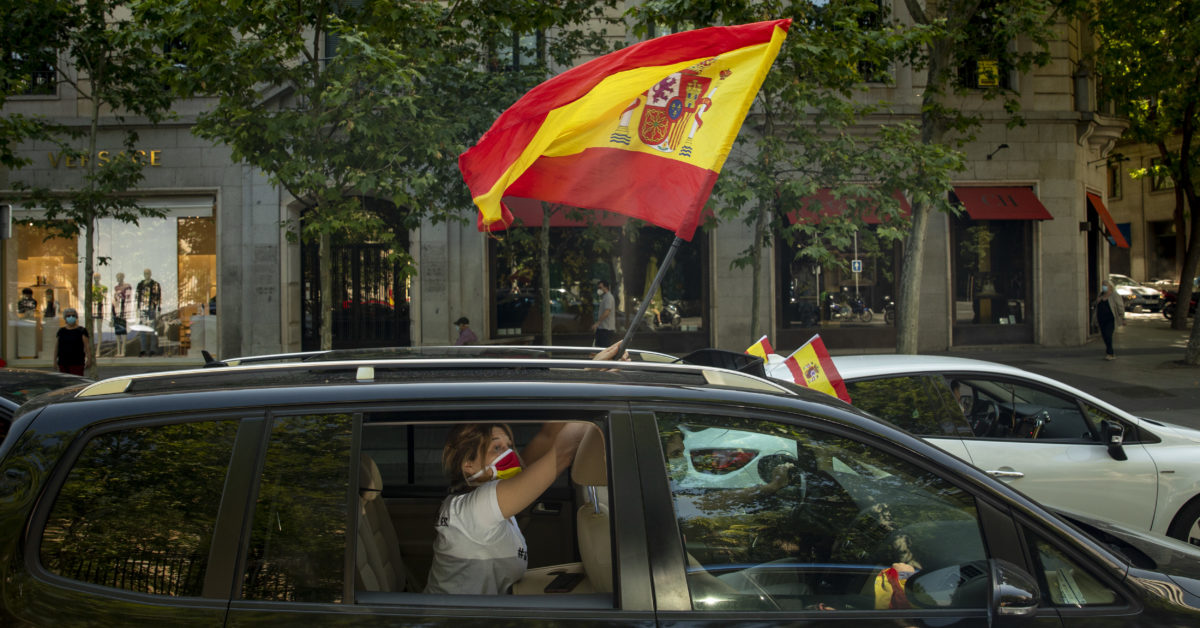 Spaniards took to the streets during the early hours of Sunday morning to celebrate the end of 202 days of nationwide coronavirus restrictions that had limited travel between regions, largely barred social gatherings and subjected citizens to curfews since last fall.

In scenes that recalled pre-COVID New Yearâ€™s Eve celebrations, thousands gathered in the central squares of most of the countryâ€™s cities to ring in the end of the â€œstate of alarmâ€ measures adopted by Prime Minister Pedro SÃ¡nchezâ€™s government on October 25 last year.

Videos on social media showed groups of people drinking and singing in Madridâ€™s Puerta del Sol, and in Seville local media reported that boisterous crowds broke out into a rendition of â€œBella Ciaoâ€ as the restrictions expired at midnight. In Barcelona, a senior municipal offical said that local police had evicted 6,500 people from 31 different street parties, as drinking alcohol in the streets is prohibited in the city.

The Spanish government decreed the â€œstate of alarmâ€ in an attempt to slow the spread of COVID-19 in the midst of the second wave that ravaged Europe last fall.

Shortly after enacting the measures, SÃ¡nchez set the goal of getting two-week infection rate below 25 cases per 100,000 inhabitants. The figure hovered around 170 per 100,000 on Sunday, a little less than half of what it was when the decree was enacted last fall, and the government decided enough progress had been made in the fight against the pandemic to relax the rules.

The nationwide measures were harshly contested by conservative leaders like Madridâ€™s regional president, Isabel DÃ­az Ayuso, who insisted on keeping the capitalâ€™s bars and restaurants open and accused SÃ¡nchez of attempting to suppress citizensâ€™ liberty with the restrictions.

Ayuso was reelected to a second term last week after a campaign largely focused on her opposition to the national government.

Madrid Mayor JosÃ© LuisÂ MartÃ­nez-AlmeidaÂ condemnedÂ the street parties and reminded revelers that outdoor drinking was prohibited in Madrid, adding that â€œfreedom is not defined by the breaking of rules.â€

The power to impose further coronavirus-related measures now passes to regional administrations, leading to differing restrictions throughout the country: while an 11 p.m. curfew is still in place in Navarra, no such rule exists in the neighboring region of AragÃ³n, for example.

The lifting of measures is expected to lead to an uptick in travel within Spain, where several regions had been sealed off for months in a bid to contain the virus. Online travel agency Rumbo.es reported that sales of vacation packages had shot up to 68 percent during the last week.

As in Spain, the easing of coronavirus restrictions in Belgium this weekend led to mass gatherings in cities like Brussels and Leuven on Saturday night, with thousands packing into restaurant and bar terraces that had been closed since the early fall.

Over 1,000 people gathered to party at Brusselsâ€™ in and around Place Flagey, setting off fireworks and reacting angrily when police attempted to clear the square during the early hours of Sunday morning. Only 10 people are meant to gather together outdoors, according to the latest Belgian rules.

Police charged the crowds and used a water cannon to disperse the revelers after officers were pelted with objects.

Belgiumâ€™s COVID-19 spokespersonÂ Yves Van Laethem, comparing the celebrations to a champagne cork popping off a bottle, said effusive mass-gatherings were to be expected but added that such scenes â€œmust not be repeatedâ€ if infection rates are to be kept low.