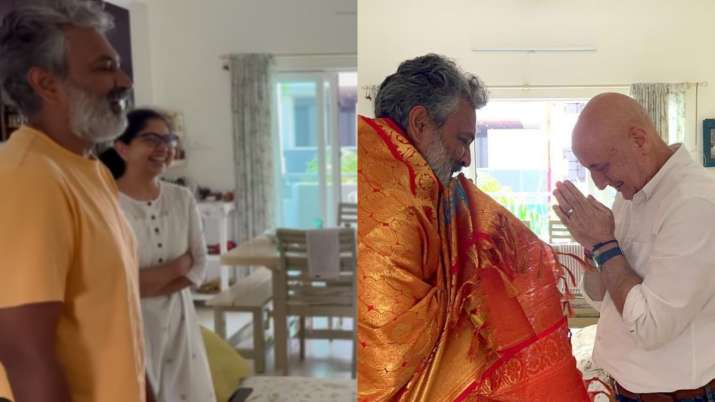 SS Rajamouli and his wife hosted veteran actor Anupam Kher at his Hyderabad home recently. The actor took to his Instagram handle and shared a glimpse of his meeting with the RRR director and his family. Kher was overwhelmed with their simplicity and penned a heartwarming note thanking him for his humility. He also expressed his happiness as he gifted them a traditional shawl. “Dearest #RamaJi and @ssrajamouli! Thank you for your love, warmth and delicious lunch at your place in Hyderabad! I was particularly happy to welcome you in your own house with a traditional shawl wrapping! I love your simplicity and humility. I feel blessed. So much to learn from both of you!! #Simple #Successful #Maverick,” the actor captioned the post.

Interestingly, through his video fans even got the chance to witness the interiors of SS Rajamouli’s home. With white interiors, sliding door windows, white painted walls and a lot of plants on the balcony, the house gave a very breezy vibe. Most of the users were impressed to see the down-to-earth lifestyle of the most successful director of Indian cinema.

Anupam Kher greeted the couple with a traditional orange shawl. SS Rajamouli’s wife Rama can also be seen in the video. In the video Kher can be seen putting a shawl around Rajamouli and saying, “How will you otherwise remember me more,” to which Rama replies, “How can we forget you?” In another photo, Rajamouli and Kher are seen greeting each other with folded hands. In the last picture, Kher poses with SS Rajamouli and his wife.

In no time, netizens showered their love on the post. One of them commented, “Warm smiles.” Another said, “Only you would value humanity with such deep gratitude.” A fan also mentioned, “What a beautiful moment.”

On the work front, Anupam Kher was last seen in Vivek Agnihotri’s The Kashmir Files. He will next be seen in Kangana Ranaut‘s film Emergency in which he will portray the role of late political leader Jayaprakash Narayan.