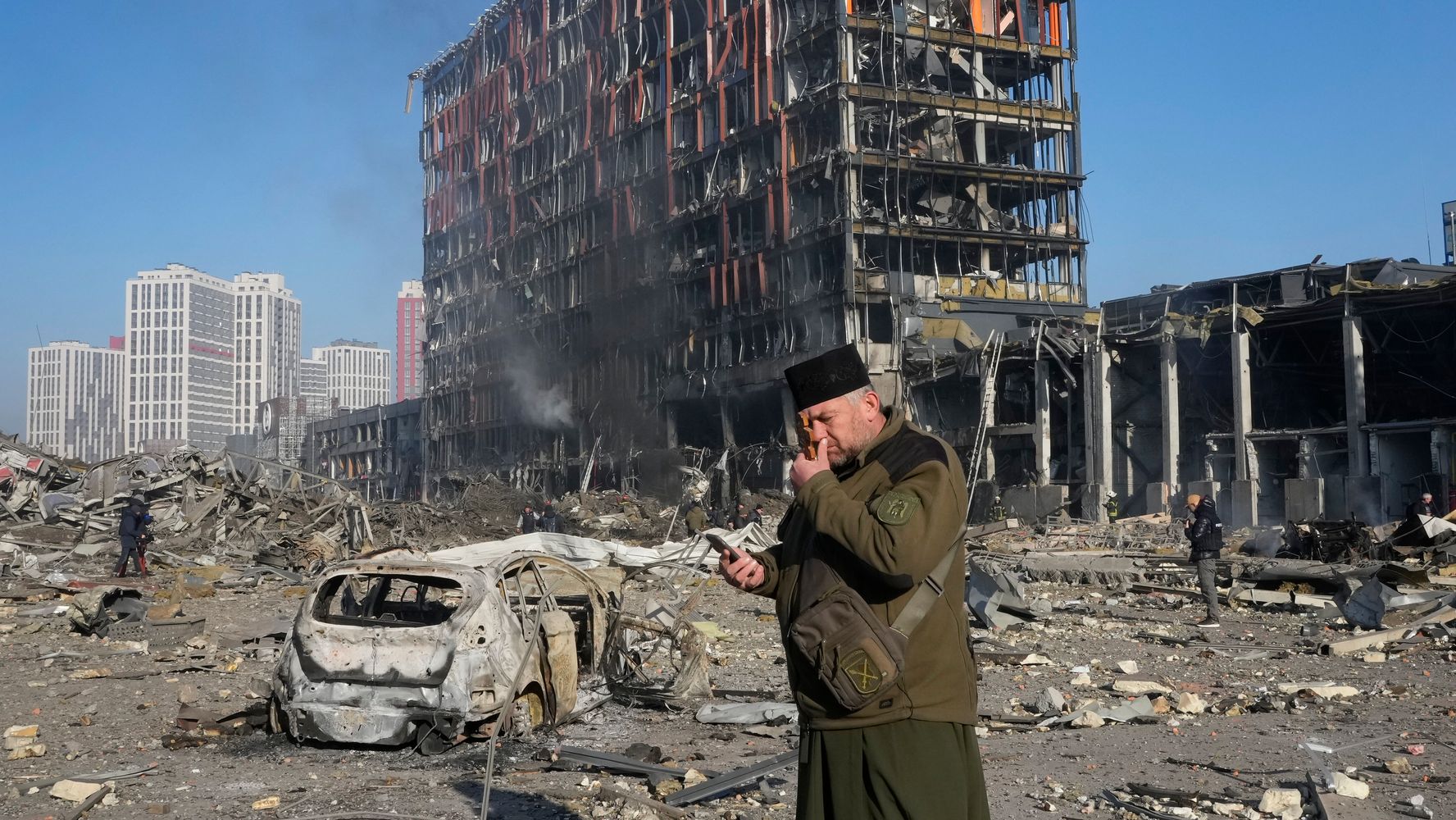 While Russian forces carried on with the siege after the cityâ€™s defenders refused demands to surrender, the Kremlinâ€™s ground offensive in other parts of the country advanced slowly or not at all, knocked back by lethal hit-and-run attacks by the Ukrainians.

The Ukrainian army said early Tuesday that it had forced Russian troops out of a strategically important Kyiv suburb following a fierce battle. The regained territory allowed Ukrainian forces to retake control of a key highway to the west and block Russian troops from surrounding Kyiv from the northwest.

But Ukraineâ€™s Defense Ministry said Russian forces battling toward Kyiv were able to partially take other northwest suburbs, Bucha, Hostomel and Irpin, some of which had been under attack almost since Russiaâ€™s military invaded late last month.

A senior U.S. defense official, speaking on condition of anonymity to discuss the militaryâ€™s assessment, said Russia had increased air sorties over the past two days, carrying out as many as 300 in the past 24 hours, and has fired more than 1,100 missiles into Ukraine since the invasion began.

In a video address Monday night, Ukrainian President Volodymyr Zelenskyy hailed those who have fought back against Russia.

â€œThere is no need to organize resistance,â€ Zelenskyy said. â€œResistance for Ukrainians is part of their soul.â€

In Mariupol, with communications crippled, movement restricted and many residents in hiding, the fate of those inside an art school flattened on Sunday and a theater that was blown apart four days earlier was unclear. More than 1,300 people were believed to be sheltering in the theater, and 400 were estimated to have been in the art school.

Perched on the Sea of Azov, Mariupol has been a key target that has been besieged for more than three weeks and has seen some of the worst suffering of the war.

But no clear, independent picture emerged of how close its capture might be. Ukraineâ€™s Defense Ministry said Tuesday that their forces were still defending the city and had destroyed a Russian patrol boat and electronic warfare complex.

Russia for now controls the land corridor from Crimea, the peninsula it annexed in 2014, and is blocking Ukraineâ€™s access to the Sea of Azov, the ministry said.

â€œNobody can tell from the outside if it really is on the verge of being taken,â€ said Keir Giles, a Russia expert at the British think tank Chatham House.

Over the weekend, Moscow had offered safe passage out of Mariupol â€” one corridor leading east to Russia, another going west to other parts of Ukraine â€” in return for the cityâ€™s surrender before daybreak Monday. Ukraine flatly rejected the offer well before the deadline.

Mariupol officials said on March 15 that at least 2,300 people had died in the siege, with some buried in mass graves. There has been no official estimate since then, but the number is feared to be far higher after six more days of bombardment.

For those who remain, conditions have become brutal. The assault has cut off Mariupolâ€™s electricity, water and food supplies and severed communication with the outside world, plunging residents into a fight for survival. Fresh commercial satellite images showed smoke rising from buildings newly hit by Russian artillery.

Mariupol had a prewar population of about 430,000. Around a quarter were believed to have left in the opening days of the war, and tens of thousands escaped over the past week by way of the humanitarian corridors. Other attempts have been thwarted by the fighting.

Those who have made it out of Mariupol told of a devastated city.

â€œThere are no buildings there anymore,â€ said 77-year-old Maria Fiodorova, who crossed the border to Poland on Monday after five days of travel.

Olga Nikitina, who fled Mariupol for the western Ukrainian city of Lviv, where she arrived Sunday, said gunfire blew out her windows, and her apartment dropped below freezing.

â€œBattles took place over every street. Every house became a target,â€ she said.

A long line of vehicles stood on a road in Bezimenne as Mariupol residents sought shelter at a temporary camp set up by Russian-backed separatists in the Donetsk region. An estimated 5,000 people from Mariupol have taken refuge in the camp. Many arrived in cars with signs that said â€œchildrenâ€ in Russian.

A woman who gave her name as Yulia said she and her family sought shelter in Bezimenne after a bombing destroyed six houses behind her home.

â€œThatâ€™s why we got in the car, at our own risk, and left in 15 minutes because everything is destroyed there, dead bodies are lying around,â€ she said. â€œThey donâ€™t let us pass through everywhere â€” there are shootings.â€

In all, more than 8,000 people escaped to safer areas Monday through humanitarian corridors, including about 3,000 from Mariupol, Deputy Prime Minister Iryna Vereshchuk said.

Russian shelling of a corridor wounded four children on a route leading out of Mariupol, Zelenskyy said.

In the Russian-occupied southern city of Kherson on Monday, Russian forces shot into the air and fired stun grenades at protestors who were chanting â€œGo home!â€ Kherson early this month became the first major city to fall to Russiaâ€™s offensive.

Ukrainian authorities also said Russia shelled a chemical plant outside the eastern city of Sumy, sending toxic ammonia leaking from a 50-ton tank, and hit a military training base in the Rivne region of western Ukraine with cruise missiles.

Russiaâ€™s invasion has driven nearly 3.5 million people from Ukraine, according to the United Nations. The U.N. has confirmed over 900 civilian deaths but said the real toll is probably much higher. Estimates of Russian deaths vary, but even conservative figures are in the low thousands.

Talks between Russia and Ukraine have continued by video but failed to bridge the chasm between the two sides. The Kremlin has demanded that Ukraine disarm and declare itself neutral. Zelenskyy told Ukrainian television late Monday that he would be prepared to consider waiving any NATO bid by Ukraine in exchange for a cease-fire, the withdrawal of Russian troops and a guarantee of Ukraineâ€™s security.

Zelenskyy also suggested Kyiv would be open to future discussions on the status of Crimea, which Russia seized in 2014, and the regions of the eastern Donbas region held by Russian-backed separatists. But he said that was a topic for another time, after a cease-fire and steps toward security guarantees.

Follow the APâ€™s coverage of the war at https://apnews.com/hub/russia-ukraine