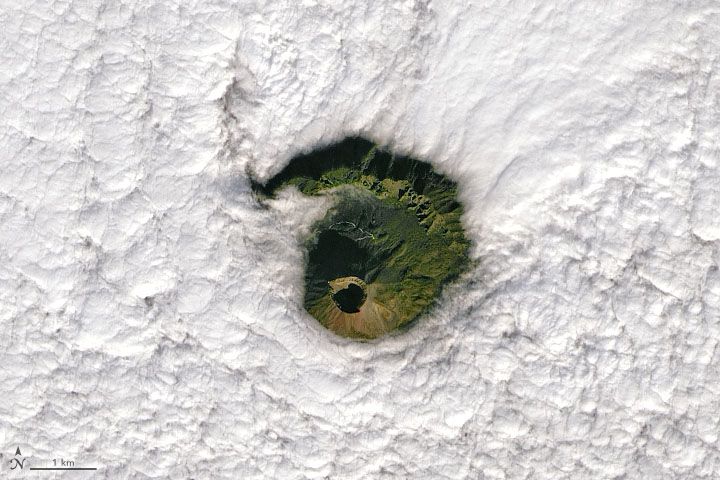 One of the world’s most dangerous volcanoes, Mount Vesuvius, appears to “peer up” into the sky through an eerily circular hole in the clouds in this striking satellite image.

The Operational Land Imager onboard the Landsat-8 satellite snapped the photo, which was released Jan. 10 by NASA’s Earth Observatory. The volcano’s summit caldera â€” a large bowl-like depression that forms when a volcano erupts and collapses â€” is clearly visible in the new image, as well as a section of large mountainous ridge to the north, which is a remnant of Mount Somma â€” an ancient volcano that once stood in the same spot as Mount Vesuvius, before the newer volcano’s cone grew from it’s center.Â

Mount Vesuvius is a stratovolcano, meaning that its cone is built from accumulating layers of lava and ash from previous eruptions. It is part of the Campanian volcanic arc, a string of volcanoes in Italy that sits on a boundary between tectonic plates, where the African plate is being subducted beneath the Eurasian plate. It is made up of multiple active, dormant and extinct volcanoes both on land and underwater, including Mount Etna in Sicily, which began erupting again in February 2021, Live Science previously reported.

Vesuvius’ most famous eruption simultaneously destroyed and preserved the Roman city of Pompeii, as well as the neighboring town Herculaneum, in A.D. 79. However, lava flows from its most recent eruption in 1944 destroyed the nearby village of San Sebastiano. In total, Mount Vesuvius has had eight major eruptions in the last 17,000 years, based on geological analysis of the layers of lava surrounding it, according to the Earth Observatory.Â

Despite remaining calm since its last eruption, Mount Vesuvius is still classified as an active volcano and occasionally experiences shaking from belowground earthquake activity and gas venting from its summit. It is regarded as one of the most dangerous volcanoes on the planet because any future eruption has the potential to destroy Naples, an Italian city located 7.5 miles (12 kilometers) northwest of the volcano, which is home to more than 3 million people.

In 2011, a study published in the journal Nature described Mount Vesuvius as “Europe’s ticking time bomb.”Â

The Landsat-8 satellite responsible for capturing the image is run by both NASA and the U.S. Geological Survey.