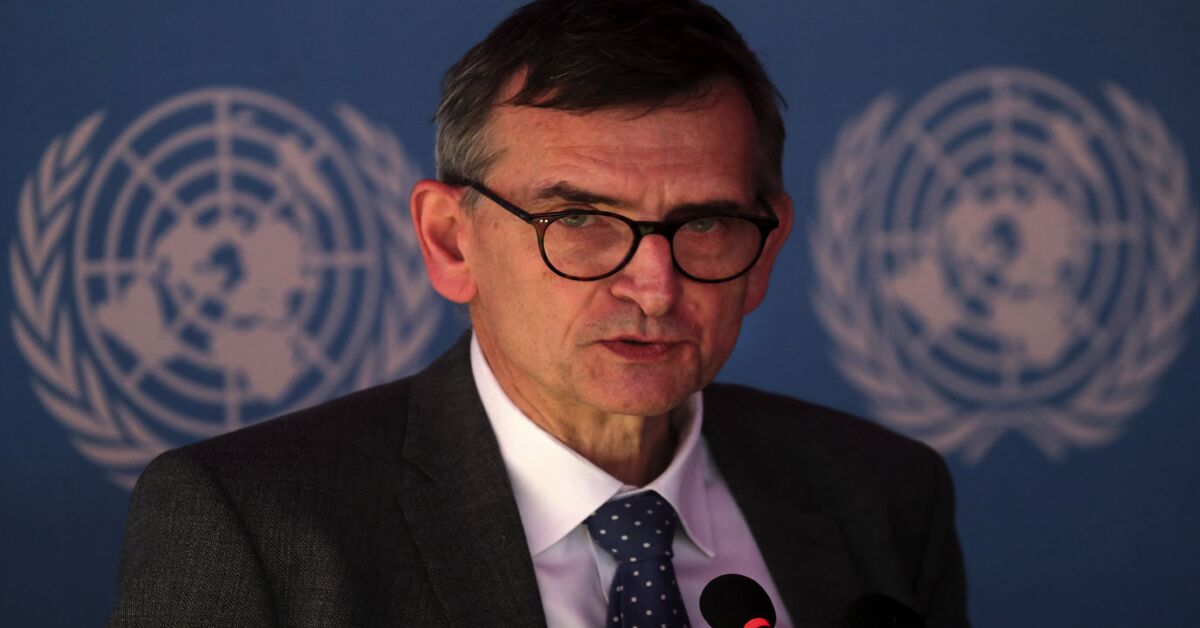 Following the resignation of Sudanâ€™s Prime Minister Abdalla Hamdok in early January, the head of the UN mission in the country, Volker Perthes, announced on Jan. 8. the launch of an intra-Sudanese political process facilitated by the United Nations Integrated Transition Assistance Mission in Sudan (UNITAMS) and aimed at finding a way out of the crisis that has engulfed Sudan since the military takeover on Oct. 25.

Despite being the only process of its kind currently in place, the proposal quickly proved to be highly controversial. So far, the initiative has only been welcomed by the international community and, on paper, by Sudanâ€™s military-led Sovereignty Council. The countryâ€™s main civilian groups, to the contrary, have categorically rejected the offer.

The latterâ€™s stance has again revealed the deep distrust of Sudanâ€™s revolutionary groups toward Perthes and the UN mission, especially following their endorsement of the widely rejected agreement between Hamdok and the coup generals on Nov. 21 and their insistence on rescuing a pre-coup transition that codified the political prevalence of the military. To overcome the lack of credibility of both the broker and the process, many Sudanese argue, mediation mechanisms should break with the approach pursued up to now and put forward one that accounts and adapts to the demands and nature of the street.

â€œThe categorical rejection of the plan has to do with the process and UNITAMS, and by extension the international community,â€ said Kholood Khair, managing partner of the think tank Insight Strategy Partners in Khartoum, to Al-Monitor. â€œThe transition and the [constitutional] document are no longer valid; there is no way to reform that document after the coup. Thereâ€™s no going back, and the process is framed as going back,â€ she added.

At aÂ press conference held on Jan.Â 10, Perthes detailed that the UN plan consists of a two-phase process to support Sudanese stakeholders in building consensus on the way forward for the country. Perthes clarified that UNITAMS will not submit any proposal to solve the crisis, limiting its role to assist the progress of the process. In the press release two days earlier, he stated that all key civilian and military actors would be invited.

During the first phase of the plan, which started on Jan. 10, UNITAMS will arrange initial consultations with Sudanese stakeholders to assess their views on the countryâ€™s most relevant issues, outline priorities and prepare an agenda. The outcome of the initial phase will then feed into the design of further steps. â€œOur role will be limited to providing technical facilities only. There are Sudanese figures who can broker this dialogue, and we will go back after providing the necessary facilities,â€ Perthes said.

Sudanâ€™s military-led Sovereignty Council, acting as a contested head of state and led by coup Gen. Abdel Fattah al-Burhan, welcomed on Jan. 10 the initiative put forward by the UNITAMS but also called for the involvement of the African Union, according to a statement released following one of its periodic meetings. PerthesÂ stated that the military did not object to the UNITAMS plan.

The reaction among political parties and civil society organizations, however, was far more skeptical. Among the only parties that initially seemed open to the UN initiative was the National Umma Party, which stated in aÂ press release that they â€œwelcome the call for dialogue between the components of the political process in the country,â€ albeit noting their â€œfull adherence to the choices of the Sudanese people.â€ The Communist Party categorically rejected the initiative in a lengthy and blunt press release. And the Forces for Freedom and Change, the wide political alliance that had shared power with the military before the takeover, reportedly noted that they would only take part in the talks if the purpose â€œis to resume the democratic transition and remove the coup regime.â€

The reaction considered most important was that of the resistance committees and the Sudanese Professionals Association (SPA), which are â€” especially the former â€” at the forefront of the mobilizations against the military regime. And it was not long in coming. On Jan. 9, the SPA announced its â€œtotal rejectionâ€ to the UN initiative in a statement in which the group considered the process a â€œpush toward normalization with the criminals of the military coup and their fascist authority.â€ It also stated the SPAâ€™s â€œfirm adherenceâ€ to the three noes declared by the revolutionary forces â€” no negotiation, no partnership, no legitimacyÂ â€” and noted that the group will continue to encourage popular mobilizations.

â€œWe tried this way in 2019 with the military; we had the constitutional charter, which was supposed to lead the transitional period. But unfortunately, the military itself undermined this charter, so they are not trusted,â€ Mohaned Elnour, an SPA spokesperson, told Al-Monitor. â€œSecondly, the main job of UNITAMS is to protect the transition process, the democracy and human rights, which we believe they arenâ€™t doing. [The plan] is a trap to divide the revolutionary forces, but this will not happen.”

Hajoj Koka, a member of a resistance committee in Khartoum, defended a similar position to Al-Monitor. â€œWe are adamant about the armyâ€™s need to give up both political and economic power to civilians, and they need to be led by civilians. And for this we donâ€™t want to negotiate and we put the three noes as the standard of how we are moving forward,â€ Koka said. â€œThis is why [Perthesâ€™] initiative is against all we believe, and this is where we started to see [him] as siding with the military, because by saying we have to sit with them, [he] is giving them legitimacy.â€

Where the UNITAMS initiative was almost unanimously welcomed was among the international community, which in Sudan is perceived as increasingly accommodating of the outcome of the military coup, in particular since the Hamdok-Burhan agreement. The Sudan Quad, comprised of Saudi Arabia, the United Arab Emirates â€” both with close ties to the coup generalsÂ â€” the United Kingdom and the United States, said in aÂ joint statement that they â€œstrongly supportâ€ the plan and urged all Sudanese political parties â€œto seize this opportunity.â€

Also openly welcoming of the initiative was Egypt, which is a close ally to Sudanâ€™s military but has issued few public statements since their takeover. In a statement, the Egyptian Ministry of Foreign Affairs said that Cairo â€œsupports the current UN efforts to achieve stability in Sudan.â€ And in a nod to the coup generalsâ€™ road map, it also called on all parties to select a new prime minister and form a government as soon as possible.

â€œThe issue that the UN is facing right now is frankly the same faced by many other countries and institutions that were quick to endorse the Nov. 21 military deal with Prime Minister Hamdok. That really is the biggest impediment, because it was seen as condoning the military coup, as a bit blind to the reality that civilian-military partnership was not working for the civilians. It was really only working for the military,â€ Cameron Hudson, a senior fellow at the Atlantic Councilâ€™s Africa Center, told Al-Monitor. â€œOur words say we are supporting the people on the ground, the pro-democracy movement. But our actions seem to suggest that we are content with the military status quo.”

To get out of the current crossroads, the SPA has asked Perthes to â€œlisten carefullyâ€ to the demands of Sudanâ€™s revolutionary forces, including a complete civilian government.

â€œNow the revolutionary forces are stronger and more organized than during the time of [former Islamist dictator Omar] al-Bashir, and the [military junta] is in a weak position, so I think that any initiative now will give them hope and will extend their time in power,â€ Elnour said. â€œAny initiative or any negotiation with [the military] means a compromise, and we will not accept [one]. They have to be held accountable for their crimes and for undermining the constitution,â€ he added. â€œWe have made it clear: No more partnerships.â€

Khair, the Sudanese analyst, said that â€œwhat the resistance committees and what increasingly the political parties and other parts of the civilian block are pushing for is moving forward to something else, to a new political reality, one that doesnâ€™t have a partnership with the military and has a new political imagination as its objective.â€

â€œSudan needs to break the mold, not reinvent the broken wheel,â€ she added, noting that â€œthe 2019 power-sharing agreement and its transition are deadâ€ and that â€œit has been high time for the [international community] to adjust to this new reality.â€

Koka said that the resistance committees â€œare fighting for a mind shift, not just a political or economic [process]. There has to be a mind shift in how to deal with civilians, and also, when we have social issues, that the way to solve them is not by using force.â€

Hudson noted that a possible alternative for the international community is to focus on an as transparent and inclusive UN proposal as possible. This, he said, should show a higher-level involvement than UNITAMS and should be headed by a senior and credible African leader. â€œThose are the first two things we need to do to build confidence with the street and to demonstrate to the military that this is the one game in town,â€ he said.

Khair, however, also noted that â€œthe issue here is that you have a political impasse and a dialogue process that is launched at a time of extreme state-violence, and I just fail to see how this process will move Sudan forward given the current violence, which wonâ€™t stop [but] through political pressure and, more importantly, consequences.” At the time of publication, Sudanese security forces had killed at least 64 people since the takeover only in Khartoum state, according to the Central Committee of Sudan doctors.