Sunny conditions short-lived as severe storms bear down on Sydney

A severe weather warning has been issued for Sydney and its surrounds after a sweltering Australia Day saw the mercury soar to 31C.

The Bureau of Meteorology (BoM) ﻿issued the alert just before 3:00pm, warning parts of the Blue Mountains, Hawkesbury, Sydney, Gosford, Wyong and Wollondilly, Wingecarribee areas could be hit with severe storms.

The volatile conditions are being driven ﻿by southerly change over southeastern NSW.

“﻿The Bureau of Meteorology warns that, at 2:40 pm, severe thunderstorms were detected on the weather radar near St Marys, Warragamba, the Glen Davis/Newnes district (north of Lithgow) and Cranebrook. These thunderstorms are moving towards the east. They are forecast to affect Colo Heights, Blacktown and Erskine Park by 3:10 pm and Parramatta, Fairfield and Horsley Park by 3:40 pm,” the BoM said.

It comes after thousands of Sydneysiders flocked to the beaches for the public holiday.

It’s been a stormy week for Sydney, as the city on Tuesday was illuminated by a dazzling light show.

“A combination of fork and sheet lightning lit up the skies for what seemed like hours across the entire Sydney basin and locations much further afield,” Weatherzone said.

“As many as 133,000 lightning strikes or thereabouts were recorded within a 100km radius of Blacktown in Sydney’s west.” 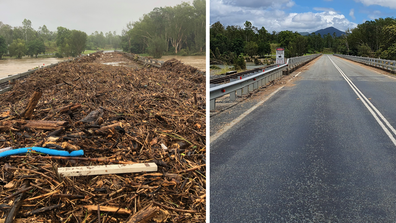