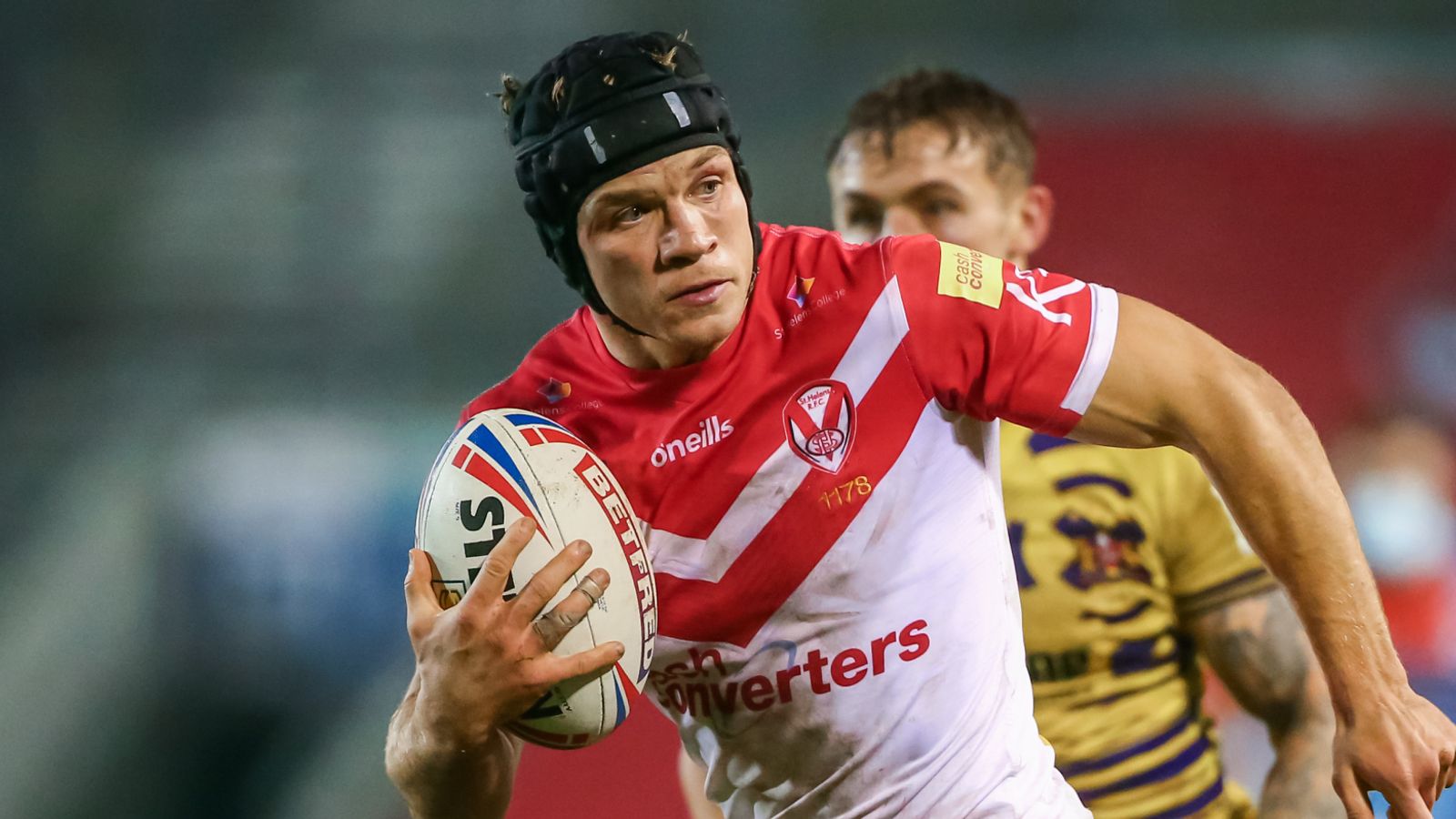 From playing his junior rugby for a Wigan club but going to school in St Helens, Jonny Lomax has always had a different perspective on the rivalry. Watch St Helens take on Wigan Warriors in Friday’s Super League Grand Final live on Sky Sports Arena from 7pm

Every year, at the end of the rugby league season, Jonny Lomax gets together with some old team-mates from his teenage years playing for Orrell St James.

Covid-19 restrictions mean the annual reunion may have to be put on hold in 2020, but if there is some way for them all to get together – socially distanced, of course – then among the perennial talking points will be the old argument about whether Wigan Warriors or St Helens are the superior team.

Unsurprisingly, Lomax is firmly in the Saints camp – and not just because he plays for them. Despite being born in Wigan and playing for one of the town’s amateur clubs in his youth, the England and Great Britain international’s heart has always been with the Red Vee.

He was one of those in his divided home village of Billinge who grew up supporting St Helens and went to the town’s Rainford High Technical College, although Lomax recalls even at Orrell the loyalties were split down the middle.

“It was more 50-50 than you’d have thought even then,” Lomax said. “Obviously, it was a Wigan-based team, so it was a bit of a funny one when it came to town teams.

“Potentially I should have gone to Wigan with my club, but I was at a St Helens school which allowed me to go to St Helens trials instead.

“Going into Saturday morning training sessions after a Friday night game, there was always that bit of banter between the lads, even at a young age, about who was better and a few arguments at the club.

Going into Saturday morning training sessions after a Friday night game, there was always that bit of banter between the lads, even at a young age, aboutÂ who was better and a few arguments at the club.

“It’s been nice to have that perspective and a lot of friends from the amateur team who hopefully I’ll be able to meet up withâ€¦and I’m sure there will be a bit of bickering about the two teams then.”

Friday’s Super League Grand Final between the two old rivals will perhaps settle the bragging rights one way or the other at least until the 2021 season kicks off, but Saints would argue they have held sway for the past 12 months as they enter the clash at the KCOM Stadium as reigning champions.

The 2019 season was a memorable one for the club as they followed up winning the League Leaders’ Shield by an astounding 16-point margin with victory against Salford Red Devils in the Grand Final for the perfect culmination to Justin Holbrook’s two-and-a-half years as head coach.

With Holbrook having returned to Australia to try his hand at reviving the fortunes of NRL side Gold Coast Titans, St Helens turned to another antipodean in the form of ex-Newcastle Knights assistant and Tonga national team boss Kristian Woolf.

Wigan-Saints: The rivalry and the hostility

Adrian Lam, James Roby, Sean O’Loughlin and Kristian Woolf on the rivalry between their clubs ahead of the Grand Final.

Although Wigan claimed the prize for finishing top of the table – decided on points percentage due to the effects of the Covid-19 pandemic on the season – this time around, there is still a chance Saints can make it back-to-back championships in Woolf’s first season in charge with Lomax revealing the subtle but effective changes he has made.

“Kristian has instilled into us what Justin did in that you’ve got to enjoy what you’re doing,” Lomax said. “We all enjoy rugby, that’s why we get involved in it to begin no matter what your position in the game.

“The players all start as fans, so you’ve got to make sure you try to enjoy it. If you have that enjoyment, then it takes a bit of pressure off you when you’re playing.

“He’s come with a tough mentality and that’s something we’ve had to learn. I think it’s something we went away from at time in previous years and we had to get that back.

“He’s instilled into us knowing when to play and when not to play and put a big emphasis on our defence.”

A serious knee injury robbed Lomax of the chance to play in St Helens’ Grand Final win over Wigan in 2014, having been on the losing team when the Warriors triumphed over them at Old Trafford four years earlier.

Having gained a long-sought Grand Final winners ring last year though, the man who was named at stand-off in this year’s Super League Dream Team is eager to add another to his collection and could not think of a better way to do so against Saints’ rivals at the end of a season which will go down in history.

“I was up in the stands [in 2014] and it was quite difficult to watch,” Lomax said. “You want to be involved in the big games, that’s why you play and what you dream of as a young lad.

“To miss out on one, it was difficult, and I was fortunate enough to play in one last year – and be on the verge of playing in another, albeit under different circumstances.