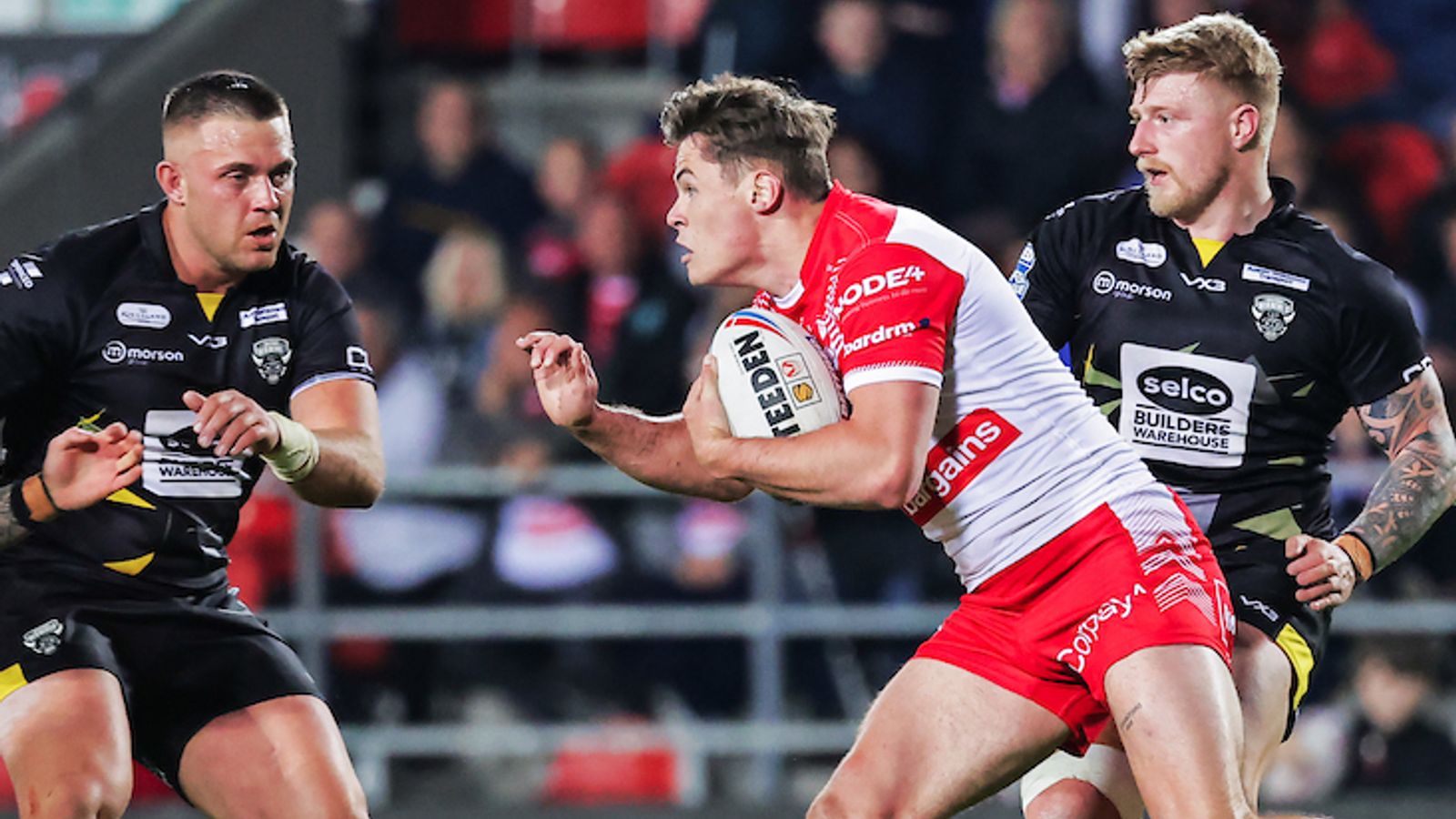 There is no underestimating how big a match this is for both St Helens and Salford as they look to clinch that coveted spot in the Grand Final at Old Trafford.

With St Helens looking to secure a record-breaking fourth Grand Final victory in a row and Salford on a confidence-boosting run that could see them go all the way and secure their first Grand Final win, both sides will be laying it all on the line.

Woolf confident in strong side as Percival and Mata’utia return

St Helens have confirmed they will be without Alex Walmsley for the remainder of the season, with Dan Norman also out of this weekend’s clash with a fractured cheekbone.

However, they are boosted by returns for Mark Percival and Sione Mata’utia in a side head coach Kristian Woolf believes is, despite a number of injuries, their strongest fielded since before Magic Weekend.

“That is what makes players elite being able to do those two things. There is no other player in the competition like him and particularly the impact he can have.

“There is no doubt he is a loss, no doubt whatsoever, but as a team as we have done this year, we have played a number of games without him this year and what it has done has made us stronger as a group.

“I would also say it is the strongest side we have thrown out since well before Magic Weekend so we are really confident in that.”

Both clashes between these sides during the regular season have been interesting ones, each club taking home a win- the Saints taking a close-fought victory and Salford running away with another.

However, for Woolf, it would be useless to read too much into the games that have happened so far when it comes to play-off rugby.

“I don’t think you can look at either of those games too much to be honest,” he added.

Highlights of the Super League match between the Salford Red Devils and St Helens.

Highlights of the Super League match between the Salford Red Devils and St Helens.

“They are confident, they deserve the accolades they have got at the back end of the year and they have played really well ad they deserve to be in the semi-finals there is no doubt there whatsoever.

“We are confident as well and we are coming into this game knowing how to win these sorts of games.

“I think it is the same sort of miss as missing Lewis Dodd since round nine, to be honest.

“We have all got problems and we have all got things we have to overcome and that is what we are going to do and it is up to them to do the same.”

Rowley: We have built a resilient group

After failing a head injury assessment during Salford’s play-off clash with Huddersfield, the Red Devils are confirmed to be without playmaker and Man of Steel nominee Brodie Croft this weekend.

However, the club are riding a wave of confidence and ready to capitalise on it, with head coach Paul Rowley praising his side’s unity in the latter part of the season.

“We’ve kept it as varied as we can in terms of preparation. We’ve built a resilience amongst the group and never been stressed about it, ” said Rowley.

“I feel proud because we’ve got a group that’s all pulling in the same direction. The fulfilment comes from within the team.”

“We’re a small group, but a tight group. Everyone’s found their place and everybody’s opinion is valuable and well received.”

The Salford faithful are estimated to be out in full force at the Totally Wicked Stadium come Saturday with over 3,000 away tickets already sold, giving an indication of just how pivotal this match could be for the club.

Salford’s director of rugby and operations Ian Blease told Sky Sports about the magnitude of the occasion: “It is not just about me at the club it is about everybody, the fans, the city, people were tipping us off to be relegation material but when I saw the work the guys were putting in in pre-season, the coaching, I knew there was no way we were going to be down at the bottom.

“It is just a culmination of the hard work that the players and the coaches have put in so it is great to see, it is great for the club.

“We are back on that roll again hopefully to the Grand Final.

“You just never know what is going to happen at the club from year to year.

“We had some great success in 2019 getting to the Grand Final, Challenge Cup in 2020 and this year I said to the coach at the start of the year, don’t underestimate the work that is going in with the team.

“Things weren’t going quite right early doors but with the effort they were putting in, things started to turn around, the lads got on a roll and confidence is everything in this game so I can’t wait to see what that brings.”

Watch the Super League semi-final between St Helens and Salford live on Sky Sports Arena on Saturday from 12.30pm; kick-off at 1pm.