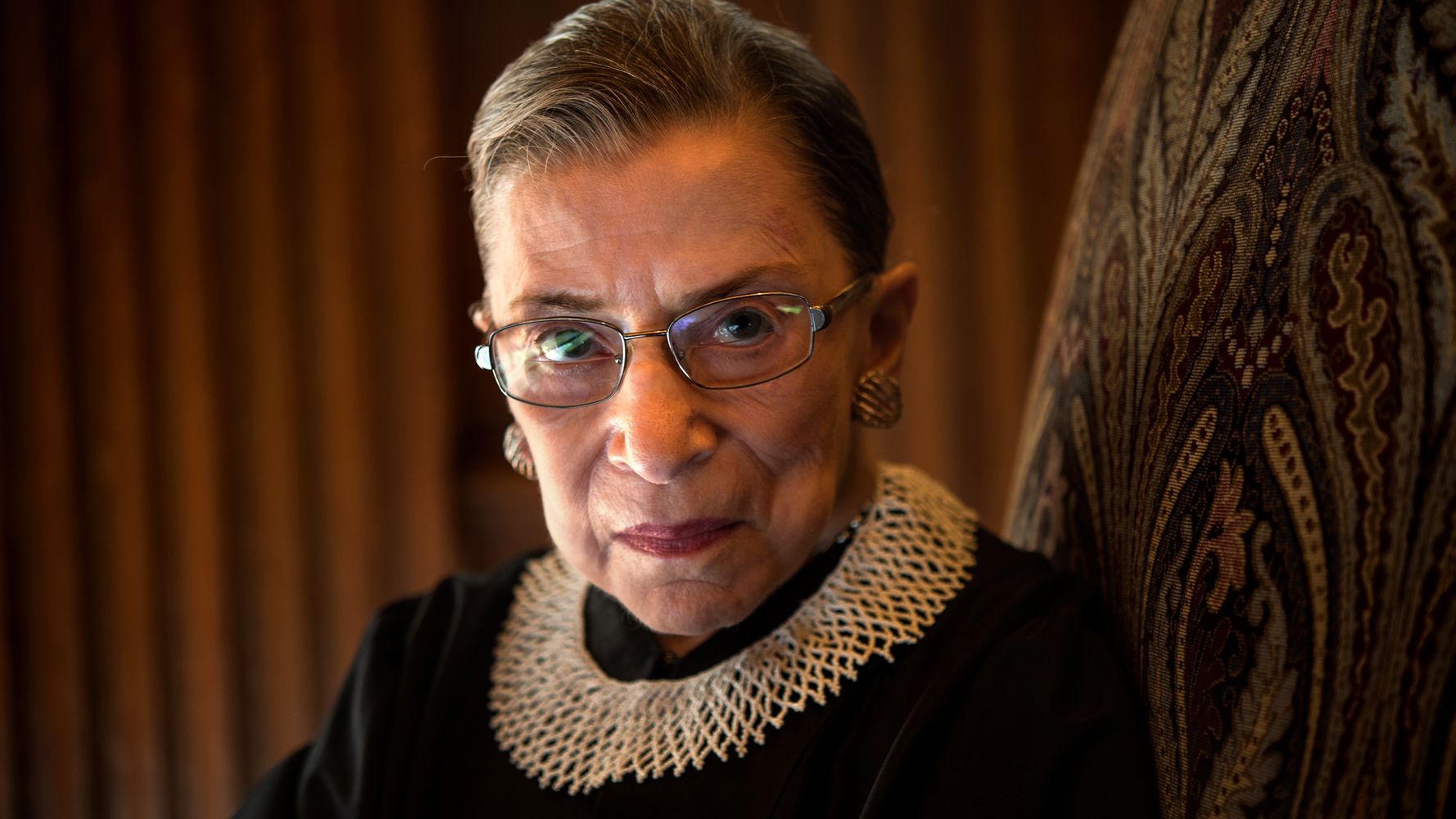 Ruth Bader Ginsburg, the liberal icon who had served on the Supreme Court since 1993 and who crusaded for womenâ€™s rights before that, died on Friday at the age of 87.

Ginsburg died from complications of cancer, according to the Supreme Court. She was surrounded by her family at her home in Washington, D.C.Â

The justice dictated a statement to her granddaughter in the days before her death, NPR reported. Ginsburg said: â€œMy most fervent wish is that I will not be replaced until a new president is installed.â€

Chief Justice John Roberts said in a statement:Â â€œOur nation has lost a justice of historic stature. We at the Supreme Court have lost a cherished colleague. Today we mourn but with confidence that future generations will remember Ruth Bader Ginsburg as we knew her, a tireless and resolute champion of justice.â€

Ginsburg, who was treated for colon cancer in 1999 and for pancreatic cancer in 2011, ignored calls to step down from the Supreme Court as she got older. In May, she was hospitalized for treatment for a gall bladder condition,Â and again in July for a possible infection. In August 2019, she successfully completedÂ three weeks of radiation treatment after a tumor was discovered in her pancreas. The previous December, she had surgery to remove two malignant nodules in her lung, causing her toÂ miss her first oral argumentsÂ since joining the court. She continued working through her recovery, including casting a voteÂ from her hospital bed.

Ginsburg, who was once passed over for a clerkship on the Supreme Court because of her gender, was the second woman to sit on the nationâ€™s highest court after Sandra Day Oâ€™Connor, and the first Jewish woman to do so. President Bill Clinton nominated her to the Supreme Court in 1993 after she had served on the U.S. Court of Appeals for the District of Columbia Circuit since 1980. From 2006 until 2009, she was the only woman on the Supreme Court.

With Ginsburg, who was one of the Supreme Courtâ€™s more liberal justices, now gone, the court is split between three liberal justices and five conservative ones. If President Donald Trump is able to nominate and get another conservative justice confirmed, that would cement conservativesâ€™ hold on the nationâ€™s most powerful court, likely for years to come.Â Â

When conservative Justice Antonin Scalia â€” a close friend of Ginsburgâ€™s â€” died in February 2016, Republicans in the Senate blocked former President Barack Obamaâ€™s nominee, Judge Merrick Garland of the U.S. Court of Appeals for the District of Columbia Circuit, saying the president shouldnâ€™t make the selection in a presidential election year.Â

Now, just over six weeks before the 2020 election, Senate Majority Leader Mitch McConnell (R-Ky.) confirmedÂ on Friday: â€œPresident Trumpâ€™s nominee will receive a vote on the floor of the United States Senate.â€

Ginsburgâ€™s opinions for the court were influential, regardless of whether she was writing for the majority or dissenting. In the 2007 case Lilly Ledbetter v. Goodyear Tire & Rubber Co., for example, the Supreme Court ruled 5-4 that a woman could not sue her former employer for paying her male counterparts more than her because she had not filed suit claiming discrimination within a 180-day period required by law. In an opinion joined by three other justices, GinsburgÂ dissented vociferously, arguing that such a requirement was nonsensical because it might take a female employee longer than 180 days to find out that she was being paid less than her male counterparts. In her dissent, she directly appealed to Congress to change the law.

In 2009, Congress did just that and passed the Lilly Ledbetter Fair Pay Act, which President Barack Obama signed into law that year. The law said that after each new paycheck, employees had a new 180-day period to file for discrimination.Â

Ginsburg wrote forcefully on a number of cases that directly impacted women. In 1996, she wrote the majority opinion in a caseÂ in which the court ruled that the Virginia Military Instituteâ€™s policy of only admitting men violated the equal protection clause of the Constitution. She also wrote powerful dissents in Gonzales v. Carhart, in which the court upheld a federal ban on so-called â€œpartial-birthâ€ abortions, and Burwell v. Hobby Lobby Stores, which allowed closely held corporations to refuse to provide certain contraceptive coverage to employees for religious reasons.

â€œWomen, it is now acknowledged, have the talent, capacity, and right â€˜to participate equally in the economic and social life of the Nation. Their ability to realize their full potential, the Court recognized, is intimately connected to their ability to control their reproductive lives,â€™â€ Ginsburg wrote in her dissent in Gonzales v. Carhart. â€œThus, legal challenges to undue restrictions on abortion procedures do not seek to vindicate some generalized notion of privacy; rather, they center on a womanâ€™s autonomy to determine her lifeâ€™s course, and thus to enjoy equal citizenship stature.â€

Even though she was small in stature, her toughness and hard workout routine, combined with her fierce rhetoric, earned her the nicknameÂ â€œNotorious R.B.G.â€Â â€• something in which she seemed to take great pleasure.

Born Ruth Joan Bader in Brooklyn, New York, in 1933, Ginsburg earned her B.A. from Cornell University, where she met her future husband, Martin Ginsburg. The two married in 1954, the same year Ginsburg graduated from college. Ginsburg then enrolled at Harvard Law School, where she was one of nine women in a class of 500 and cared for her daughter while completing her coursework. Following two years at Harvard, Ginsburg finished her degree at Columbia University after Martin received a job in New York. Even though she had completed most of her coursework at Harvard, the law school dean there reportedly refusedÂ to grant her a degree, so she earned her law degree from Columbia, where sheÂ tied for valedictorian. Harvard eventuallyÂ gave Ginsburg an honorary degree in 2011.

Despite her qualifications, Ginsburg was unable to find work after she graduated from law school in 1959. A Harvard dean even sentÂ a letter to Supreme Court Justice Felix Frankfurter recommending Ginsburg as a law clerk, but the justice replied that while he was impressed by Ginsburg, he simply was not ready to hire a woman.

Ginsburg eventually secured a clerkship with a federal judge in New York and went on to teach at Rutgers Law School before becoming the first female tenured professorÂ at Columbia in 1972. That same year, she founded the ACLUâ€™s Womenâ€™s Rights Project, and from 1972 to 1980 she served as general counsel for the ACLU, a role in which she pushed courts to strike down laws that discriminated on the basis of sex.

In the early 1970s, Ginsburg authored the ACLU legal brief for a Supreme Court case on behalf of an Idaho woman claiming that a state law that gave men preference in becoming the administrator of an estate after a family member died was unconstitutional. Ginsburg argued that the law violated the equal protection clause of the 14th Amendment, which entitles all persons to â€œequal protectionâ€ under all laws, because it treated men and women differently. The Supreme Court agreed with Ginsburg in the case, called Reed v. Reed, and ruled in favor of the woman, 7-0. It was the first timeÂ the court had applied the 14th Amendment to determine discrimination on the basis of sex.

As a litigator, Ginsburg took an incremental approach before the Supreme Court. She carefully chose cases and plaintiffs toward which she thought the justices â€• all men â€• were likely to be sympathetic. In one case, for example, Ginsburg successfully convinced the Supreme Court that an Oklahoma law that allowed women to buy alcohol at age 18 but forced men to wait until they were 21 was unconstitutional. In the opinion in the case, called Craig v. Boren, the Court established an â€œintermediate scrutinyâ€Â standard for gender discrimination laws, meaning that the state had to prove that the law furthered an â€œimportant government interestâ€ in a way that was â€œsubstantially related to that interest.â€

When he nominated her to the Supreme Court in 1993, Clinton noted the profound legacy that Ginsburg brought to the bench.

â€œThroughout her life she has repeatedly stood for the individual, the person less well-off, the outsider in society, and has given those people greater hope by telling them that they have a place in our legal system, by giving them a sense that the Constitution and the laws protect all the American people, not simply the powerful,â€ Clinton said.

While she was a crusader for women in front of the Supreme Court, Ginsburg was critical of the courtâ€™s decision in Roe v. Wade, the landmark 1973 decision that struck down a Texas law prohibiting abortion and established a constitutional right to an abortion. While Ginsburg supported a womanâ€™s right to choose, she saidÂ the court in Roe went â€œtoo far, too fastâ€ and lent fuel to the anti-abortion movement. Instead of ruling broadly in Roe, Ginsburg said, the Supreme Court should have taken a narrower approach, striking down the Texas law in question and allowing states to build on political momentum and pass laws that protected access to abortions.

Despite her status as one of the courtâ€™s more liberal justices, one of her best friends on the Supreme Court was her ideological opposite: the late Justice Antonin Scalia. While the two could forcefully disagree with one another in opinions that they authored for the Supreme Court, they shared a mutual love of opera, and even had an opera written about them.

Ginsburgâ€™s husband of 56 years, Martin, diedÂ in 2010. She is survived by two children, four grandchildren, two step-grandchildren and one great-grandchild.