Supreme Court Will Hear Challenge to Affirmative Action at Harvard and U.N.C. 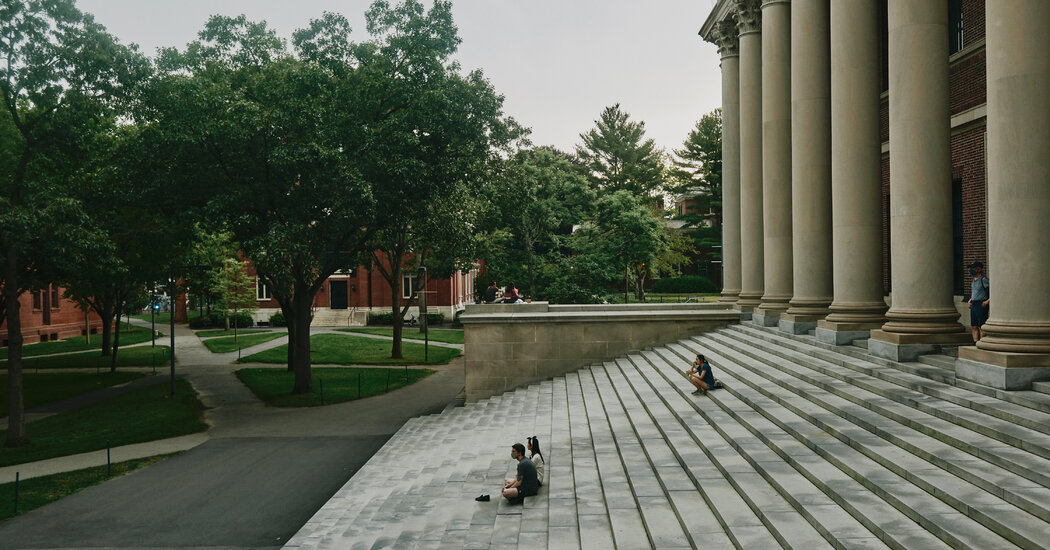 WASHINGTON â€” The Supreme Court agreed on Monday to decide whether race-conscious admissions programs at Harvard and the University of North Carolina are lawful, putting the fate of affirmative action in higher education at risk.

The court has repeatedly upheld similar programs, most recently in 2016. But recent changes in the courtâ€™s membership have made it more conservative, and the challenged programs are almost certain to meet skepticism.

The case against Harvard accused it of discriminating against Asian American students by using a subjective standard to gauge traits like likability, courage and kindness and by effectively creating a ceiling for them in admissions.

Lawyers for Harvard said that the challengers had relied on a flawed statistical analysis and denied that the university discriminated against Asian American applicants. More generally, they said that race-conscious admissions policies are lawful.

â€œUnder established precedent, to achieve the educational benefits that flow from student-body diversity,â€ they wrote in a brief urging the justices to deny review, â€œuniversities may consider race as one factor among many in a full, individualized evaluation of each applicantâ€™s background, experiences and potential contributions to campus life.â€

In the North Carolina case, the plaintiffs made more familiar arguments, saying the university discriminated against white and Asian applicants by giving preference to Black, Hispanic and Native American ones. The university responded that its admissions policies fostered educational diversity and were lawful under longstanding Supreme Court precedents.

Both cases were brought by Students for Fair Admissions, a group founded by Edward Blum, a legal entrepreneur who has organized many lawsuits challenging race-conscious admissions policies and voting rights laws, several of which have reached the Supreme Court.

In the recent suits, the universities both won in federal trial courts, and the decision in Harvardâ€™s favor was affirmed by a federal appeals court.

The Supreme Courtâ€™s decision to hear both cases may have been influenced by the differing legal regimes that apply to the two schools. Harvard, a private entity, must comply with a federal statute that bans race discrimination as a condition of receiving federal money; the University of North Carolina, which is public, must also satisfy the Constitutionâ€™s equal protection clause.

The Supreme Courtâ€™s 2016 decision upheld an admissions program at the University of Texas at Austin, holding that officials there could continue to consider race as a factor in ensuring a diverse student body. The vote was 4 to 3. (Justice Antonin Scalia had died a few months before, and Justice Elena Kagan was recused.)

Writing for the majority, Justice Anthony M. Kennedy said that courts must give universities substantial but not total leeway in devising their admissions programs.

â€œA university is in large part defined by those intangible â€˜qualities which are incapable of objective measurement but which make for greatness,â€™â€ he wrote, quoting a landmark desegregation case from 1950. â€œConsiderable deference is owed to a university in defining those intangible characteristics, like student body diversity, that are central to its identity and educational mission.â€

â€œBut still,â€ Justice Kennedy added, â€œit remains an enduring challenge to our nationâ€™s education system to reconcile the pursuit of diversity with the constitutional promise of equal treatment and dignity.â€

A new challenge. The U.S. SupremeÂ Court has repeatedly upheld race-conscious admissions programs through the decades, but the courtâ€™s new conservative supermajority has agreed to hear two casesÂ that put the fate of affirmative action in higher education into question. Hereâ€™s what to know:

The Harvard case. The university is accused of setting a quota on Asian American studentsÂ and holding them to a higher standard than applicants of other races. This is different from the strategy used in past challenges, which accused universities of discriminating against white applicants.

How have the courts ruled so far? Both schools have won in federal trial courts, and the decision in Harvardâ€™s favor was affirmed by a federal appeals court. But the group that sued the universities targeted them as part of a long-term strategyÂ to get the cases to the Supreme Court.

What might the Supreme Court do? A 2016 decisionÂ by the court upheld a race-conscious admissions program at the University of Texas at Austin. But recent changes in the courtâ€™s membership have made it more conservative, and the challenged programs are almost certain to meet skepticism.

He was joined by Justices Ruth Bader Ginsburg, Stephen G. Breyer and Sonia Sotomayor. In an interview not long after the Texas case was decided, Justice Ginsburg said it would endure.

â€œIf Justice Kagan had been there, it would have been 5 to 3,â€ she said. â€œThatâ€™s about as solid as you can get.â€

After a long blockade of President Barack Obamaâ€™s nominee by Senate Republicans, Justice Scalia was replaced by Justice Neil M. Gorsuch. All three of the new justices were appointed by President Donald J. Trump.

The Texas decision essentially reaffirmed Grutter v. Bollinger, a 2003 decision in which the Supreme Court endorsed holistic admissions programs, saying it was permissible to consider race as one factor among many to achieve educational diversity. Writing for the majority in that case, Justice Sandra Day Oâ€™Connor said she expected that â€œ25 years from now,â€ the â€œuse of racial preferences will no longer be necessary.â€

The court is now poised to act well before Justice Oâ€™Connorâ€™s deadline. If it sides with the challengers and does away with racial preferences in higher education, American campuses could quickly look quite different. Such a ruling would, all concerned agree, reduce the number of Black and Latino students at nearly every selective college and graduate school, with more Asian American and white students gaining admission instead.