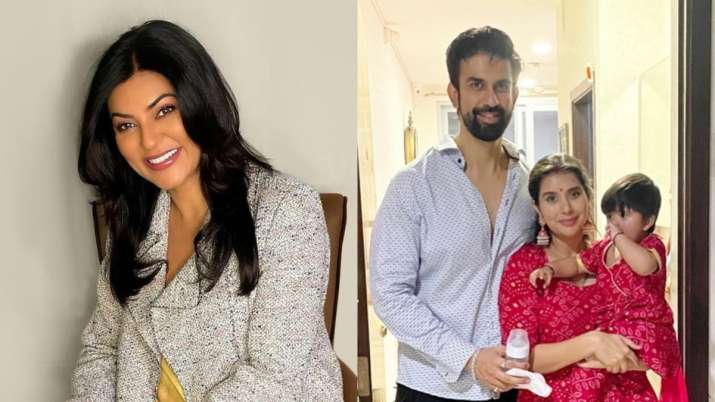 Sushmita Sen has been making the headlines relating to her personal life lately. The actress recently caused a stir on the internet after news broke of her relationship with businessman Lalit Modi. Her equation with her brother, Rajeev Sen, was also widely discussed. Recently, the actress took to Instagram and congratulated her brother Rajeev Sen and his wife Charu Asopa for giving their marriage a second chance.

On Thursday, TV actress Charu Asopa took everyone by surprise as she shared some adorable family pictures, announcing that they are reconsidering their split and calling off their divorce for good. Sharing the post, Charu wrote, “Marriages are made in heaven but it is left to us to make it work. Yes we went ahead and announced that we are ending our marriage and we realised that we had reached the dead end and nothing beyond. Divorce was an option we were considering and we wont deny that..Happy to announce that we have decided to keep our Marriage for good , We both are blessed with a beautiful daughter ziana & we wish to give her the very best as parents . Her upbringing & happiness is our number one priority.. We want to thank all our fans for always supporting us as a couple & never giving up on us .. Thank you everyone for blessing Ziana with so much love.”

As soon as Charu shared the good news, Sushmita Sen took to the comment section and wrote. “I am soooooo happy for all 3 of you!!! Dugga Dugga Shona!!!”


Fans also rushed to the comment section to wish them lifelong togetherness.

For the unversed, Rajeev Sen and Charu Asopa tied the knot in June 2019 in Goa. Sometime ago, Charu sparked her divorce rumours with Rajeev when she deleted all her pictures with him from social media. The couple was seen taking indirect digs at each other on social media and also revealed various things in the media about their impending divorce.

However, the couple is now back together, putting an end to the marital conflict, and they will reportedly be seen in Bigg Boss 16 as a pair.

Anurag Kashyap’s daughter Aaliyah on struggles with being in a toxic relationship, says ‘prioritise yourself’

Dwayne Johnson brings his own food to restaurants for THIS reason. Find out.