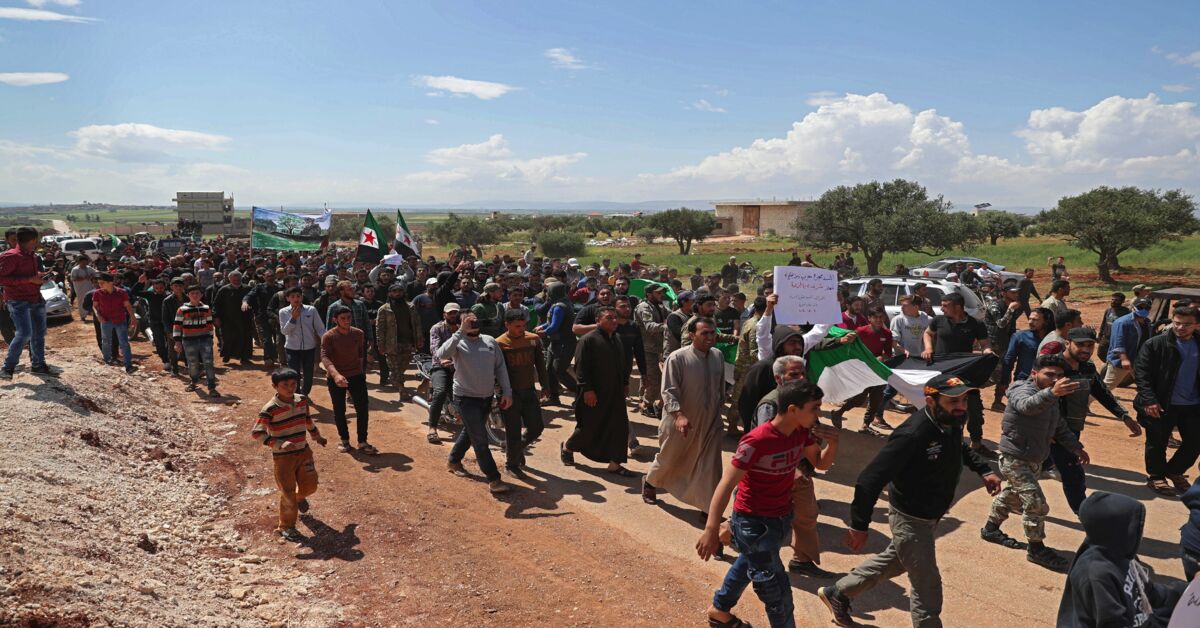 ALEPPO, Syria â€” The Syrian government is closely watching how the military force of Hayat Tahrir al-Sham (HTS) is developing in Idlib governorate and is following up with concern on its supposed success in imposing its hegemony on Idlib and in promoting the work of the institutions that provide services in the area. The Syrian government continues to reinforce that HTS is a terrorist organization that must be fought and eliminated.

In 2018, HTS was designated by the United States as a terrorist organization, with the UN Security Council including it as a sanctioned entity linked to the Islamic State, alâ€‘Qaeda, and associated individuals and groups.

In late 2021, government forces waged a new war against HTS (previously known as Jabhat al-Nusra), broadcasting confessions made by detainees affiliated with the Qasioun Brigades, which the government accused of being part of HTS and behind a series of blasts that have struck Damascus and its countryside over the past few years.

According to the government, a group affiliated with HTS claimed responsibility for a series of bombings in several parts of Damascus and its countryside in 2019, 2020 and 2021. On Dec. 25, the Syrian News Channel conducted interviews with members of the group who said they had received instructions from HTSâ€™s leaders in Idlib.

In a video of the interviews released by the government, members of the group confess. These people are Tariq Zaki al-Saadi, Muhammad Ayman Omar Erslan, Youssef Muhammad al-Khamis, Abdallah Muhammad Arfan al-Masalkhi, Mahmoud Nazhat Nazhat and Omar Fahd Nazhat. All of themÂ mention HTS leaders in Idlib Abu Saleh and Muhammad al-Saleh (aka Abu Amin). According to the group members, the leaders gave them instructions to carry out the attacks.Â The attacks, which the group admitted conducting, include targeting government-affiliated security officials, people collaborating with the government, and members of the government forces and its auxiliary forces.

The Qasioun Brigades announced themselves for the first time in April 2019 in a statement on Telegram in which they claimed responsibility for killing two members of the Republican Guard in the town of Wadi Ayn Tarma, which connects Damascus to eastern Ghouta. On Telegram, the brigade posts about its various operations in the capital and its countryside, the latest of which was blowing up a bus carrying employees of the governmentâ€™s Military Housing Corporation on Oct. 20. While it is still unknown with whom the brigades are affiliated, HTS has refrained from pointing to any ties with them.

An HTS official who declined to be named told Al-Monitor, â€œWe have become accustomed to the false claims that the Assad regime media have been making for 10 years. The recent accusations regarding the Qasioun Brigades did not surprise us. Many Syrian activists and journalists appeared in the regimeâ€™s media where they made fake confessions and testimonies they were forced to make in order to serve the regimeâ€™s narrative.â€

He added, â€œI believe that the Qasioun Brigades are a form of local resistance in Damascus, and one can say that they consist of a network of former revolutionaries and opponents who chose to stay there rather than be part of the displacement waves from the southern parts of Syria in the past years. The regime is trying to use this card, claiming that they are affiliated with HTS and received funds from the latter. These are false claims.â€

By broadcasting these confessions, the government wants to say that it still has an iron security grip in areas under its control, in a bid to reassure its supporters. At the same time, it levels accusations against HTS in a bid to enlarge a popular base hostile to the latter and to stress the need to eliminate it after the battles in the north were halted in early 2020 through a Russian-Turkish understanding.

In parallel, HTS continues to strengthen its military capabilities and recruit more people within its ranks. The increased military power is seemingly reflecting HTSâ€™s desire to preserve and defend its areas against the Syrian government. In late December, it launched a recruitment campaign to bring new elements and fighters into its ranks.

The campaign involves the organization of several courses and the teaching of various fighting styles, in addition to bringing new people to the ranks of the Red League, namely its special forces that receive specific training and take part in complex military operations. Its members are called â€œinghimasiyeen,â€ which means those who carry out specific suicide operations in the depth of their opponentsâ€™ areas.

The recruitment campaign included attending the armored, sniper and artillery forces courses. HTS publicized its campaign byÂ hanging banners in several cities and areas under its control in Idlib governorate, and it set up eight recruitment divisions toÂ receive new volunteers who must meet predetermined conditions.

The HTS Military Academy announced on Oct. 11 the graduation of the group’s commanders. Earlier it announced the completion of several training courses such as the Red Leagues course, the level-up course, the field commanders course and theÂ special forces course. It also promoted the rehabilitation and training of its fighters to develop their combat skills.

In a related vein, Ali Keda, head of the HTS-affiliated Salvation Government,Â visited in December the Military Academy in Idlib, where he met with a large number of officers who had defected from the government and who were newly appointed at the academy that HTS established in the first quarter of 2021. Keda also inspected the first course of student officers at the academy.

Speaking on condition of anonymity, a jihadi source opposing HTS told Al-Monitor, â€œIt seems that the visit of the head of the Salvation Government to the academy could be the first step on the path toward announcing the establishment of the Ministry of Defense. These developments seem to worry the regime, which wants to attack HTS in Idlib as soon as possible and fears that it could take too long.”