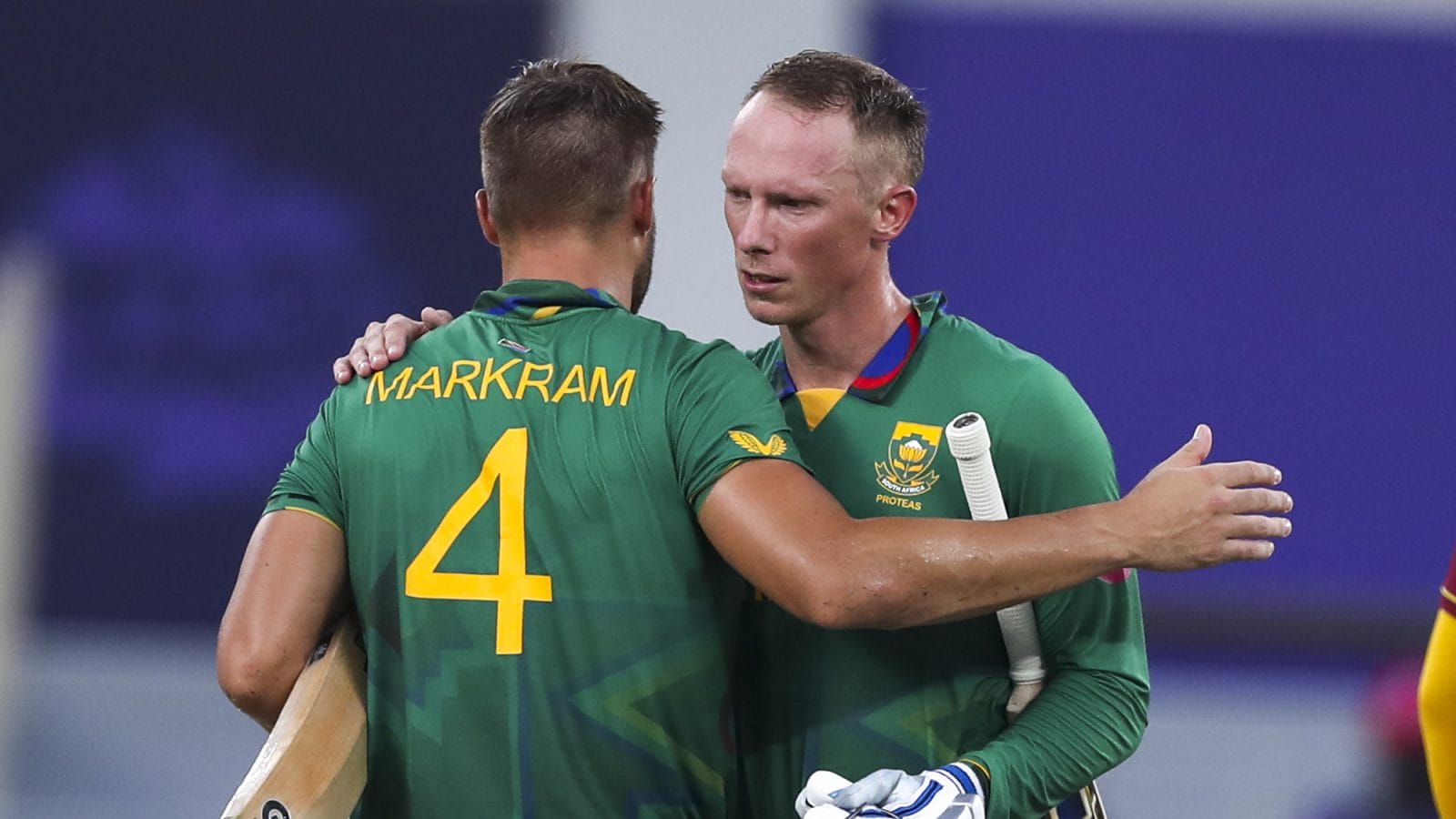 Dubai: Aiden Markram struck a whirlwind unbeaten fifty as South Africa produced an all-round effort to bounce back strongly from their opening defeat and beat West Indies by eight wickets to secure their first win in the Super 12 stage of the ICC T20 World Cup here on Tuesday. Both South Africa and West Indies started their Super 12 campaign on a losing note. While the Proteas were handed a five-wicket defeat by Australia, West Indies sank to six-wicket loss against England.

South Africa will next play Sri Lanka in their third Group 1 match on October 30, while West Indies will take on Bangladesh a day earlier. South Africa first weathered Evin Lewisâ€™ (56) initial onslaught to restrict West Indies to 143 for eight and then rode on solid batting displays from Markram (51 not out off 26), Rassie van der Dussen (43 not out off 51) and Reeza Hendricks (39) to comfortably chase down the target with 10 balls to spare.

Contrary to the end result, South Africa did not have the best of starts to their chase losing skipper Temba Bavuma early to a run out. But Hendricks, who replaced Quinton de Kock dropped for for not taking knee against racism, and van der Dussen then stabilised the innings with a 57-run second wicket stand.

Markram decorated his innings with two fours and four sixes. Earlier, Lewis smashed a quickfire half-century before West Indies lost the plot to manage the modest score. Lewis and Lendl Simmons (16) got West Indies off to a flier. The duo put on 73 runs off 63 balls for the opening stand before West Indies lost wickets at regular intervals. Lewis did the bulk of the scoring in the partnership. He showed his aggressive intent from the beginning, hitting Kagiso Rabada for a boundary over backward point and then lofted the bowler straight over his head in the next ball.

Next it was Aiden Markramâ€™s turn to face Lewisâ€™ wrath as the batter struck two sixes and a four in successive balls to garner 18 runs in the fifth over. Lewis then smashed Anrich Nortje over mid-off but a ball later the bowler induced a thin edge from Simmons which wicket-keeper Henrich Klaasen failed to hold.

Lewis was in ominous form as he didnâ€™t spare a single South Africa bowler. He brought up his fifty in style, slog sweeping Tabraiz Shamsi over deep square-leg to reach landmark in just 32 balls. Lewis continued in the same vein after his fifty and clobbered Keshav Maharaj for a six but finally perished a ball later in search of one too many, holed out to Rabada at deep midwicket.

He struck three fours and six sixes during his 35-ball knock. Two more quick wickets, somewhat, put a brake on West Indiesâ€™ charge after the brilliant start given by Lewis.

But Simmons stay was struggle as his 35-ball innings was the joint-longest in terms of balls without a boundary in menâ€™s T20 World Cup. Nicholas Pooranâ€™S (12 off 7) stay was shortlived as he became Maharajâ€™s second victim, caught by David Miller and then Simmons was castled by Rabada in the next over.

Shamsi was taken to task by West Indies skipper Kieron Pollard and Chris Gayle, hitting the left-arm spinner for a six each in the 16th over. Gayleâ€™s run-a-ball 12 knock was cut short by Dwaine Pretorius before Andre Russell was cleaned up by Nortje in the next over. Shimron Hetmyer was run out a ball later to compound the West Indies problems.

Pollard made 26 off 20 balls but failed to push up the scoring towards the end.

Get all the IPL news and Cricket Score here