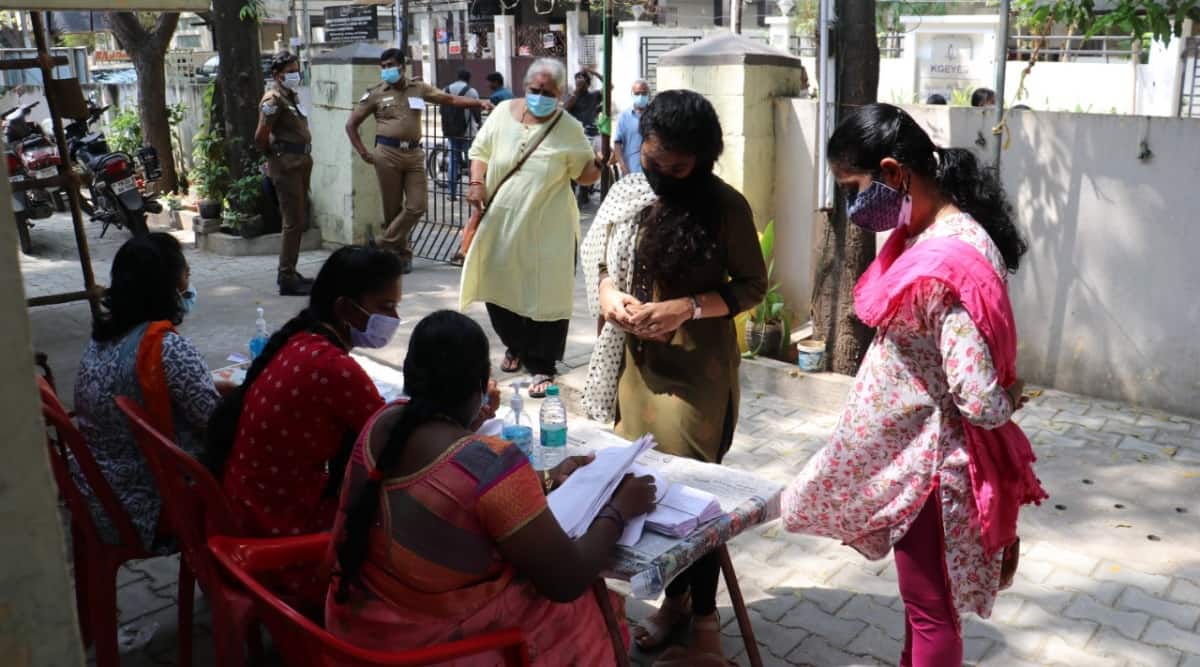 The single phase polling on Saturday in Tamil Nadu to elect over 12,500 ward members in 640 plus urban local bodies was peaceful by and large, officials said. The voter turnout was tepid in several regions through the day and an announcement on overall polling percentage is expected from the state election commission.

The counting of votes would commence on February 22 in 268 centres. The urban civic polls were last held in Tamil Nadu in 2011 when the AIADMK was in power.

Stray incidents like a BJP manâ€™s objection to a Hijab clad woman voter in a polling station in Madurai, altercations between groups and ruckus between DMK and AIADMK workers in some areas led to anxiety for a while.

There were also complaints about malfunctioning of EVMs in some polling stations besides multiple allegations of distribution of money against one and another. It includes accusations against both the ruling DMK in some cases and the main opposition AIADMK in respect of others. The BJP also alleged distribution of cash by the DMK across the state.

The BJP man involved in the Hijab row was taken away subsequently by police and registered a case against him. Tamil Nadu State Election Commissioner V Palanikumar said India is a secular country and a report has been sought from district poll authorities on the matter.

Peopleâ€™s support to his party in the urban polls would be more than what was seen in last yearâ€™s Assembly election, he said.

Panneerselvam, recalling welfare schemes during his party-led regime expressed confidence that people would extent their full support to the AIADMK in the todayâ€™s civic polls.

The opposition party, in a complaint to the Tamil Nadu State Election Commission (TNSEC), alleged violence by the DMK in some booths coming under the Chennai Corporation limits. Party spokesperson and joint secretary of its advocates wing, RM Babu Murugavel, in the complaint, sought action from the TNSEC and demanded re-polling in some of the wards.

Earlier, voting began in urban regions spread across 38 districts at 7 AM and ended at 6 PM. While the last one hour of polling was allocated to those affected by coronavirus, people who arrived at polling stations till 5 PM were allowed to vote. EVMs were moved to counting centres amid tight security.

Till 3 PM, the aggregate polling percentage was 47.18 in the state.

A variety of people like the first time voters, the differently abled and nonagenarians eagerly lined up to cast their votes in a slew of polling stations across the state.

A private bus driver while on a routine trip in Dharmapuri District requested permission from passengers to give him â€™10 minutesâ€™, parked the vehicle on road side and resumed driving after voting at a booth.

Reportedly some arrived at their home towns in Tamil Nadu from far away locations including a woman from Mumbai and a man from abroad to cast their votes in civic polls.

While authorities said visually impaired were helped to vote, a visually challenged man said â€˜Braille sheetâ€™ was not provided to enable them make an independent choice. A â€˜gloveâ€™ like cover was provided to the electorate to cover their hand before touching the EVM as part of norms to prevent COVID-19.

In accordance with an election related rule, anti-corruption NGO â€˜Arappor Iyakkamâ€™ convener Jayaram Venkatesan made an entry in a register stating his unwillingness to vote since there was no NOTA option in civic polls.

Workers of many parties set up temporary â€˜help desksâ€™ on roadsides to help people identify their booths and serial number on electoral rolls. Polling and police personnel took the differently abled people on wheel chairs inside the polling stations and helped them cast their votes. Also, ramps were made available in some locations.

As many as 57,778 candidates are in the fray for 12,607 posts of ward members in 648 urban local bodies and in total the count of eligible voters is over 2.75 crore. A variation in the number of wards is likely in view of factors like death of some candidates.

Polls were announced last month by the TN State Election Commission for a total of 12,838 ward member posts in 649 urban civic bodies. The 649 urban local bodies are 21 municipal corporations, 138 municipalities and 490 town panchayats.

Subsequently, polls for all the 12 wards in Kadambur town panchayat in Thoothukudi district were cancelled for violations. For a town panchayat ward (Kanadukathan) in Sivaganga district, no nominations were filed. In total 218 candidates were elected unopposed.