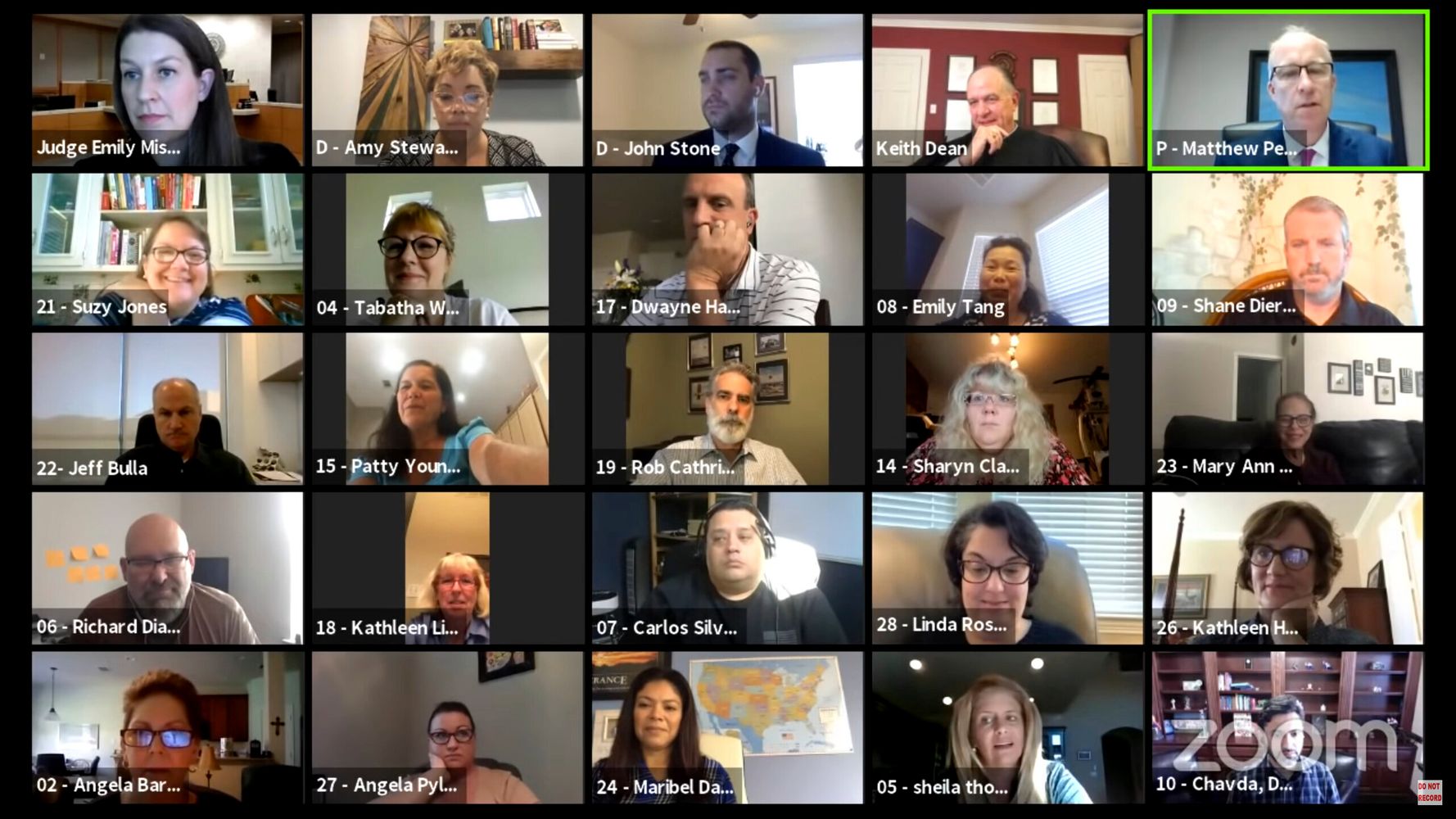 DALLAS (AP) â€” The potential jurors popped onto the screen one by one. They confirmed their names and told the judge how they were connecting to the court: on laptops, tablets and iPhones.

There were some wireless issues and camera problems, but eventually 26 Texans in separate boxes raised their hands for the judge and together swore the jurorâ€™s oath, beginning the experiment of conducting a civil jury trial entirely over Zoom.

The coronavirus pandemic has crippled courts nationwide, putting many cases on indefinite hold and leaving judges trying to manage some hearings via videoconferencing. The delays have kept some defendants in jail longer, exposing them to possible outbreaks. And the virus even upended how the Supreme Court operates, with the justices hearing oral arguments by phone for the first time in the courtâ€™s history.

The test jury-trial-by-video that was held in suburban Dallas this week could reveal a possible path forward in which jurors are kept safely distanced while cases are allowed to proceed until the coronavirus threat has receded enough to resume some semblance of normal life.

It also raises complex questions about security, a personâ€™s right to a fair trial and whether virtual deliberation might prevent 12 people from forming the bonds needed to hash out justice.

â€œNo one is saying tomorrow weâ€™re going to start trying serious felonies over Zoom,â€ said District Judge Emily Miskel, who coordinated technology for the trial. â€œBut I think there are many civil trials where parties might agree that this is a good way to resolve it given the uncertainty of when youâ€™re ever going to get an in-person civil jury trial.â€

The Collin County court held the so-called summary trial â€” a one-day civil proceeding with a non-binding verdict â€” on Monday as an experiment in restarting parts of the justice system that ground to a halt because of the coronavirus. It was over a disputed insurance claim that was originally set to be heard in-person in March. According to the National Center for State Courts, which has tracked court functions during the pandemic, itâ€™s the first remote jury trial ever in the United States.

Those involved seemed pleased with the process.

Jury selection was streamed live on YouTube, but most of the rest was private because summary trials are confidential civil proceedings meant to give the parties the option of settling before an actual trial.

During jury selection, lawyers for both sides asked people on the call to raise their hands in response to questions about potential bias. When a hand popped onto the screen, the lawyers would ask follow-ups or note the jurorâ€™s number.

Matthew Pearson, a San Antonio lawyer for the plaintiff, said the comfort of their homes seemed to make the jurors more responsive to questions. They were attentive as he presented evidence by sharing his computer screen over Zoom, Pearson said, and his firm saved money because it didnâ€™t have to fly an expert witness in from Minneapolis.

â€œOverall, it was a better experience than I was expecting,â€ he said.

The jurors were broken into two groups of six and put in separate virtual rooms where they could talk privately and look at evidence in Dropbox folders. They ultimately returned two verdicts meant to give the parties more information to assess whether to go to trial.

At one point, things were delayed a few minutes when a juror whoâ€™d stepped away to make a phone call during a break couldnâ€™t hear the judge calling him back to his computer. The same type of thing happens in the courthouse, Keith Dean, the retired judge who presided over the trial, told the others.

Miskel, the other judge, joined the deliberation â€œroomsâ€ a couple times to help jurors access evidence, which she said would normally cause attorneys to â€œfreak out.â€ Normally, jurors send notes asking the judge for help and a member of the staff goes into the jury room with pieces of evidence.

But lawyers worry that virtual deliberation cuts out the casual interaction among jurors that some see as essential to building group trust. And defense attorneys are especially skeptical of e-court for criminal cases, where they already struggle to speak privately with their clients during routine hearings held remotely.

â€œIt would just be too difficult, too many constitutional hurdles to clear for a defendant to be brought to a virtual trial,â€ said Randy Gioia of Massachusettsâ€™ public defender agency. â€œThere is no substitute for an in-person, face-to-face three dimensional hearing with a judge.â€

Security is a concern too. As tens of millions of people have turned to video conferencing to stay connected during the pandemic, hackers have derailed many calls with threats, bigoted comments and pornographic images.

If more courts turn to video trials, ensuring people with poor or no wireless could serve as jurors would also be a challenge. Rare cases that require juries to be sequestered might have to take place in-person.

Even when cases do return to the courthouse, the virus may have changed things. Cross examinations will be different if attorneys and witnesses are wearing masks. And Miskel suggested courts might blend in-person and online â€” doing trials over video but bringing jurors into to court to deliberate.

Dean reminded jurors at the start of the proceedings that the online setting made their duties no less important.