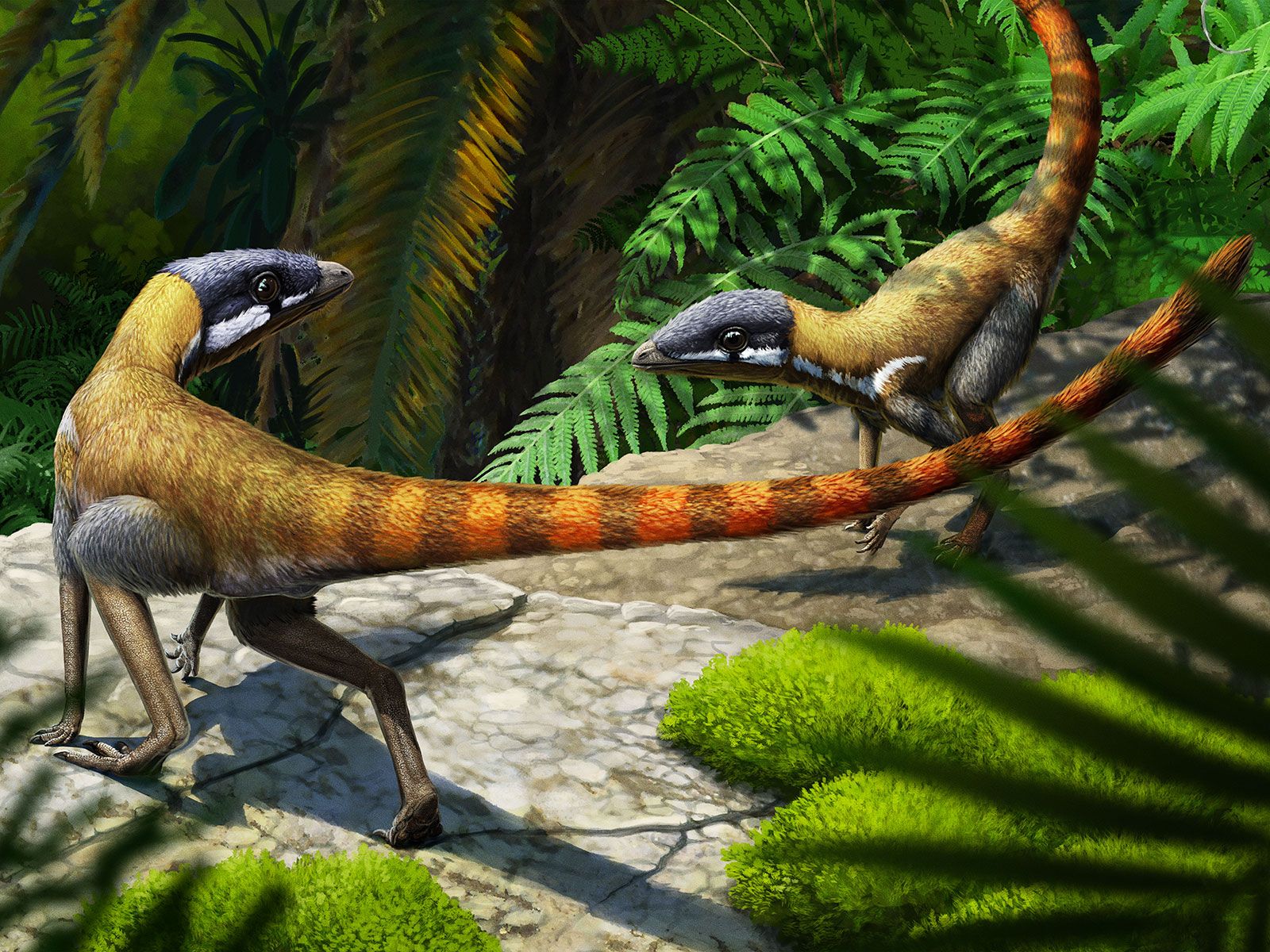 Pterosaurs were the first vertebrates to take to the air. Flapping with wings made of a membrane stretched over ludicrously-elongated fourth fingers, these flying reptiles filled the skies between 66 and 220 million years ago in a range of body sizes from sparrow to Cessna. But what did the ancestor of pterosaurs look like? A new analysis of a controversial fossil that is more than 100 years old has helped to resolve the longstanding paleontological puzzle. Using high definition CT scans, an international team of researchers has revealed that an agile Triassic reptile shared many traits in common with the flying saurians. The paleontologists report their findings today in Nature.

The initial discovery that would help bring pterosaur origins into focus was made over a century ago. In 1907, paleontologist Arthur Smith Woodward described a small reptile from the Triassic rocks of Scotland he named Scleromochlus taylori. The reptile was lightly-built, with longer hind legs than front legs, and over time paleontologists started to suspect that this little runner was an early forerunner of pterosaurs. The long legs and narrow feet of Scleromochlus, especially, resembled the legs and feet of pterosaurs. And subtle anatomical clues in the jaw also indicated that Scleromochlus was closer to early pterosaurs than dinosaurs or other Triassic reptiles. But experts couldn’t agree, partly because the fossil’s poor preservation hindered a close look at the telltale features that would resolve the debate.

The enigmatic fossil had to wait for technology to catch up to it. “We knew that there was the potential to learn more about Scleromochlus because of some tests we did on unprepared specimens of another fossil from the same area,” says lead author and National Museums Scotland paleontologist Davide Foffa. What looked like an unassuming block of sandstone turned out to have a gorgeous skeleton of a lizard-like animal called Leptopleuron inside, revealed by micro-CT scans. If the technique could reveal a hidden fossil, the researchers reasoned, then perhaps it could reveal previously unseen aspects of several known Scleromochlus fossils.

In life, Scleromochlus was only about seven inches long and much of that was tail. The bones of this ancient reptile are very small and delicate, so tiny that removing them from the rock might damage them. To get around that problem, Foffa and colleagues took micro-CT scans of multiple Scleromochlus fossils to assemble the first complete and detailed look of the entire animal. Not only was this an exercise in reconstructing in the reptile’s entire form, but the scans allowed researchers to zoom in on skeletal features that otherwise would be incredibly difficult to see with the naked eye.

Being able to scan tiny bones, some still encased in rock, allowed Foffa and colleagues to reconstruct Scleromochlus in more detail than ever before. While Scleromochlus doesn’t look very much like pterosaurs such as Pteranodon or Quetzalcoatlus, the reptile shares some telltale traits in common with the flying reptiles. Small skeletal details such as the shape of the upper jaw bone called the maxilla, the head of the thigh bone and the foot bones of Scleromochlus are similar to those of other reptiles proposed to be related to pterosaur origins. “This is an exciting paper that shows a lot of hard work” says University of Southern California paleontologist Michael Habib, who was not involved in the new study. Even as such scans become more accessible to paleontologists, he notes, assembling so many scans and reconstructing a fossil animal from them is “a heavy lift.”

The emerging picture of the reptile is quite a bit different from its later relatives. In specific terms, Scleromochlus belonged to a group of reptiles called lagerpetids that have recently been associated with the origin of pterosaurs. The bones of Scleromochlus don’t show any specific adaptations to climbing, hopping or any sort of behavior that might be considered relevant to how pterosaurs evolved flight. Yet the anatomy of the animal still shows a connection to the fliers, meaning that Scleromochlus represents an animal from what paleontologists often call a stem lineage, or the evolutionary branches that we can see leading up to the emergence of a particular group.

“Overall,” Foffa says, “this tells us that the common ancestors of pterosaurs and lagerpetids were likely small-bodied terrestrial animals, which stood on their toes, and were good runners.” In some ways, Universidade de Vigo paleontologist Alfio Alessandro Chiarenza says, the earliest members of the pterosaur lineage were not very dissimilar from dinosaur ancestors, meaning that wildly different reptiles evolved from similar starting points. More than that, this realization makes pterosaurs even stranger. All flying pterosaurs moved on four legs while on the ground, Habib notes, but they evolved from an ancestor that ran through ancient forests on two legs.

Potential pterosaur ancestors and relatives are hard to find in the fossil record, meaning that the proper analysis and categorization of animals like Scleromochlus can have a major affect on what experts think about how pterosaurs evolved. “This study does an unprecedentedly excellent and thorough job both in disentangling the anatomical details of Scleromochlus, early pterosaurs and dinosaurs,” says Chiarenza, who was not involved in the new study.

Paleontologists have been investigating pterosaurs and their origins with greater focus in recent years. The gap between the first definitive pterosaurs and their earliest relatives like Scleromochlus is about 18 million years, Foffa notes, as pterosaurs with transitional features–such as early iterations of wings–have yet to be uncovered. Still, Foffa notes, paleontologists have access to more powerful techniques to study fossils and are slowly refining what sorts of creatures to look for. “I see it as a slow process, piece by piece,” Foffa says. And, he notes, perhaps the key fossils are already waiting in a museum drawer somewhere. “Who knows,” Foffa says, “perhaps we have already found one and we simply are not able to recognize it yet.”

The recognition of Scleromochlus as a kind of proto-pterosaur will help paleontologists refine their search and will surely lead to more finds to come. “Now we can better visualize how one of these small, fleet-footed ancestors probably gave rise to the very first vertebrate to eventually conquer the sky,” Chiarenza says, “soaring over the heads of their dinosaur cousins.”