The EUâ€™s carbon club of one 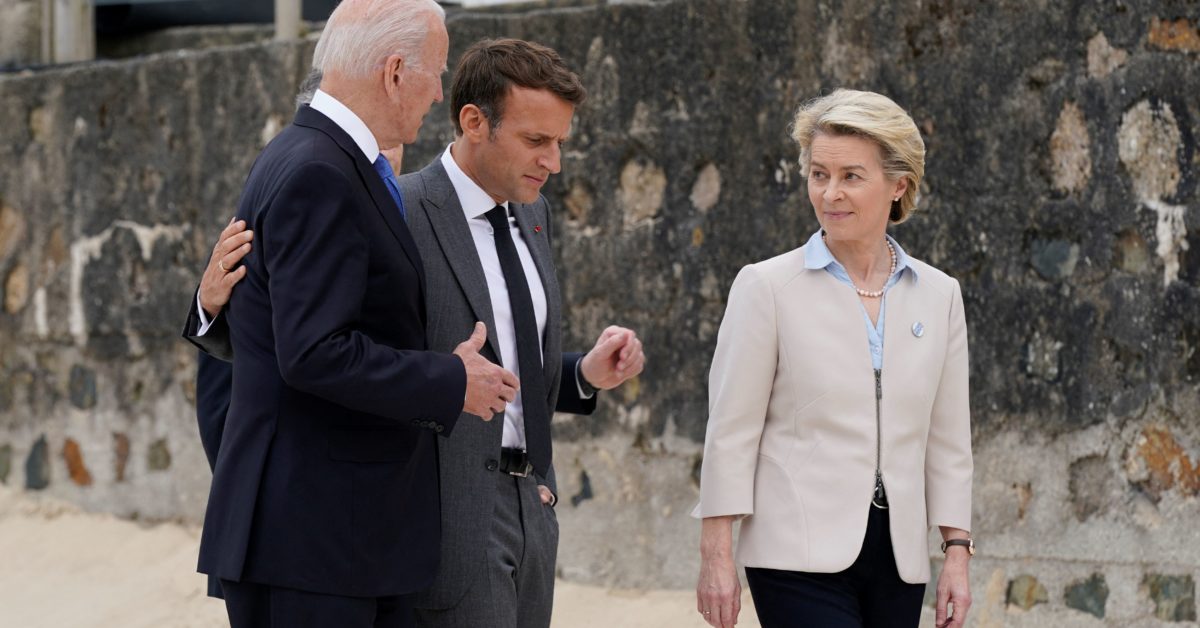 FALMOUTH, England â€” EU leaders want their G7 allies to join them in imposing trade barriers on climate laggards â€” but Japan and the U.S. aren’t so sure.

At this weekend’s summit of leaders in Cornwall, the wealthy countries â€” which have all committed to scrub out carbon pollution by 2050 at the latest â€” will concede they need to address the risk of industries fleeing to countries with weaker regulation,Â according to a person with knowledge of the latest draft of their statement.

An EU official said leaders would â€œdefinitelyâ€ discuss a plan Brussels is expected to roll out in July to hit steel, aluminum, cement, fertilizers and electricity with a carbon border tariff based on the EU carbon price.Â

If other countries followed suit, it could lead to the creation of a carbon club of nations, in which high carbon imports are taxed at the border.

But while Japan and the U.S. recognize the problem, they are not yet ready to back a concrete solution. Neither has introduced a national system to price carbon. That puts them in a tight spot, especially U.S. President Joe Biden, who is unlikely to get such a measure through Congress.Â

U.S. climate envoy John Kerry earlier this year urged the EU to wait until after the COP26 climate change conference in November, where other countries have been asked to come forward with credible plans to reduce emissions. If they do so, the reasoning goes, thereâ€™s no need for a potentially divisive trade measure.

Japanese government spokesman Tomoyuki Yoshida said the EUâ€™s plans to tax carbon imports were â€œone of the quite controversial, heated discussions among the concerned parties.â€

Similarly, on Friday, Yoshida warned that the G7 should not preempt the COP26 conference â€”Â the U.N. climate gathering that takes place in November in Glasgow, Scotland.

Other G7 members already have a carbon price, but they aren’t jumping in with the EU yet. The U.K. hosts have not made official space for talks on carbon border adjustments on the agenda. A spokesman for Prime Minister Boris Johnson said: “That is something leaders may wish to discuss, but I wouldnâ€™t want to preempt that.” It â€œmay come up,â€ Canadian High Commissioner to the U.K. Ralph Goodale told reporters on Friday.

Brusselsâ€™ fear is that if big economies such as America, China and Japan donâ€™t agree to put a price on carbon, EU industries will simply move there and ship dirty products back into Europe â€” a problem known as â€œcarbon leakage.â€Â

Yoshida, the Japanese spokesman, said any measure to tackle carbon leakage should be compatible with trade rules that prohibit discrimination against foreign imports and said such measures needed to be â€œrealistic.â€

Instead of a bargain to tax carbon imports, the G7 are planning to support infrastructure investments for renewable energy projects and infrastructure in developing countries, according to two officials with knowledge of the negotiations. Although the plan has been criticized for a lack of new financial commitments.

EU countries say thatâ€™s not enough. â€œThere’s always the question of how much the public sector will give in public investment. But I think we should also demand more and set the framework conditions so that private investment flows,â€ said a German official, arguing carbon prices were needed to steer private investment.Â

â€œSo far, we have not achieved very much in this areaâ€ at previous G7 and G20 summits.Â  â€œWe hope that this summit will â€¦ provide a strong impetus, or at least a better impetus,â€ the official said.