The Fear Factor: Bringing the Beijing Treatment to Hong Kong 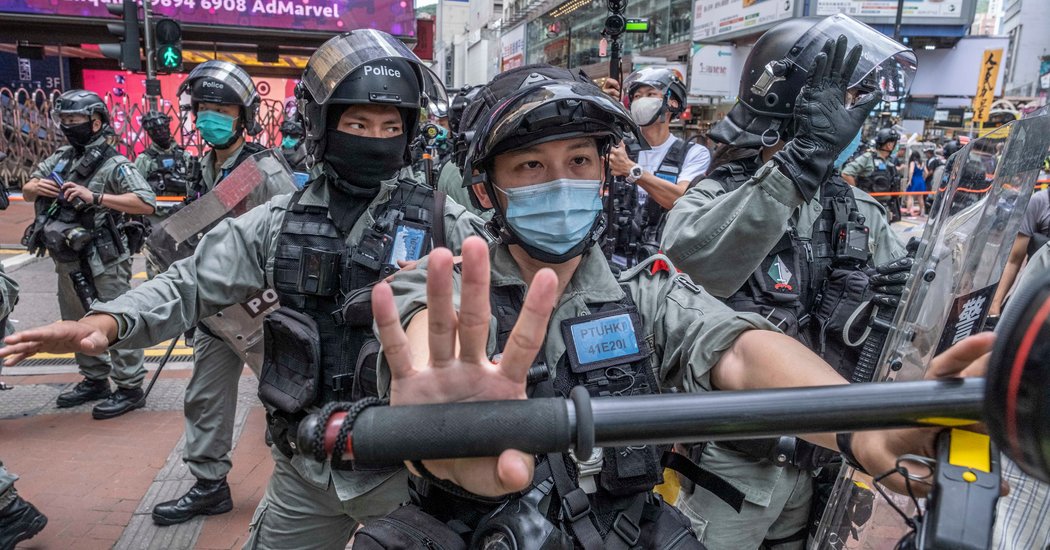 After the Chinese legislature unanimously passed the national security law that would curb free speech and protests in Hong Kong, my initial thought was, â€œIs Hong Kong just like Beijing now?â€

The first time I felt that Hong Kong was becoming like Beijing was in the spring of 2017. I had been invited to lunch with Chan Kin-man, a professor at the Chinese University of Hong Kong and a co-founder of the 2014 Occupy Central protests, which became known as the Umbrella Movement.

Only days before, he had been charged over his role in the pro-democracy protests. We sat in the garden of a dim sum restaurant, facing a beautiful bay in the New Territories region of Hong Kong. Bougainvillea was blooming around us. Mr. Chan talked about how he was preparing himself physically and psychologically for life in jail.

It was dÃ©jÃ  vu for me. Iâ€™d had many similar conversations with people in Beijing over the years. Like Mr. Chan, they were intellectuals who aspired to bring democracy, liberty and justice to China. Like Mr. Chan, they became thorns in the governmentâ€™s side because they talked about, wrote about or organized activities to pursue those ideals.

Since 2013, a growing number of activists, intellectuals and human rights lawyers have been detained by the authorities. Most were released after a few weeks, a few months, or a year. A couple of them are still behind bars.

For a while, jail was a popular topic at dinner tables. A man who spent a year in prison after the 1989 Tiananmen Square crackdown liked to say that the guards and cellmates treated political prisoners with more respect in his time than they did now. A woman who was jailed for political reasons both in the late 1970s and in 2014 compared her experiences then and now at a big welcome back dinner on Christmas Eve. A man we call â€œPangzi,â€ or â€œFatty,â€ shed 60 pounds after a year behind bars. He talked about how he was brutally beaten. Once, the assault was so bad that he lost control of his bowels.

The other guests at the tables listened, then discussed what they might do when that day arrived, just like my conversation with Mr. Chan three years ago.

Mr. Chan said he was trying to decide what books he would bring with him to jail. In Hong Kong, every inmate is allowed to keep six books. We joked that it was great he had the freedom to choose his books.

In the mainland, prisoners have very limited access to reading material. One story a law professor likes to tell is that years ago, he tried to send two books to a dissident friend in jail.

The guard rejected â€œFortress Besieged,â€ a satirical novel about the lives of Chinese intellectuals during World War II. It is famous for the quote, â€œMarriage is like a fortress besieged: those who are outside want to get in, and those who are inside want to get out.â€ The guard believed it was a â€œwar book,â€ so, deemed it not appropriate for inmates.

Then the guard turned to â€œThe Federalist Papers.â€ The law professor, who faced potential retribution for speaking out, looked into his eyes and said it was a book about patriotism. The guard waved it in.

Mr. Chan ended up reading 50 books in jail. When he got out in March after serving 11 months, he was seen holding the novel â€œLives of Girls and Womenâ€ by Alice Munro, the Canadian Nobel laureate. He looked happy, healthy and at peace with himself.

As I woke to the news of the passage of the national security law on Tuesday morning, I wondered: Has the difference between Hong Kong and Beijing come down to the books one is allowed to read in jail?

The new law allows for prosecuting critics of the Chinese government in Hong Kong. The law lays out new crimes in the territory like inciting separatism and colluding with foreign powers. The government will also establish a new security agency in the territory.

This means the cityâ€™s pro-democracy protesters will be likely subject to the same punishment as mainland dissidents, such as jail time and constant visits from state security officers.

An hour after the lawâ€™s approval in Beijing, Joshua Wong, the activist who has become the best-known face of the Hong Kong pro-democracy movement, announced that he would withdraw from Demosisto, the political group he co-founded.

â€œFrom now on, Hong Kong enters a new era of reign of terror, just like Taiwanâ€™s White Terror, with arbitrary prosecutions, black jails, secret trials, forced confessions, media clampdowns and political censorship,â€ he wrote on Twitter. He was referring to the 40-year period of political repression in Taiwan when more than 100,000 dissidents were imprisoned and at least 1,000 were executed.

Two other co-founders of the group also announced their withdrawals after the passage of the law. A few days earlier, Anson Chan, another pro-democracy figure and the cityâ€™s former No. 2 official, said she would step back from civic and political engagements because of the death of her daughter in May.

At the same time, pro-democracy Hong Kong residents are deleting their Twitter accounts for fear that their postings could incriminate them under the new law. Writers are calling media outlets to delete past articles.

These are familiar sentiments in Beijing. After dozens of outspoken critics were jailed and many more social media accounts were deleted by censors in 2013 and 2014, liberal intellectuals went quiet. Writers and academics could no longer get their books and articles published. Their speeches and seminars were canceled. Human rights lawyers were almost wiped out. Many journalists quit to become public relations managers for tech companies.

Those were changes caused by external forces. People were changing internally too. Gradually, most liberal intellectuals stopped writing and speaking publicly, partly out of fear and partly out of a sense of futility.

Earlier this year, when many nationalistic youths went after people who supported Fang Fang, the writer and government critic in Wuhan, a software program surfaced that could delete all social media postings with one click. The young nationalists would dig into these criticsâ€™ past posts on the Twitter-like social media platform, Weibo, unearth writings that they deemed anti-China and label their authors as enemies of the people. A novelist used the software to delete 11,000 of her posts on Weibo.

The law professor who sent â€œThe Federalist Papersâ€ to his jailed friend had nothing left to delete. He used to be active on Weibo and had registered more than 300 accounts between 2009 and 2014. One after another, the accounts were deleted by the censors.

Now, he keeps an anonymous account just for browsing. He used to be a prolific writer but no longer has a desire to write, both because no mainland publisher would dare to publish his books and because heâ€™s worried that his writing could bring catastrophe to his family.

He told me last week that he felt ashamed that he couldnâ€™t be as brave as Xu Zhiyong, the dissident who wrote an open letter to Chinaâ€™s leader, Xi Jinping, urging him to resign for mishandling the coronavirus crisis. Mr. Xu, who had earlier served four years in prison for organizing the New Citizens Movement, has been detained since February and was recently charged with â€œinciting subversion against the state.â€

I caught up with Mr. Chan after the passage of the national security law. â€œWith the law, weâ€™re living in a big prison,â€ he said. â€œThereâ€™s no difference between Hong Kong and Beijing now.â€

In another sign of the rising anxiety level in Hong Kong, his new book, â€œChan Kin-man: Letters from Prison,â€ sold 2,000 copies in presale and bookstore orders this month. Books like this usually sell only a few hundreds copies, he said.

The demand wasnâ€™t only driven by an interest in the prison experience, he said. â€œEveryone needs to face the question: In an environment with diminishing freedom and growing suppression, how are we going to keep cool and not crash?â€

As someone who dedicated his life to studying and building civil society, Mr. Chan said he was confident that in the long run Hong Kong would prove its resilience. People just needed time to adjust to the darkness, he added.

â€œOn this long and distant road, sometimes I really feel that the road ahead is boundless and obscured, and sometimes the light is very dim,â€ he told his students at his last class before retiring in 2019. â€œWhat can I do in this dark night? All we can do is look at the stars.â€