The Government Is Facing Legal Action Over The Homes For Ukraine Scheme. Here’s Why 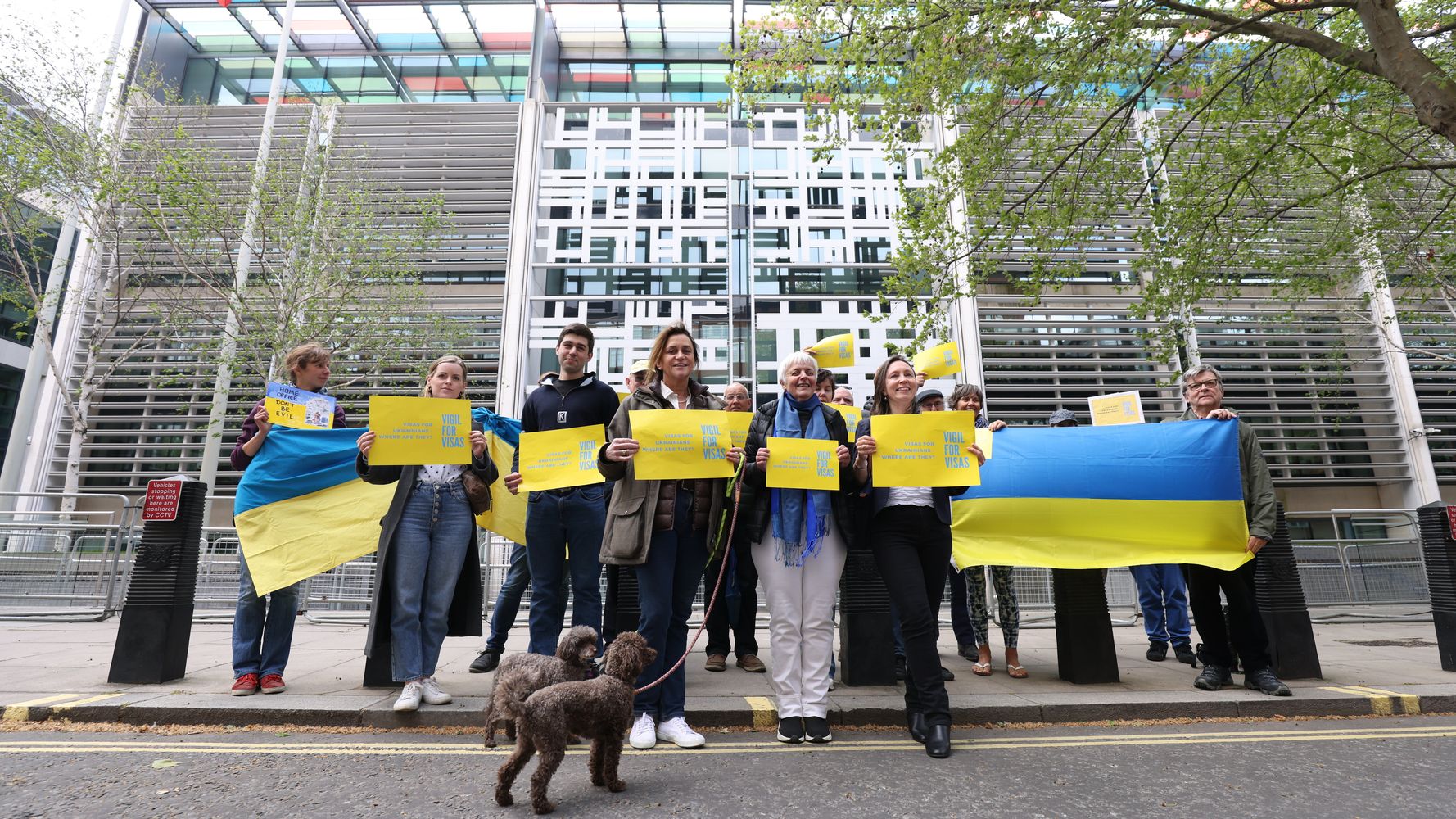 Boris Johnson has won plaudits in Ukraine for the UK’s support of the besieged country as he gave a speech to MPs in Kyviv.

Speaking via video link to the Verkhovna Rada, the prime minister channelled the words of Winston Churchill – describing Ukraine’s resistance against Vladimir Putin’s invasion as its “finest hour, that will be remembered and recounted for generations to come” – as he set out a new £300m package of support for the Ukrainian military.

“I have never seen this many standing ovations for a single speech. Ukraine is certainly lucky to have a friend like the UK.”

Boris Johnson addressing Ukrainian parliament today. I have never seen this many standing ovations for a single speech. #Ukraine is certainly lucky to have a friend like the #UK pic.twitter.com/xZWlCvNDgB

But domestically, his government’s policies on Ukraine have prompted a cooler response.

Would-be sponsors under the Homes For Ukraine visa scheme are threatening the home secretary Priti Patel with legal action on behalf of hundreds of refugees who have spent weeks waiting to come to the UK.

Latest figures show that of the 86,100 people given Ukraine scheme visas, 27,100 have so far arrived in the UK, and ministers are facing action over “inordinate and unreasonable delays” in processing hundreds of visa applications made in March by refugees.

Here is some information about the Homes for Ukraine scheme and the waits refugees and their UK sponsors have been experiencing.

What is the scheme?

The Homes for Ukraine programme allows individuals, charities, community groups and businesses to bring people escaping the war to safety even if they have no ties to the UK.

Anyone with a room or home available for at least six months can offer it to a Ukrainian individual or a family, though those offering to host will be vetted and Ukrainian applicants will undergo security checks.

The scheme opened for applications more than six weeks ago on March 18.

How many UK sponsors have offered up their homes?

More than 200,000 would-be hosts have registered their interest.

Members of the public have been praised for their “amazing” and “incredible” generosity.

Government officials believe some people applied for visas so they have the option of coming to the UK but are staying in countries bordering Ukraine so they can return home sooner, while others have changed their minds.

There are also multiple cases where Ukrainians are unable to travel because some family members, usually young children, are waiting for longer than their relatives for their documents.

And there are reports of some refugees not being made aware that they have permission to travel.

Why is the government facing legal action?

There have been widespread concerns about the length of time refugees have been waiting for their visas under the scheme.

Would-be hosts have compiled figures showing that hundreds of Ukrainians who applied for visas within the first two weeks of its launch are still waiting.

The groups who are threatening legal action on behalf of those waiting – Vigil 4 Visas and Taking Action Over The Homes For Ukraine Visa Delays – say the delays have put people in Ukraine and border countries at risk and heaped “considerable pressure and strain” on UK hosts.

A judicial review could be brought on the grounds that the Home Office has a policy of delaying the March applications and deciding later applications instead – or that the system is “so chaotic and unstable” that it is unreasonable.

What has the government said?

In an interview with ITV’s Good Morning Britain, Johnson admitted the UK could have reacted faster in helping Ukrainian refugees, though he said “large numbers” are now coming to Britain.

Previously, the government has acknowledged that waits of several weeks for some refugees are “unacceptable”.

Ukraine’s First Lady Olena Zelenska has spoken exclusively to Good Morning Britain about the support the UK has given to Ukraine.

She says ‘every Ukrainian knows that Great Britain is our reliable ally.’

But she says the govt’s Homes for Ukraine scheme needs improvement. pic.twitter.com/BSYvE1LJuG

In early April, Patel apologised “with frustration” after coming under fire over the time it was taking for refugees to arrive.

And refugees minister Lord Harrington previously said the process was too long and not “as seamless as it should have been”.

A government spokesman said it has streamlined the visa system, simplified the forms, and boosted staff numbers and that officials are “now processing visas as quickly as they come in”.