The Imperfect Comparison Of Kyrsten Sinema To John McCain 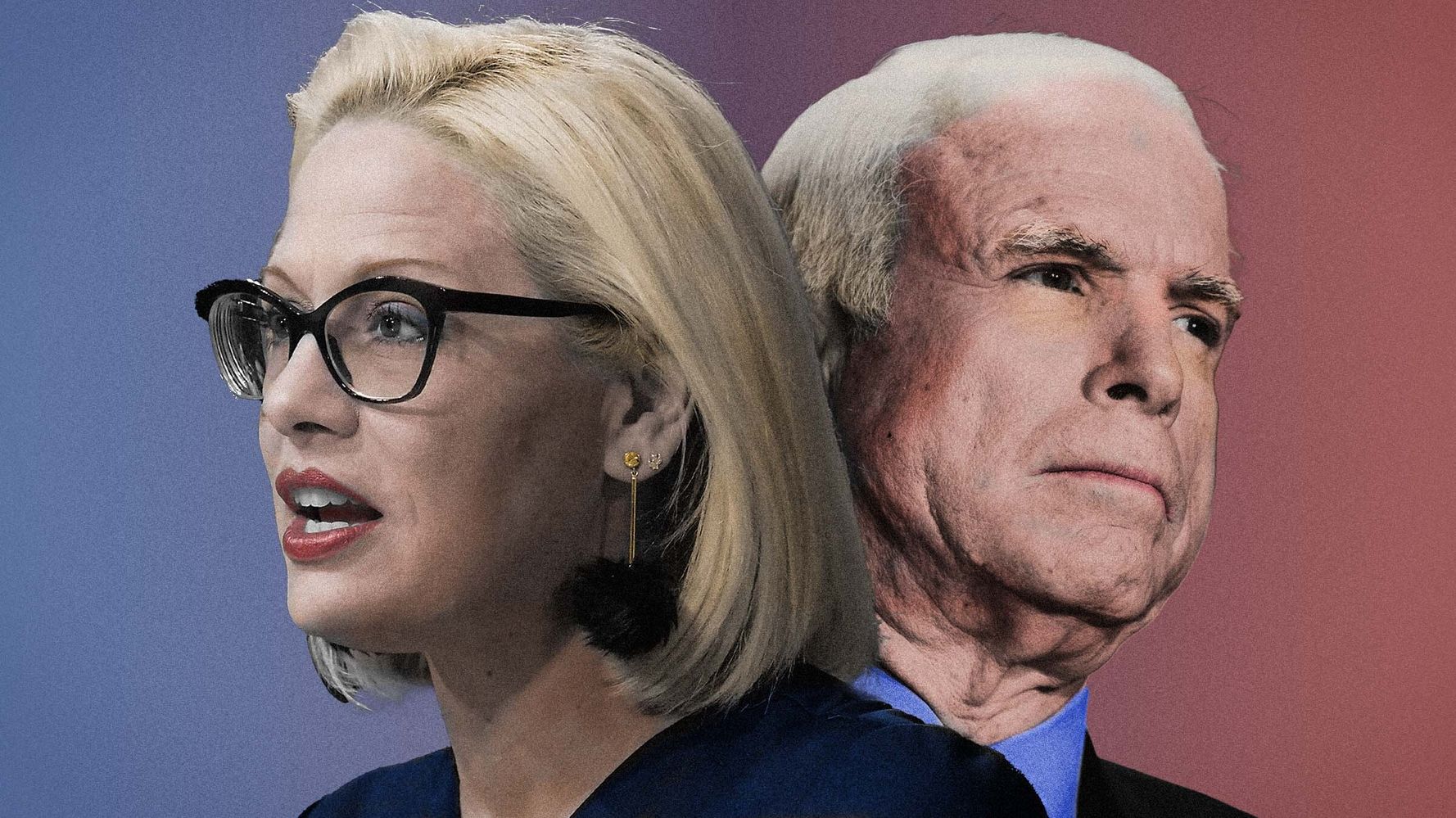 Itâ€™s hard to read a story about Sen. Kyrsten Sinema (D-Ariz.) these days and not see some mention of John McCain, the stateâ€™s late Republican senator and war hero known for his â€œmaverickâ€ streak.

Sinema has been getting national attention for insisting that President Joe Biden scale back his ambitious domestic agenda, saying she wonâ€™t support a package that costs $3.5 trillion over 10 years. Without her support, and that of fellow conservative Democrat Joe Manchin (W.Va.), Senate Democrats donâ€™t have enough votes to move forward on a reconciliation bill.

Her willingness to buck her party has earned her endless comparisons to McCain, a man she has called her â€œpersonal hero.â€ She cited his work in her first floor speech as senator, and during her 2018 run for the Senate, she would reportedly tell staffers that she wanted to be â€œthe next John McCain.â€

And many people who worked for the late senator â€• a fiercely loyal group who still look out for his legacy â€• seem to be just fine with the connections.

â€œI think theyâ€™re great. I think sheâ€™s great,â€ said Joe Donoghue, who worked for McCain for 31 years and was his longest-serving aide. He was particularly pleased that Sinema has refused to call for abolishing the filibuster, noting that McCain was a strong supporter of the 60-vote threshold for passing most legislation.

â€œI think that he would be really pleased to see Arizona continue to be represented by independent-minded people, very much in the mold of him and Barry Goldwater and even Sen. [Jeff] Flake,â€ said another former McCain staffer, who, like others in this piece, requested anonymity to speak freely.

Members of the McCain family have also defended Sinema. The late senatorâ€™s daughter, Meghan McCain, called Sinema a â€œmaverickâ€ and criticized journalists and pundits who praised her father but are â€œripping apartâ€ the Democrat. Cindy McCain, John McCainâ€™s widow, said Sinema was â€œfollowing her heart.â€

And Sen. Lindsey Graham (R-S.C.), one of McCainâ€™s closest friends in the Senate, also said he saw similarities.

â€œI think thatâ€™s one of the things that led to the maverick label, right? Sheâ€™s certainly doing her share of saying â€˜no.â€™ Yeah, I guess that makes sense when you think about it,â€ he told HuffPost.

But Sinema has actually voted against her party more often than McCain generally did. In the last Congress, she bucked her party 22% of the time.

Grant Woods was Arizona attorney general from 1991 to 1999 and served as McCainâ€™s first chief of staff in Congress. In 2018, he switched parties, became a Democrat and prominently endorsed Sinema for Senate. He has since been critical of her, particularly her support for keeping the filibuster.

Woods is less generous than some other former McCain staffers about similarities between the two.

â€œIf you are basing your career on a marketing strategy of claiming to emulate a maverick, you are by definition not a maverick,â€ added historian and journalist Rick Perlstein, who has chronicled the conservative movement.

McCain broke from his party more than the average senator â€• including on some key votes â€• although his most mavericky years came later in his career, particularly during the presidency of George W. Bush.

McCainâ€™s reputation as a war hero, and his early days in the Navy, never fully left him. He often seemed like a soldier looking for a fight, whether it was with Saddam Hussein or campaign finance reform.

A major part of what has been frustrating Democrats about Sinema during the current reconciliation debate is that itâ€™s not clear whatâ€™s guiding her. She has refused to say exactly what would get her vote for the social infrastructure bill, except that she doesnâ€™t want it to be $3.5 trillion over 10 years.

â€œIt definitely doesnâ€™t seem like thereâ€™s any value or principle at the root of it,â€ added another former McCain staffer. â€œIt seems like sheâ€™s either doing it to be the power broker â€¦ or because she is trying to get something else out of it.â€

â€œThereâ€™s a difference, it turns out, between being a maverick and being a narcissist,â€ New York Times columnist Michelle Goldberg wrote in a scathing column on Sinema this month.

Part of the reason McCain received his maverick reputation was for opposing his party in fights against corporate interests, including taking on the tobacco industry in the 1990s and limiting the role of corporate money in politics with his bipartisan campaign finance reform legislation in 2002.

Sinema does not have that same reputation in her party, receiving significant criticism for her ties to, and contributions from, corporations and the business community.

Still, theyâ€™re both deeply political figures, even if it has come out in different ways. Before she was in public office, Sinema was a vocal liberal. She joined anti-war protests as a law student and told The Arizona Republic in 2003 â€œthat the real Saddam and Osama lovers were Ronald Reagan and George H.W. Bush.â€ In 2002, she ran for the state legislature as an independent Green Party-aligned candidate.

Sinema lost that race. But two years later, she won as a Democratic candidate. And she soon found success, and attention, by working with Republicans in the legislature.

McCain remained conservative throughout his career, even if he would work with Democrats on some key issues. But unlike Sinema, he was better at using the media to his advantage, which readily played up his â€œstraight talkâ€ persona. Sinema is notorious for refusing to talk to reporters on Capitol Hill. McCain, however, was one of the most voluble senators. As a result, he was frequently quoted in news stories and was a constant â€• and, frankly, too dominant â€• presence on the Sunday-morning talk shows.

McCain also made the clear political calculation to bring Sarah Palin, then the governor of Alaska, onto the Republican presidential ticket as his running mate in 2008, even though they went together about as well as oil and vinegar. The thought was that sheâ€™d help motivate the conservative base â€• which she did, but in a way that spiraled far out of his control and lasted long beyond the 2008 race in a way that dismayed McCain and many of his admirers.

Arizona has had its fair share of interesting senators who have received attention for breaking with their party at key moments. Flake, who retired in 2019, was a reliable Republican vote (siding with Donald Trump 81% of the time). But he garnered perhaps the most attention at the end of his tenure, in 2018, when he forced his party to delay a vote on Supreme Court nominee Brett Kavanaugh so that the FBI could investigate sexual assault allegations. (He ultimately voted for Kavanaugh.)

And Goldwaterâ€™s legacy still looms large over Arizona politics. Perlstein, the author of a biography on Goldwater â€• â€œBefore the Storm: Barry Goldwater and the Unmaking of the American Consensusâ€ â€• also said thereâ€™s no comparison between Sinema and the late iconic senator.

â€œThe thing that made Goldwater Goldwater was his utter lack of political calculation, his shoot-from-the-hip style. Also, quite frankly, for most of his career, his hyperpartisanship. I just donâ€™t see it,â€ he said.

The White House and Senate Democrats continue to look for some way to get Sinema and Manchin on board with their social infrastructure package. But Donoghue hopes that Sinema â€œsticks with it.â€

â€œI wish that there were a lot more members like her, particularly Republican members that didnâ€™t sit back and let President Trump run wild the way that he did,â€ he said. â€œThere should have been more Republicans that would step forward and call them out and have some backbone.â€