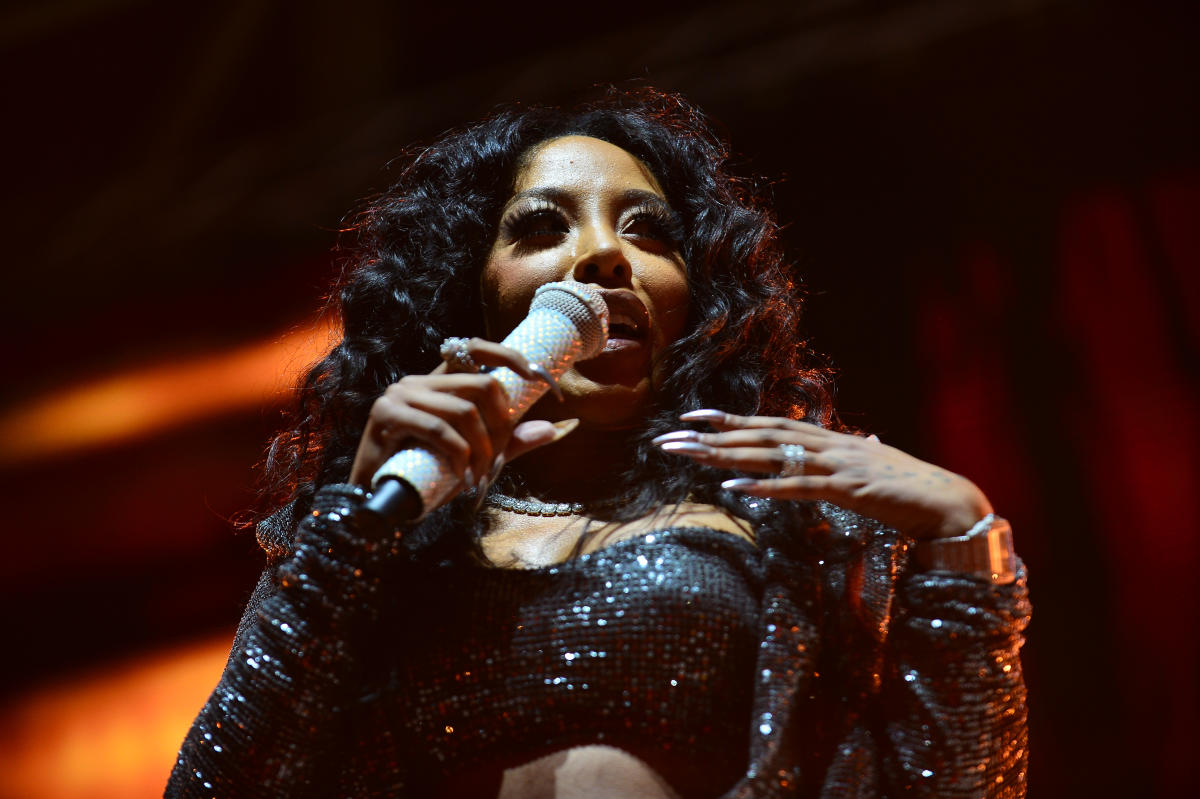 The It List is Yahoo’s weekly look at the best in pop culture, including movies, music, TV, streaming, games, books, podcasts and more. Here are our picks for Jan. 24-30, including the best deals we could find for each. (Yahoo Entertainment may receive a share from purchases made via links on this page.)

Reality star and singer K. Michelle has been outspoken about the “black market” butt injections she received years ago â€” they nearly killed her, and she’s called them “the worst decision of my entire life” â€” and now she’s helping others struggling with procedures that left them looking not at all as they expected and, worse, feeling awful. In a preview of the series, she connects with a woman whose botched breast implant surgery went very wrong. Her breasts became infected and, as she recounts in the first episode, her stitches were taken out without any medication whatsoever. “It’s so hard to trust someone again,” the woman says, as Michelle tears up. â€” Raechal Shewfelt

STREAM IT: As if! Watch Alicia Silverstone battle a great white shark in the lost-at-sea thriller The Requin

Alicia Silverstone leaves her excess baggage at home for an unexpected voyage into Jaws territory in the new woman vs. shark thriller The Requin. The Clueless star plays Jaelyn, an American tourist on a beachside vacation in Vietnam with her husband (James Tupper) following personal tragedy. But that relaxing getaway takes a dangerous turn when a tropical storm blows through and knocks their villa into the sea. Suddenly adrift on open water, the couple has to survive the elements and also avoid the uhâ€¦ jaws of a school of great white sharks that are loitering around their ever-shrinking life raft. This exclusive clip from the film gives you a taste of how Silverstone battles her aquatic foe. Too bad the former Batgirl didnâ€™t keep any shark repellant in her utility belt after her tour of duty in the Batcave. â€” Ethan Alter

The Requin premieres Friday, Jan. 28 in theaters and on most digital and on most VOD services, including Apple TV.

STREAM IT: See Jaime Lannister cook up a storm (of swords) in the Danish foodie drama A Taste of Hunger

Breakout Game of Thrones star Nikolaj Coster-Waldau puts down the Valyrian steel and picks up a chefâ€™s knife in A Taste of Hunger, which marries the mouth-watering kitchen theatrics of movies like Big Night and Chef with the addictive marital melodrama of Unfaithful. Acting in his native language, the former Jaime Lannister slices and dices meat, potatoes and more as the top chef at one of Copenhagenâ€™s buzziest new eateries, which is funded by his wife and business partner, Maggi (Katrine Greis-Rosenthal). The duoâ€™s future rests on securing an all-important Michelin star, but that dream seems poised to self-destruct when the kitchen staff has a bad night, and Maggi intercepts a letter exposing her infidelity with a former co-worker. This exclusive clip from the film spotlights Coster-Waldauâ€™s serious cooking skills… and should make GOT stans hungry to see more. â€” E.A.

A Taste of Hunger premieres Friday, Jan. 28 in theaters and on most VOD services, including Apple TV.

WATCH IT: Tim Roth tries to make his life a permanent vacation in Sundown

The hardest part of almost any vacation is going home at the end. Thatâ€™s why Tim Roth experiments with a novel idea in his latest movie, Sundown… namely, not going home. Directed by Mexican auteur, Michel Franco, the film stars Quentin Tarantinoâ€™s longtime scene-stealer as Neil Bennett, the son of a wealthy London family who joins his sister (Charlotte Gainsbourg) and her kids on their Acapulco vacation. But when a tragedy calls them back to the U.K. ahead of schedule, Neil ditches his relatives and decides to stay on, a choice that triggers a cascade of minor and major consequences. As Francoâ€™s tightly-paced narrative unfolds, each of those consequences also brings new information about his past â€” and future â€” to light. This exclusive clip from the film reveals how Neilâ€™s permanent vacation begins with a little lie that eventually grows into bigger lies. â€” E.A.

STREAM IT: Take Out With Lisa Ling devours culture and, of course, food

Yum. Journalist Lisa Ling’s latest project looks quite tasty. It’s an Anthony Bourdain-style docuseries that trails her visiting places like Little Saigon in California’s Orange County and the bayous of Louisiana, to visit one of the country’s thousands of Asian restaurants. Ling, whose parents owned a Chinese eatery, tells stories about the Asian American families whose tales began in a restaurant through a look at the delicious food that they serve. “It is time that we learn about a community that has been integral to America’s development but has largely been ignored by American history,” Ling said in a statement. “My own family’s path to their American dream started in a Chinese restaurant, and I cannot wait to learn the stories of those whose journey paralleled mine throughout different parts of this country.” It also examines the question of, as one interviewee puts it, “How much do you assimilate without losing sense of self?” â€” R.S.

WATCH IT: Janet Jackson regains control of her narrative

A four-hour event coinciding with the 40th anniversary of the pop iconâ€™s debut album, the Lifetime/A&Eâ€™s Janet Jackson. allows fans behind the velvet rope, so to speak. The result of filmmakersâ€™ unprecedented access to the superstar for more than three years, the docuseries promises to tell â€œthe definitive story on Janet Jacksonâ€ â€” exploring her personal and professional triumphs and tragedies, and revealing â€œsome of her most intimate moments ever caught on camera.â€ â€” Lyndsey Parker

STREAM IT: One of these funny people mustâ€™ve committed murder in Apple TV+â€™s The Afterparty

How to describe the ensemble Lord & Miller (The Lego Movie, The Last Man on Earth) have assembled for their new murder mystery comedy The Afterparty? The Hollywood Reporterâ€™s Angie Han says it best: â€œThe Afterparty is stuffed with actors who tend to be the funniest parts of whatever project theyâ€™re in, but who meld together here as the ensemble of a comedy geekâ€™s dreams.â€ Sam Richardson, Ilana Glazer, Ben Schwartz, Ike Barinholtz, ZoÃ« Chao, Jamie Demetriou. Check. They all play partygoers suspected of killing their famous ex-classmate (Dave Franco) at his beachside mansion after their high school reunion. Investigating the death? None other than Tiffany Haddish… and she brought popcorn. â€” Kevin Polowy

STREAM IT: HBO gets its own Downton Abbey with the new period drama The Gilded Age

You gotta give it up for HBO: When the network decided to get into the Downton Abbey game, they went straight to the source. Downton creator, Julian Fellowes, is behind The Gilded Age, a new period drama that plays out in the wealthy manors of late 19th century New York City. Christine Baranski plays the snobby matriarch of an old money family, who seriously side-eyes the nouveau riche couple (Morgan Spector and Carrie Coon) looking to spend their way into high society. Caught between the two households is Baranskiâ€™s orphaned niece (Louisa Jacobson) â€” a change agent whose future might seriously upset Manhattanâ€™s gilded age social order. Expect Fellowes to bring the deluxe Downton combination of lush production values and addictively soapy storylines. â€” E.A.

WATCH IT: The private world of Hugh Hefner is explored in Secrets of Playboy

Hugh Hefner’s Playboy empire is put under a modern day microscope in this shocking documentary. Was he a symbol of female empowerment? Or a man who viewed women as interchangeable sex objects? The whole Playboy machine is taken apart in this series, featuring interviews with former playmates, members of Hefner’s staff and inner circle, his friends and the publisher’s ex-girlfriends, including Holly Madison, Bridget Marquardt and Sondra Theodore. The women don’t hold back. â€” Taryn Ryder

WATCH IT: Oscar-nominated documentary Time gets more it to shine on Criterion

Time is not the story of a wrongfully convicted man. Sibil Fox Richardson (aka Fox Rich), the tireless heroine at the heart of Garrett Bradleyâ€™s shattering 2020 documentary Time, never denies her husband did the crime. In fact, she was an accomplice in the robbery, and served her own time. But the fact that her husband received a preposterous 60-year sentence lead her on a decades-long fight for leniency, which she documented in self-taped videos while raising six children. Bradley helps evolve Richardsonâ€™s cause into one of the most powerful indictments of the U.S. justice system weâ€™ve ever seen in a film that earned an Oscar nomination a year ago for Best Documentary (it lost out to My Octopus Teacher). Originally released in only digital form on Amazon, Time now gets a director-approved special edition Blu-ray via The Criterion Collection, featuring audio commentary, new interviews with the Richardsons and more. â€” K.P.

Time: The Criterion Collection is now available. Buy it on Amazon.

PLAY IT: Get ready for The Batman with Spin Masterâ€™s new line of movie-inspired toys

The transition from Batfleck to RBatz is nearly complete with the impending March 4 release of The Batman, starring Robert Pattinson as the latest Dark Knight. Before that Matt Reeves-directed movie flies into theaters, Spin Master is stocking shelves with movie-inspired toys, including 4-inch and 12-inch action figures inspired by Pattinsonâ€™s Caped Crusader, as well as ZoÃ« Kravitzâ€™s Catwoman and Colin Farrellâ€™s Penguin. You can also get behind the wheel of the all-new Batmobile with a 4-inch scale model that shines LED engine lights through the darkness and a radio-controlled Turbo Boost version that can speed around corners in pursuit of Gotham Cityâ€™s most villainous villains. â€” E.A.

Spin Masterâ€™s The Batman toys are available at Target.

HEAR IT: Urge Overkill return from their exile in Guyville

Oui by Urge Overkill is available Friday, Jan. 28 to download/stream on Apple Music.