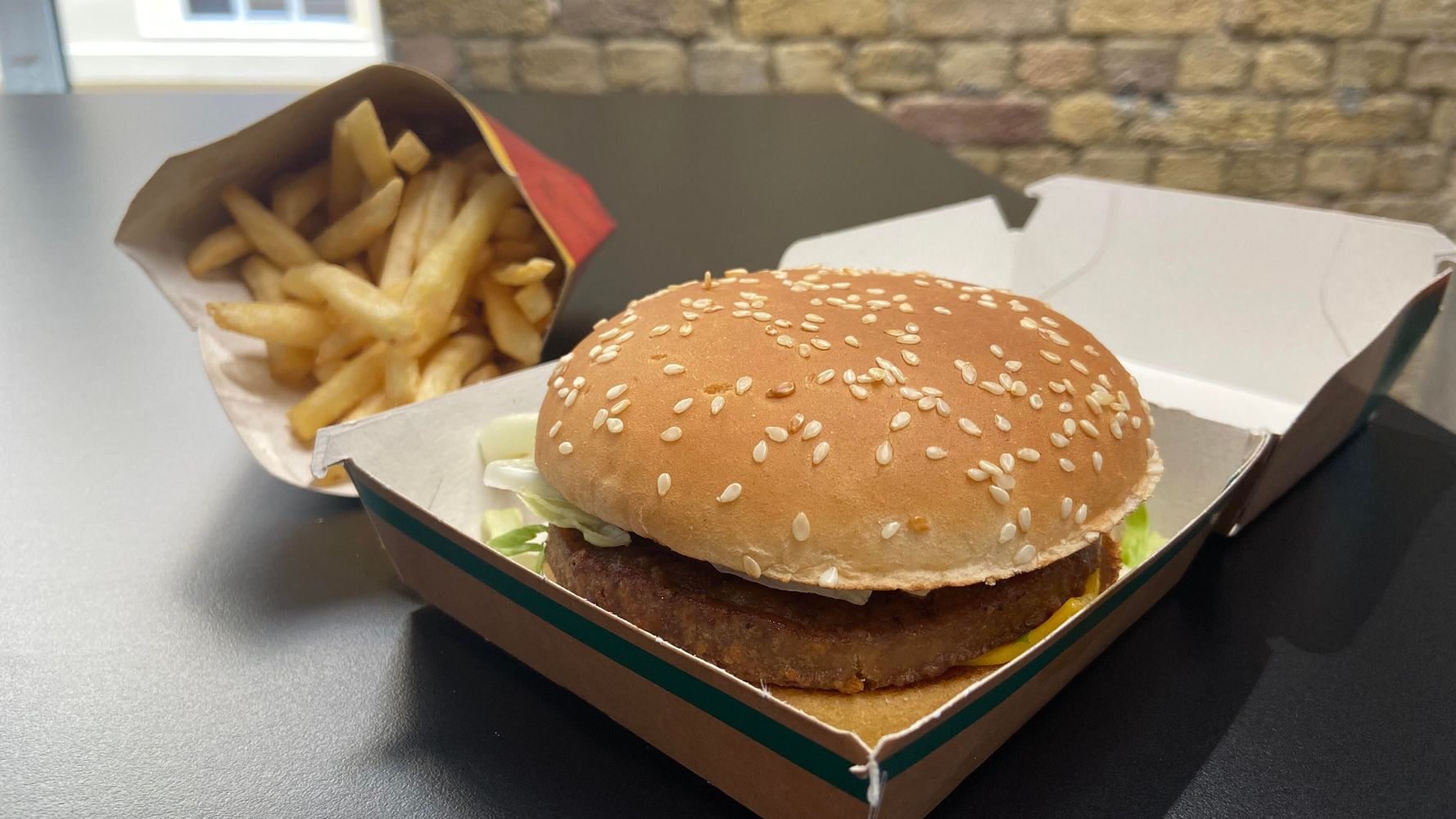 So, we finally have the first new Adeleâ€™s song in years. But itâ€™s not the only launch that has left Twitter hungry for more this week.

McDonaldâ€™s new McPlant burger has also hit 250 branches around the country, following a test-run in Canada and a trial in 13 UK restaurants in September.

The fast food outlet says the McPlant is its first ever plant-based burger and, in the UK and Ireland at least, itâ€™s accredited as vegan by the Vegetarian Society.

The impressive burger stack is built around a plant-based patty from Beyond Meat, a slice of cheese made from pea protein, a new vegan sauce, as well as that Maccies mix of mustard, ketchup, onion, pickles, lettuce and tomato.

Oh, and a vegan sesame bun.

happy McPlant day to those who celebrate 🌱☺️

The HuffPost team was obviously keen to put this heavily-touted product to the taste-test. But not before we checked â€“ and McDonaldâ€™s confirmed â€“ that itâ€™s prepared in a Vegan-friendly way, too.

â€œThe meat is cooked on a separate grill and used with separate tongs to avoid cross contamination with meat and dairy products,â€ said a spokesperson, who added that the fries supplied are also vegan, not just because theyâ€™re made from potatoes â€“ â€œobvs!â€ â€“ but because they are cooked with sunflower and rapeseed oil in dedicated vats, separate from any animal products.

McDonaldâ€™s says it plans to roll them the McPlant nationwide by January. In the meantime, four (mostly) veggies from the newsroom got stuck in to give us their verdicts below.

â€œIâ€™ve been vegetarian for around 18 months now, and truly the only thing I get misty-eyed over when it comes to meat is the thought of biting into a quarter-pounder with cheese. So when McDonaldâ€™s announced their McPlant burger, I had high hopes â€“ and Iâ€™m relieved to say theyâ€™ve been met.

â€œThe McPlant is not something Iâ€™d advise for anyone whoâ€™s after a gourmet burger experience. This is very much a business-as-usual McDonaldâ€™s burger that just happens to be plant-based, but if thatâ€™s what youâ€™re after then the McPlant truly delivers. The mix of sauces and that slightly dubious lettuce-gherkin combo give the full Maccies experience, and while it could be improved by seasoning it as they would a quarter-pounder, the patty is a Beyond Meat burger so itâ€™s actually a bit fancier than the standard McDonaldâ€™s single.

â€œIf youâ€™re after something quick, easy and vegan, this is definitely sufficient. Nuggets and milkshakes next, please!â€ â€“ Daniel Welsh, entertainment editor

â€œGoing into this taste-test with low expectations, Iâ€™m pleasantly surprised by the McPlant burger. The sauciness and juiciness of the burger especially impresses â€“ a factor that sometimes disappoints with fast food. The vegan cheese is nicer than expected too, the flavour not to strong or overpowering. And while gherkins split opinions, for me they were the cherry on top (of the burger).

â€œI follow a halal diet, meaning I often go plant-based. As a meatless option, Iâ€™d be happy going to McDonaldâ€™s again for one of these, but it sits lower in my rankings than the more gourmet vegan options on the market. And when it comes to fast food vegan burgers, sorry to say, Maccies, but KFC gets my number one spot.â€ â€“ Nabihah Parkar, audience engagement reporter

â€˜A good option, if not a game-changerâ€™

â€œThis burger might be vegan, but itâ€™s still designed to be eaten after a night out. While not the most jaw-dropping on the market, itâ€™s probably the best herbivore option you can find after 3am, smelling delicious and looking pretty appealing.

â€œOnce I start tucking in, I find the actual â€˜burgerâ€™ part isnâ€™t dry at all, as some veggie products can be, but flavoursome with a slightly meaty texture. The cheese, being vegan too, obviously doesnâ€™t melt, yet it brings the whole burger together. With mayo, fresh lettuce, tomatoes and some gherkins, this burger is the sort of meal McDonaldâ€™s is famous for: tasty and quick.

â€œIâ€™m a veggie, but probably (accidentally) vegan about three days a week. If youâ€™re wanting to indulge while all your carnivorous mates are going for a meal, this would be a great option â€“ but if you are trying to convince someone to become a long-term vegan or veggie, this probably isnâ€™t quite the game-changer youâ€™re looking for.â€ â€“ Kate Nicholson, senior trends reporter

â€˜Mcdonaldâ€™s is late to the vegan gameâ€™

â€œIâ€™m a vegetarian, but have mixed thoughts about this burger. It starts well: looking and smelling like an authentic Maccies. The patty tastes pretty good, the lettuce is fresh, and it had a surprisingly decent amount of sauce. My problem is that McDonalds is pretty late to the vegan game here, so I expected this to have more shine than the others Iâ€™ve tried. Is it a good attempt? Sure. But would I rush back? Only if they brought out vegan McNuggets.â€ â€“ Sarah Dear, international audience analyst