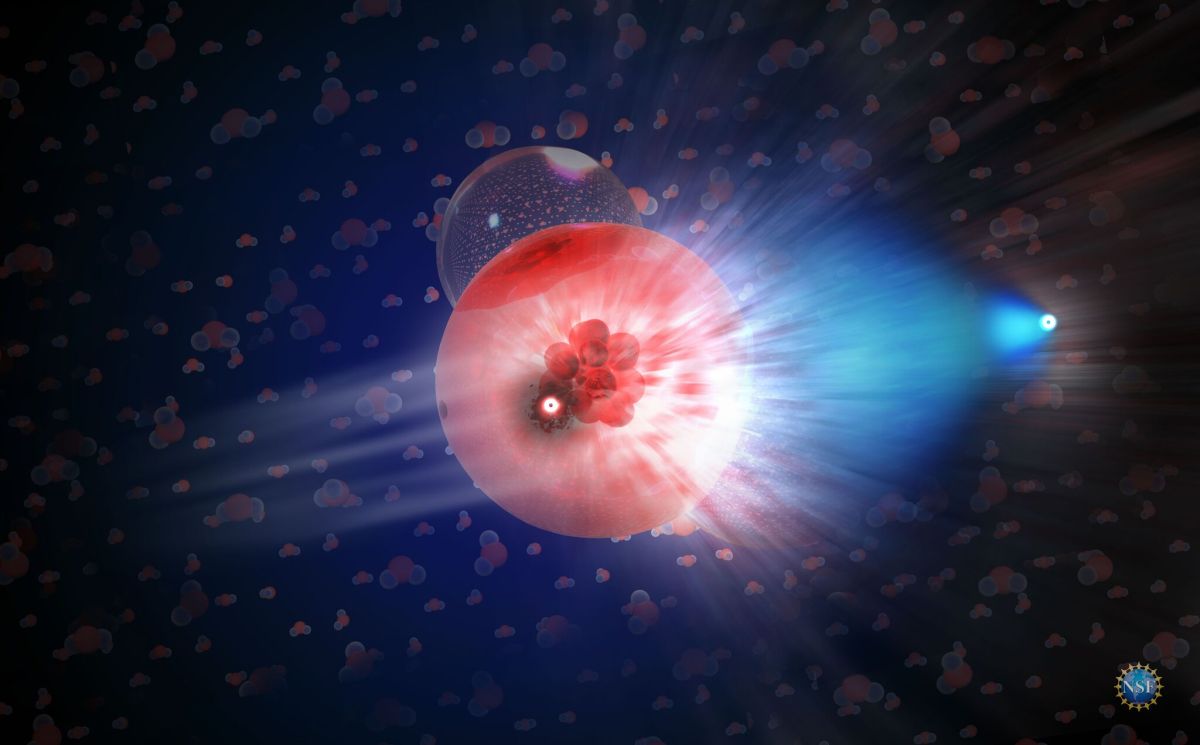 Paul M. Sutter is an astrophysicist at SUNY Stony Brook and the Flatiron Institute, host of “Ask a Spaceman” and “Space Radio,” and author of “How to Die in Space.” Sutter contributed this article to Space.com’s Expert Voices: Op-Ed & Insights.

The universe is a pretty busy place, with stars blowing up, black holes consuming material and high-energy radiation galore. Some of these events show up on Earth as high-energy neutrinos, ghostly particles that hardly ever interact with normal matter. Still others show up as fast radio bursts (FRBs), which are brief but intense flashes of radio energy.

Astronomers don’t know the source of the highest-energy neutrinos, and the origins of FRBs are also poorly understood. Knowing if neutrinos and FRBs came from the same place on the sky would help explain the origins of both.

But alas, that’s not the case, as new research throws a wet blanket on hopes of a connection.

Related: Where did all the baryons go?

Neutrinos are some of the most common particles in the universe. Indeed, as you read this, a few trillion are passing through your body every second. But not only are they the lightest of all known particles, they also hardly ever interact with normal matter.Â

It takes some of our biggest instruments to detect neutrinos. And I mean big, like the IceCube array in Antarctica. Located near the geographic South Pole, the IceCube facility consists of dozens of strands of detectors sunk into the ice sheet. When the rare neutrino collides with a water molecule, it produces a flash of light that the detectors see.

Between 2008 and 2018, the IceCube team reported over 11 million neutrino strikes. The vast majority were of relatively low energy, but a small fraction had incredibly high energies â€” some of the highest energies ever recorded in any particle.

Those neutrinos seem to come from all over the sky, indicating that they have extragalactic origins. (Otherwise, they would tend to stay within the plane of the Milky Way.) Because neutrinos don’t really interact with anything else, they travel in straight lines, meaning the direction they come from is truly the direction of their origins (unlike their cousins, cosmic rays, which get deflected by magnetic fields).

Despite those millions of detections, the highest-energy neutrinos don’t appear to be correlated with a particular kind of galaxy or location on the sky. Surely, some high-energy process is generating them, but it’s not clear exactly what that is.

Related: Tracing a neutrino to its source: The discovery in pictures

The fastest burst in the West

FRBs are truly mysterious. First detected in 2007, they represent some of the most intense processes in the universe, capable of dumping an enormous amount of energy into the radio spectrum, with the events themselves lasting no more than a second. The Canadian Hydrogen Intensity Mapping Experiment (CHIME) collaboration has produced a catalog of nearly 500 FRBs, of which only 18 have repeated themselves.

Recently, astronomers spotted a connection between an FRB event and a magnetar â€” a highly magnetized, rapidly spinning neutron star â€” pointing to a potential origin. But that’s only a single observation, and we need a lot more work to uncover the origin of all FRBs.

Put simply, it would be really awesome if FRBs came from the same places on the sky as high-energy neutrinos. Because we don’t fully understand the ultimate sources of either, a correlation would be a massive clue. For example, if magnetars are truly the source of all FRBs, and high-energy neutrinos came from the same direction, that would be strong evidence that magnetars are responsible for producing high-energy-neutrino events as well.

Too bad they don’t, though. In a paper published recently in the preprint database arXiv, Shantanu Desai, an astronomer at the Indian Institute of Technology Hyderabad, examined the relationship between the millions of neutrinos and hundreds of FRBs available in public catalogs.

Desai found a large number of coincidental sources, where an FRB was within 3 degrees of a neutrino. (The 3 degrees is arbitrary â€” but it is close to the uncertainty of the measurements, so it reasonably qualifies as “nearby.”) Desai then compared that number to the number of FRBs that had no associated neutrino companion.

It appeared that FRBs were no more likely to be near a high-energy neutrino than far from one, indicating that there’s no correlation.

That means that whatever is generating FRBs is unlikely to be the same process that generates high-energy neutrinos. It also means astronomers have a lot more work to do.