The Very Real Effort to Track Killer Asteroids and Comets 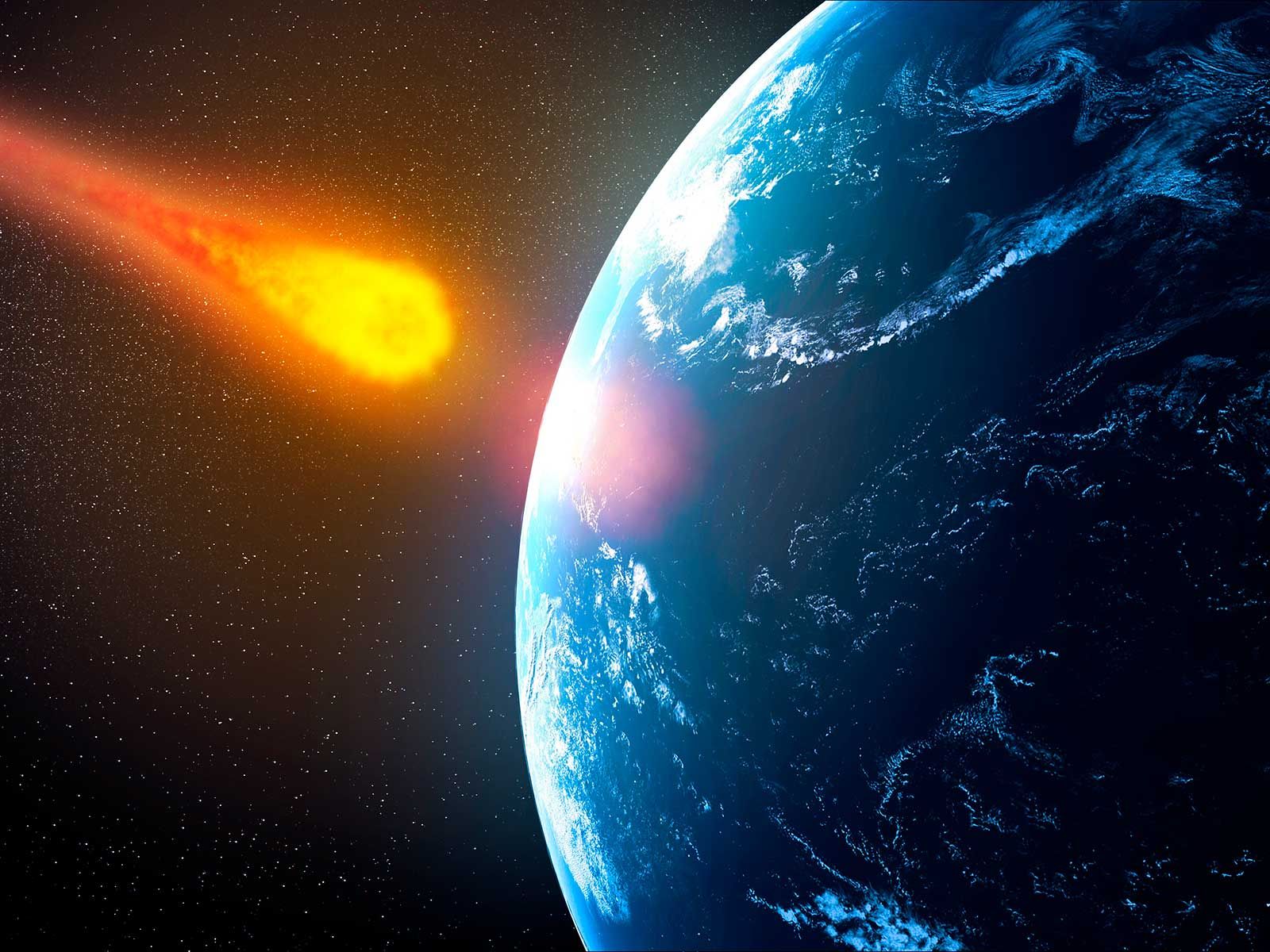 Itâ€™s not a question of if but when: Eventually, astronomers will discover a celestial object on an Earth-bound trajectory. It might be an asteroidâ€“a big chunk of rock, orbiting the sun in the inner part of the solar systemâ€“or it might be a comet, containing ice as well as rock, and typically moving in a slower, more oval-shaped orbit. To be very clear, no asteroids or comets are currently known to present any danger. Nonetheless, it pays to be prepared, given the devastation that such an impact would bring.

â€œEven a relatively small asteroid, say 150 meters across [about 500 feet] could take out a major city,â€ says Leslie Looney, an astronomer at the University of Illinois, Urbana-Champaign.

The drama of such a cosmic collision hasnâ€™t been lost on Hollywood, whose latest offering on the subject, Donâ€™t Look Up, involves an Earth-bound killer comet. The darkly comedic satire from the mind of Adam McKay, the writer and director of The Big Short and Vice, hits theaters on December 10 and comes to Netflix on December 24. Those who remember 1998 may recall over-the-top fare like Armageddon, or the somewhat more scientifically plausible Deep Impact, which shared a broadly similar doomsday premise.

For Hollywood, wayward comets and asteroids are plot devices, but astronomers and physicists take the threat very seriously. Scientists have considered a number of strategies for dealing with such an object, if one were detected. In fact, NASAâ€™s DART mission (Double Asteroid Redirection Test), which launched on November 23, is the first spacecraft designed to ram into an asteroid to see how the objectâ€™s orbit is affected.

Next fall, the DART spacecraft, about the size of a vending machine, will reach Didymos and Dimorphos, a double asteroid system that revolves around the sun between the orbits of Earth and Mars (though at its furthest, it actually lies a tad beyond the Red Planet). The spacecraft will target Dimorphos, the smaller of the two at about 525 feet across (a bit wider than the largest of the Egyptian pyramids). The impact is predicted to alter the objectâ€™s orbit slightly, making it spin just a bit faster around Didymos. The whole affair will be closely monitored by a small satellite travelling alongside DART, and by telescopes on Earth.

If an object the size of Dimorphos were to hit us, it would be â€œa bad day for whichever part of the world it landed on,â€ says Andy Rivkin, a planetary astronomer at Johns Hopkins Universityâ€™s Applied Physics Laboratory in Maryland and a co-lead investigator for the DART mission. He notes that neither Didymos nor Dimorphos have any chance of actually hitting us in the foreseeable future, and that this is just a test. But objects the size of Dimorphos do strike the Earth about once every 20,000 years, on average. Over the course of our planetâ€™s history, evidence of major impacts is plentiful. The impact that blasted out the Tenoumer crater in Mauritania may be one of the â€œnewestâ€; itâ€™s thought to be between 10,000 and 30,000 years old.

Smaller objects hit the Earth more frequently. The meteor that exploded above the Russian city of Chelyabinsk in 2013 is thought to have been about 66 feet across; astronomers believe an object of that size hits our planet about once per century. A larger explosion, known as the Tunguska event, rocked eastern Siberia in 1908, when a meteor 160 to 200 feet in diameter struck the atmosphere at a steep angle. The blast, which is thought to have been on par with the largest hydrogen bombs ever tested, created a shock wave that flattened trees over hundreds of square miles. The event may have caused several deaths (accurate records from the time are lacking); were a similar-sized object to strike a major city today, it would likely kill millions. In prehistoric times, far more severe impacts occurred; most famously, a comet or asteroid thought to be six to nine miles across hit the Earth about 66 million years ago, killing off the dinosaurs and three-quarters of all plant and animal species.

The good news is that the larger such an object is, the easier it is to detect, which means humanity would have more time to prepare. (The Chelyabinsk object could in principle have been spotted ahead of time, but it happened to come toward us from roughly the same direction as the sun; because professional telescopes canâ€™t be aimed close to the sun, the object arrived undetected.)

Among possible Earth-defense strategies, Rivkin feels that the deflection method, which DART will be testing, is the most promising approach. With adequate advance warning, even a small adjustment to the orbit of an Earth-bound object would be enough to cause it to miss our planet altogether.

Various alternatives are also on the table. Philip Lubin, a physicist at the University of California, Santa Barbara, has argued that blowing up an inbound object could be as effective as trying to re-route it, depending on the size of the object, the lead time and other factors. â€œIf you do it rightâ€”keep the fragments below 10 to 15 meters [33 to 50 feet]â€”no oneâ€™s going to die,â€ Lubin says. The impacts from the fragments â€œmight break a few windows… You turn what would have killed several million people into a fireworks display.â€ He stresses that thereâ€™s nothing wrong with the deflection method; itâ€™s just that in some cases the â€œpulverizeâ€ option, as he puts it, may be more effective.

And then thereâ€™s the â€œgravity tractorâ€ method, which despite its technical sounding name is actually very simple. It involves positioning a spacecraft near the incoming object so that the craftâ€™s gravitational pull alters the objectâ€™s trajectory. Rivkin is drawn to the simplicity of the gravity tractor idea. â€œYou can control the spacecraft, and use it to â€˜tugâ€™ the asteroid into a different orbit,â€ he says. But he cautions that this would be a slow process and might require â€œthe better part of a centuryâ€ to sufficiently shift the objectâ€™s orbit.

Meanwhile, a small group of researchers spend their days tracking near-Earth objects (NEOs)â€”the term astronomers use for any small solar system body whose orbit brings it within about 120 million miles of the sun (the Earth orbits at 93 million miles). They work at institutions like the Jet Propulsion Laboratoryâ€™s Center for NEO Studies (CNEOS), and at the Minor Planet Center, affiliated with the Harvard-Smithsonian Center for Astrophysics in Cambridge, Massachusetts. Theyâ€™re particularly concerned with PHAs (potentially hazardous objects), the term for bodies about 460 feet or more across whose orbits bring them within about five million miles of Earth. Paul Chodas, manager of CNEOS, estimates about 25,000 PHAs exist, of which 40 percent have been found so far. (He notes that only a small percentage of potentially dangerous objects are comets; most are asteroids.) Because larger objects are much easier to find, itâ€™s likely that the vast majority of the undiscovered objects are small. â€œYouâ€™ll be pleased to know that there are no large asteroids that have any significant chance of hitting the Earth within the next 100 years,â€ he says.

Several ground-based telescopes are dedicated to the search for these objects, including three instruments used by the NASA-funded Catalina Sky Survey, based in Arizona, and the PanSTARRS telescope in Hawaii. A space-based telescope, the NEO Surveyor mission, is in the preliminary design phase; it will scan the inner solar system for potentially dangerous objects. Though not primarily tasked to search for such bodies, the Rubin Observatory, under construction in Chile, is also expected to detect thousands of asteroids and comets.

Chodas notes that the sheer scale of the solar system works to humanityâ€™s advantage. â€œSpace is really big, and the Earth is really tiny,â€ he says, â€œso the odds of a sizeable asteroid actually hitting the Earth are very, very small.â€

While few scientists lose sleep over the threat of a cosmic collision, many feel that detection programs, and missions like DART, are a good investment as a kind of planetary insurance policy. â€œIn the long term, itâ€™s a real concern,â€ says Looney.

Of course, itâ€™s not humanityâ€™s only concernâ€”or even necessarily its most urgent one. While Donâ€™t Look Up is, on the surface, about an impending cosmic collision, the film is also a thinly veiled allegory about another existential threat: climate change. As McKay told reporters recently: â€œWe wanted to deal with this subject, the climate crisis, which is so overwhelming, and itâ€™s arguably the greatest threat to life in the history of mankind.â€

Many astronomers, including Chodas, agree. Though he spends his days tracking threats from above, he says â€œthe asteroid risk is actually smaller than many of the other risks weâ€™re faced with.â€