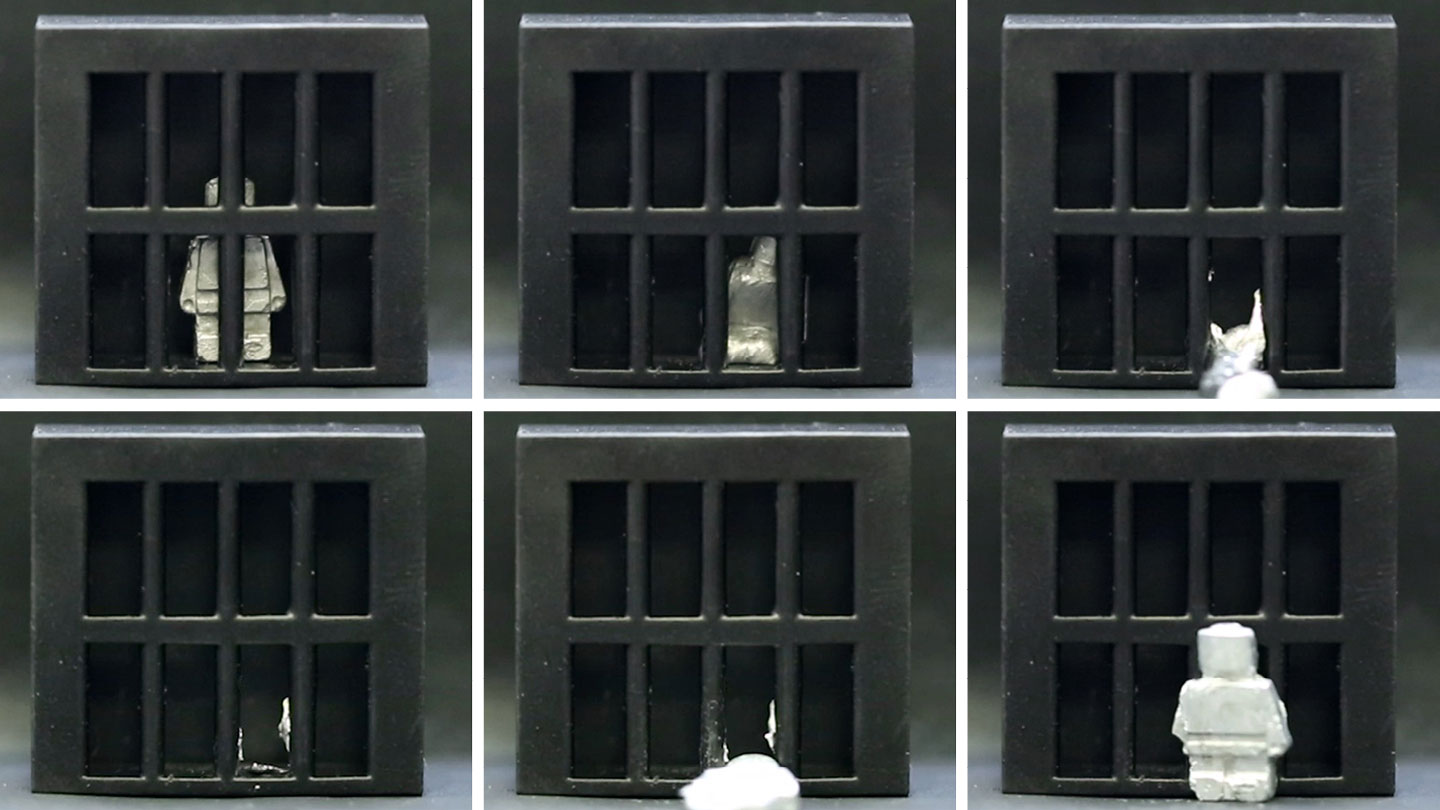 Shape-shifting liquid metal robots might not be limited to science fiction anymore.

Miniature machines can switch from solid to liquid and back again to squeeze into tight spaces and perform tasks like soldering a circuit board, researchers report January 25 in Matter.

This phase-shifting property, which can be controlled remotely with a magnetic field, is thanks to the metal gallium. Researchers embedded the metal with magnetic particles to direct the metal’s movements with magnets. This new material could help scientists develop soft, flexible robots that can shimmy through narrow passages and be guided externally.

Science News headlines, in your inbox

Headlines and summaries of the latest Science News articles, delivered to your email inbox every Thursday.

Scientists have been developing magnetically controlled soft robots for years. Most existing materials for these bots are made of either stretchy but solid materials, which can’t pass through the narrowest of spaces, or magnetic liquids, which are fluid but unable to carry heavy objects (SN: 7/18/19).

In the new study, researchers blended both approaches after finding inspiration from nature (SN: 3/3/21). Sea cucumbers, for instance, “can very rapidly and reversibly change their stiffness,” says mechanical engineer Carmel Majidi of Carnegie Mellon University in Pittsburgh. “The challenge for us as engineers is to mimic that in the soft materials systems.”

So the team turned to gallium, a metal that melts at about 30° Celsius — slightly above room temperature. Rather than connecting a heater to a chunk of the metal to change its state, the researchers expose it to a rapidly changing magnetic field to liquefy it. The alternating magnetic field generates electricity within the gallium, causing it to heat up and melt. The material resolidifies when left to cool to room temperature.

Since magnetic particles are sprinkled throughout the gallium, a permanent magnet can drag it around. In solid form, a magnet can move the material at a speed of about 1.5 meters per second. The upgraded gallium can also carry about 10,000 times its weight.

External magnets can still manipulate the liquid form, making it stretch, split and merge. But controlling the fluid’s movement is more challenging, because the particles in the gallium can freely rotate and have unaligned magnetic poles as a result of melting. Because of their various orientations, the particles move in different directions in response to a magnet.

Majidi and colleagues tested their strategy in tiny machines that performed different tasks. In a demonstration straight out of the movie Terminator 2, a toy person escaped a jail cell by melting through the bars and resolidifying in its original form using a mold placed just outside the bars.

Get great science journalism, from the most trusted source, delivered to your doorstep.

On the more practical side, one machine removed a small ball from a model human stomach by melting slightly to wrap itself around the foreign object before exiting the organ. But gallium on its own would turn to goo inside a real human body, since the metal is a liquid at body temperature, about 37° C. A few more metals, such as bismuth and tin, would be added to the gallium in biomedical applications to raise the material’s melting point, the authors say. In another demonstration, the material liquefied and rehardened to solder a circuit board.

Although this phase-shifting material is a big step in the field, questions remain about its biomedical applications, says biomedical engineer Amir Jafari of the University of North Texas in Denton, who was not involved in the work. One big challenge, he says, is precisely controlling magnetic forces inside the human body that are generated from an external device.

“It’s a compelling tool,” says robotics engineer Nicholas Bira of Harvard University, who was also not involved in the study. But, he adds, scientists who study soft robotics are constantly creating new materials.

“The true innovation to come lies in combining these different innovative materials.”