Thirteen things we learned from Harry and Meghan’s Netflix series

Here are some of the key takeaways from the first three parts:

The couple talked about how they first met on social media.

“Meg and I had met through Instagram. I was scrolling through my feed. Someone who was a friend had this video of the two of them with the like Snapchat thing … like dog ears.”

Meghan said she looked through his feed, before the pair got each other’s numbers.

Harry turned up late to the pair’s first date in Soho, London, in July 2016.

Meghan said: “You were late and I couldn’t understand why he would be late. But he kept texting saying, ‘I’m in traffic, I’m so sorry.'”

Harry recalled: “I was panicking, I was freaking out. I started sweating.”

Unaware of this, Meghan began to doubt that the date would go anywhere, thinking he might have an “ego”.

But when he eventually showed up he was profusely apologetic, which Meghan described as “so sweet,” adding: “You were genuinely so embarrassed.”

Meghan added: “He was just so fun. Just so refreshingly fun and that was the thing we were like childlike together.”

They arranged to meet again the following night.

“This girl, this woman, is amazing. She’s everything I’ve been looking for.” 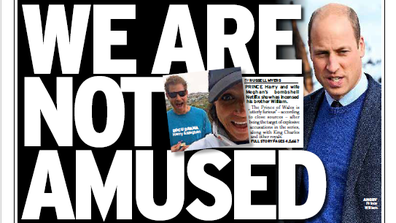 The couple described how their relationship was cemented in Africa, when Meghan travelled to join Harry on a visit to Botswana in August 2016 – having only met him twice before.

“We had to get to know each other before the rest of the world and before the media joined in,” said Harry.

They spoke of living in close quarters with the bare minimum and how they were still so unsure of how the relationship would develop.

Harry spoke at length about the media’s ever-present role in his family life, starting with footage taken outside the hospital following his birth.

Of the ongoing attention throughout his childhood, he said: “The majority of my memories are of being swamped by paparazzi.”

He recalled learning as a young child how to handle the attention, saying: “Within the family, within the system, the advice that’s always given is ‘don’t react. Don’t feed into it.'”

“My mum did such a good job in trying to protect us. She took it upon herself to basically confront these people.”

Footage of family ski holidays was included to highlight this.

In one clip, Harry is seen alongside his brother Prince William and cousins Princesses Beatrice and Eugenie as they are made to pose for the crowd of photographers, in an unwritten agreement that would ultimately allow them privacy later in the holiday.

But that was followed by another more intrusive clip which led to his mother confronting the photographer.

‘Pain and suffering’ of women marrying into royal family

Harry brought up the now-discredited 1995 Panorama interview with his mother, Princess Diana.

He said: “My mother was harassed throughout her life with my dad but after they separated the harassment went to new levels.”

The “moment she left the institution” left her “completely exposed”, he said.

Growing up, he witnessed “pain and suffering of women marrying into this institution”.

He added: “What happened to my mum … I didn’t want history to repeat itself.”

In a telling section on his experience of other royal marriages, Harry said: “I think for so many people in the family, especially the men, there can be a temptation or an urge to marry someone who would fit the mould, as opposed to somebody who you perhaps are destined to be with.

“The difference between making decisions with your head or your heart.

“And my mum certainly made most of her decisions, if not all of them, from her heart. And I am my mother’s son.”

Harry spoke about ways Meghan is similar to his mother, Diana, who died when he was 12 years old.

“I accept that there will be people around the world who fundamentally disagree with what I’ve done and how I’ve done it.

“But I knew that I had to do everything I could to protect my family, especially after what happened to my mum.”

In her first extensive public comments, Meghan’s mother Doria Ragland spoke about her first time meeting Harry, as well as her fears for her safety and regrets as a parent.

She also described the last five years as “challenging”.

“He was 6’1″, a handsome man with red hair, really great manners. He was just really nice. And they looked really happy together. Yeah, like he was the one,” she said.

Describing the early years of her daughter’s childhood, Ragland – who is African American – recalled repeatedly being asked if she was the nanny as her daughter’s skin was lighter.

Her mother said: “As a parent, in hindsight I would absolutely like to go back and have that very real conversation about how the world sees you.”

When Meghan began to face negative media attention, Ragland recalled telling her daughter “this is about race,” with Meghan replying: “Mummy, I don’t want to hear that.”

After news of their relationship broke, Meghan recalled how quickly she became the focus of photographers and the media.

The royal family regarded such intrusion almost as a workplace hazard, according to Harry.

“As far as a lot of the family were concerned, everything that she was being put through, they had been put through as well,” Harry said.

“So it was almost like a rite of passage. Some of the members of the family were like ‘right, but my wife had to go through that, so why should your girlfriend be treated any differently?’

“‘Why should you get special treatment? Why should she be protected?’

“I said the difference here is the race element.”

Formalities, and meeting William and Catherine

Oblivious to royal protocol, she said she was “barefoot” and wearing ripped jeans at the time.

She described herself as a “hugger”, but said that this can be “jarring” for some British people.

“I guess I started to understand very quickly that the formality on the outside carried through on the inside,” she said.

“That formality carries over on both sides, and that was surprising to me.”

First meeting with the Queen

Harry said that his grandmother, Queen Elizabeth II, was the first senior member of the royal family to meet Meghan.

Meghan recalled being told that she would have to curtsy, while Harry said: “How do you explain that you bow to your grandmother? And that you all need to curtsy. Especially to an American. That’s weird.”

He went on to say that members of his family were “incredibly impressed”, though were uncertain about the difference in their backgrounds and thought that her being a Hollywood actress meant “this won’t last”.

“There was a big idea of what that looks like from the UK standpoint. Hollywood – it was very easy for them to typecast that.”

In contrast to Meghan’s experiences growing up mixed race, Harry said that there was a “huge level” of unconscious bias in the royal family.

“The thing with unconscious bias is actually no one’s fault, but once it’s been pointed out or identified within yourself, you then need to make it right,” he said.

Harry even addressed the time when he wore a Nazi uniform to a private party in 2005, saying it was one of the “biggest mistakes” of his life, adding that he felt “so ashamed afterwards”.

The duchess discussed her estrangement from her father following a controversy over whether he staged a series of paparazzi-style photographs in the lead-up to their 2018 wedding.

Harry described the situation with his father-in-law as “incredibly sad”.

“I shouldered that because if Meg wasn’t with me then her dad would still be her dad,” he said.

Meghan opened up about her half-sister Samantha Markle, who she said she hadn’t seen since her early twenties but who frequently spoke of her in the media.

Nine, the publisher of this website, is the owner of streaming service Stan.﻿