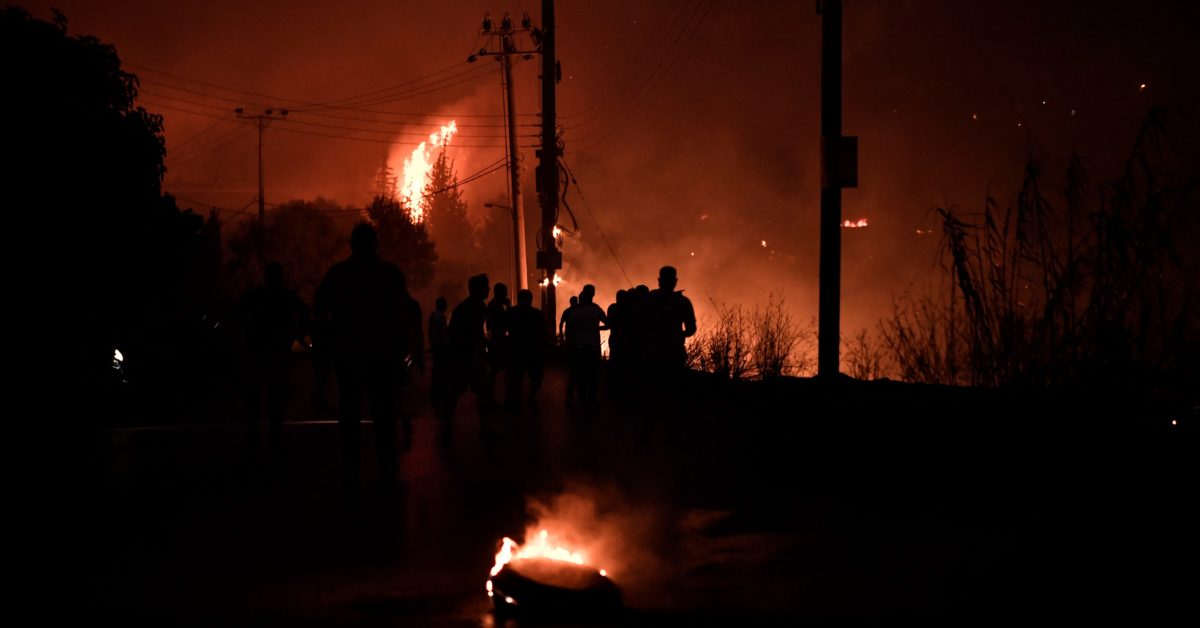 Thousands were forced to evacuate from their homes in the suburbs north of Athens Tuesday, as wildfires engulfed the outskirts of the Greek capital and continued to rage uncontrolled amid the country’s worst heatwave in over 30 years.

As locals left the suburbs of Varibobi, Adames and Thrakomakedones, more than 500 firefighters were still battling the flames late Tuesday night, assisted by helicopters and other aircraft. The total damage is still unclear.

Seven people were transferred to hospital with breathing problems, but no severe injuries have been reported so far. A huge black cloud of thick smoke also loomed over Athens itself.

Countries across Southern Europe are grappling with high temperatures and fire risks in one of the Continent’s worst heat waves in decades as experts warn about the impacts of climate change. In Greece, Tuesday was the hottest day of a prolonged heat wave that started last Wednesday â€” the worst the country has faced since 1987, when more than 1,000 people died in Athens.

The current forest fire near Athens is the largest and most dangerous of the 81 blazes that have broken out around the country in the past 24 hours with active flames remaining on 40 fronts, Deputy Civil Protection Minister Nikos Hardalias said during a public briefing late on Tuesday. Firefighters had battled another 116 fires over the weekend, according to Hardalias’ ministry.

â€œWe continue to fight hour by hour, with our top priority being to save human lives,â€ Hardalias said. â€œWe will do so all night.â€

The fire is thought to have started after 1 p.m. local time in the forested area of Kryoneri and spread rapidly throughout the afternoon. Flames have damaged parts of the power grid in Athens, posing a major risk to the electricity supply in the region.

Greek basketball star Giannis Antetokounmpo canceled an event he had planned in Athens to celebrate the NBA championship he won recently with the Milwaukee Bucks in the U.S.

â€œWe hope there are no victims from these fires, and of course we will postpone todayâ€™s celebration,â€ Antetokounmpo wrote on Twitter.

Hundreds of residents and holidaymakers were also evacuated from six villages on the western island of Evia due to a wildfire in Limni.

â€œUnfortunately, the ecological disaster is already enormous as the fire is reducing a unique virgin pine forest to ashes,â€ said Central Greece’s regional governor, Fanis Spanos, calling for a state of emergency to be declared for Limni.