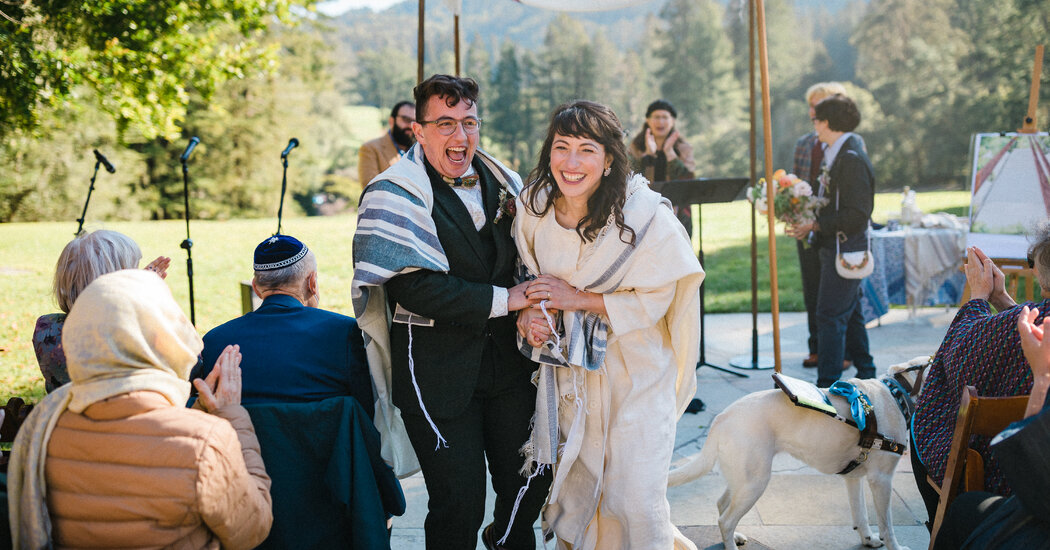 Frankie Sandmel met Elaina Marshalek in January 2017 while the two were at a retreat for Jewish activists in Berkeley, Calif.

After pairing up for a get-to-know-you exercise, Ms. Marshalek, 31, said â€œthere was definitely a sparkâ€ between her and Mx. Sandmel, who uses a gender neutral courtesy title. But before they could explore it, Mx. Sandmel, 31, returned to Chicago and Ms. Marshalek to her home in Berkeley.

Six months later, they reconnected at a Queer Talmud Camp hosted by Svara, an organization that focuses on studying Jewish texts through a queer lens. While there, the spark between them grew into a full-fledged romance.

â€œThere was a lot of flirting that week,â€ said Mx. Sandmel. At a dance party on the last night of the five-day camp, the pair shared their first kiss. By the time they left, they were a couple.

Two weeks later, they temporarily reunited when Ms. Marshalek attended another retreat in Boston, where Mx. Sandmel had recently moved to begin rabbinical school at Hebrew College. Before long, though, Mx. Sandmelâ€™s studies became too consuming and the couple broke off their long-distance relationship in November 2017.

The next year, as summer approached, Mx. Sandmel and Ms. Marshalek signed up to attend another installment of Svaraâ€™s Queer Talmud Camp without telling one another. When each learned the other had enrolled on the first day, the two decided they would be a camp couple and leave the rest to be figured out later.

This time, when distance forced them to part, Mx. Sandmel and Ms. Marshalek figured out how to stay together. They began to split their time between Boston and Berkeley, an arrangement they plan to continue until Mx. Sandmel is ordained as a rabbi this spring.

â€œFrankieâ€™s heart is bottomless,â€ said Ms. Marshalek, who added that she knew Mx. Sandmel was â€œthe one the whole time, even though that feeling of knowing, to me, rationally, sounds bananas.â€

Mx. Sandmel, who grew up mostly in the Chicago area, graduated from Macalester College. Ms. Marshalek is from San Mateo, Calif., and graduated from the University of California, Berkeley, where she received a masterâ€™s degree in engineering. She is currently the director of programs at Svara, where she started working in February 2021.

The two became engaged in the summer of 2021, and celebrated the occasion with a pair of events. That July, they held an engagement party in Oakland, Calif. Beforehand, Mx. Sandmel secretly asked guests to bring rings or candy rings that they could present to Ms. Marshalek throughout the festivities. A month later, the couple visited Mx. Sandmelâ€™s parents house in Portland, Maine. While there, Ms. Marshalek gave Mx. Sandmel a financier, Mx. Sandmelâ€™s favorite cookie, with a ring in it.

They were married Jan. 2 outside of the Brazilian Room, a venue on the grounds of Tilden Regional Park in Berkeley. Julie Batz, a lay cantor and Svara faculty member, who is also a Universal Life Church minister, officiated. Both Mx. Sandmelâ€™s and Ms. Marshalekâ€™s parents were among the 99 vaccinated guests in attendance, all of whom were asked to take PCR and rapid Covid tests ahead of the entirely outdoor event.

At a reception that followed, Saul Goodmanâ€™s Klezmer Band provided entertainment for the couple and their guests, many of whom also took turns leading niguns, traditional Jewish songs that are wordless. The celebration, said Mx. Sandmel, was â€œvery traditionally Jewish, but also extremely queer.â€