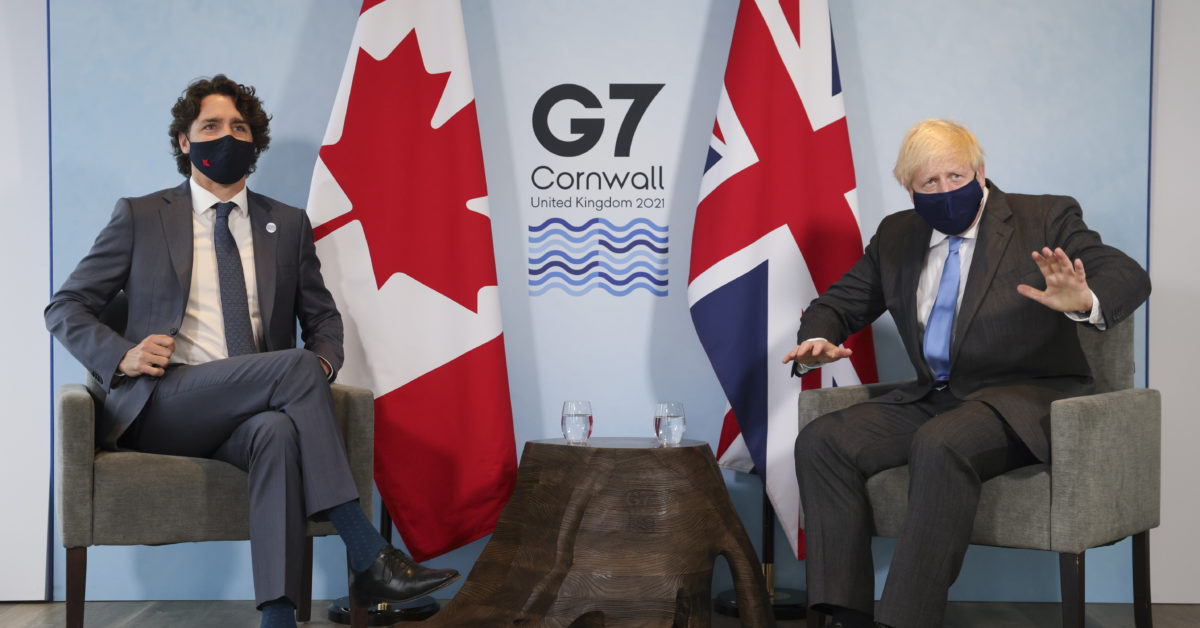 FALMOUTH, England â€” If Boris Johnson was hoping to move on from questions about Northern Ireland at the G7, things are not quite going his way.

The U.K. prime minister’s team breathed a sigh of relief Thursday after widely trailed concerns from Washington about the future of the Northern Ireland protocol, a key part of his country’s Brexit deal with the EU, did not scupper face-to-face talks with U.S. President Joe Biden.

Now, Canadian leader Justin Trudeau has entered the fray. He signaled to Johnson in their bilateral meeting Friday â€œthat we are very aware of the issue,â€ Ralph Goodale, Canadian high commissioner to the U.K., told reporters.Â

â€œThe Good Friday Agreement is obviously important from Canada’s point of view,â€ Goodale added. â€œWe know how complex those border issues are with respect to Ireland and Northern Ireland. We don’t underestimate the difficulty of finding a satisfactory resolution, but simply to signal we’re aware of it.â€

Canada is also very willing to help find a solution, Goodale said, pointing to his country’s involvement in the implementation of Northern Ireland’s 1998 peace accord. But, he stressed, Canada understands this is ultimately one for the U.K. to resolve.

The protocol is part of the divorce treaty the U.K. signed with the EU, but Britain is finding its trade terms too restrictive. Northern Ireland is part of U.K. territory in sovereignty and customs terms, but, under the protocol, it stays in the EUâ€™s single market.

Without an agreement covering animal and plant products, known as an SPS agreement, there will continue to be checks and limits in place on certain substances entering Northern Ireland from the mainland.

Asked if the U.K. hoped for a breakthrough at the summit, a Downing Street spokesman said: â€œThe prime minister was clear yesterday that this is not the forum in which he is necessarily seeking to come up with an immediate solution at the G7 though clearly he will want to discuss it with those that raise it with him.â€

â€œThey will want to talk about the the challenges that is bringing to the people of Northern Ireland and the risks it poses to the Good Friday Agreement in the current form of the protocol, and the need to find an urgent solutions.â€

The Canadian intervention comes after the U.S. was reported to have sent a sharp diplomatic reprimand to the U.K. about the situation ahead of the summit, and French President Emmanuel Macron warned any talk of renegotiating the trade mechanism was “not serious.”

Irish Prime Minister MicheÃ¡l Martin said Friday that Britain could still sign a trade deal with the U.S. even with an EU-U.K. SPS agreement, something the U.K. government is keen to avoid.

Johnson at least got some respite from the row in Friday’s itinerary, as officials from the British and Italian governments said Italian Prime Minister Mario Draghi had not raised it at their sit-down.