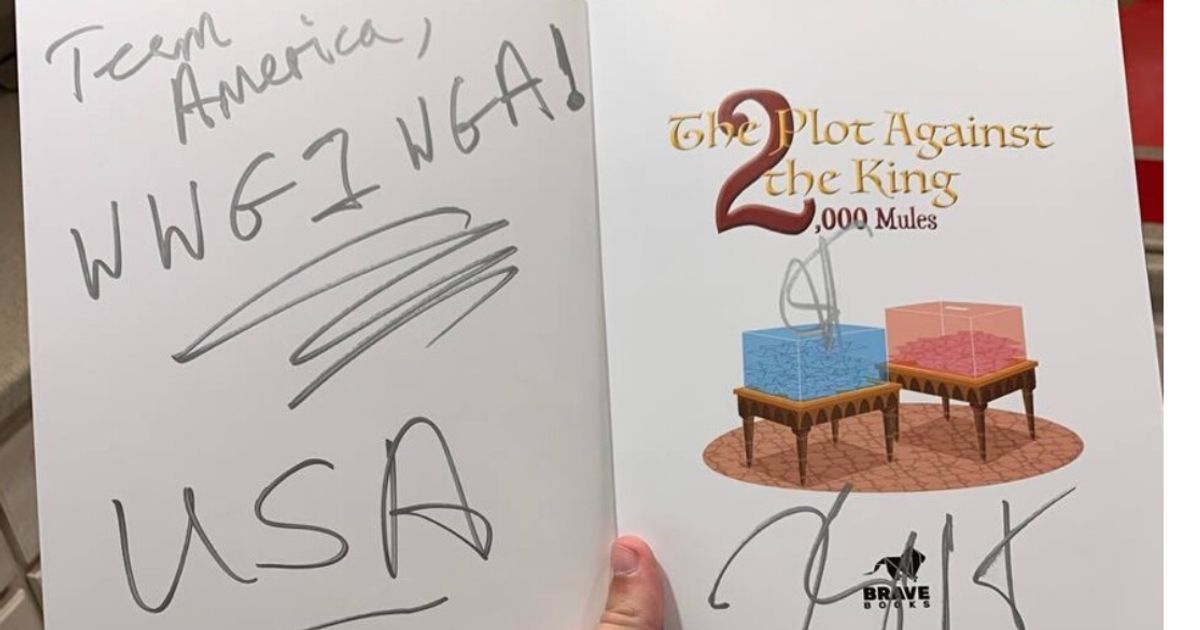 Devoted Donald Trump ally Kash Patel is pushing his children’s book about “King Donald” by featuring an autograph — and a hand-written QAnon salutation.

This is the same book, “The Plot Against the King” (a fractured fairy tale about Trump), that the former president has said he wants in “every classroom in America” — presumably without Patel’s QAnon greeting.

“Kash is signing books today, and he’s got a special message in 10 books for some lucky patriots,” Patel gushed Saturday on his “Plot” Truth Social account. (He also “retruthed” the message on his personal account.)

The “special massage,” enthusiastically underlined several times, is: “WWG1WGA!” — which is QAnon-speak for “Where We Go One We Go All.” It looks like Patel has made it out to “Teem America,” rather than “Team” America.

The WWG1 QAnon message is behind the stiff-armed salute with index finger pointing skyward that has sparked controversy at Trump rallies because it’s chillingly reminiscent of the “heil Hitler” salute.

Trump is increasingly espousing the crazed conspiracy plots of QAnon, and recently reposted an image of himself on Truth Social sporting a “Q” lapel pin and touting “WWG1WGA.”

Patel’s book features an evil plot involving mean “Hillary Queenton” and her “shifty knights” claiming that “King Donald” was working with the “Russionians” to cheat his way into the Oval Office. The king, however, comes out on top.

Patel, Trump’s hand-picked, short-time chief of staff for the acting secretary of the Defense Department, is the only other person who has publicly backed the former president’s claim that he had a “standing order” that any document removed from the White House would automatically be declassified. Trump baselessly told Sean Hannity in an interview earlier this week that he could even declassify documents merely by “thinking about it.”

Former White House chief of staff John Kelly has insisted that “nothing approaching an order that foolish was ever given.” Ex national security adviser John Bolton said Trump is “almost certainly” lying about declassifying records.