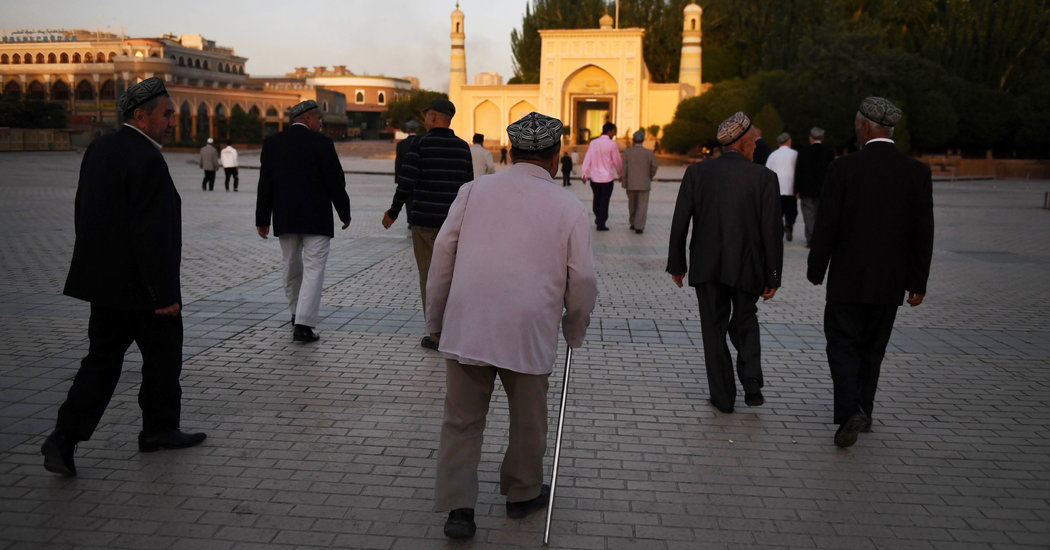 President Trump said he resisted punishing China for its mass internment of ethnic Uighurs last year for fear of jeopardizing trade talks with Beijing, a blunt admission of his transactional approach to human rights and willingness to subordinate other U.S. policy priorities to a potential trade deal he considers vital to his re-election.

In an interview with Axios published on Sunday, Mr. Trump was asked why he had not approved a Treasury Department plan in late 2018 to impose sanctions on Chinese government officials who were connected to the severe crackdown on Chinaâ€™s Uighurs and other Muslim minorities.

â€œWell, we were in the middle of a major trade deal,â€ Mr. Trump said.

â€œAnd when youâ€™re in the middle of a negotiation and then all of a sudden you start throwing additional sanctions on â€” weâ€™ve done a lot,â€ he added. â€œI put tariffs on China, which are far worse than any sanction you can think of.â€

Mr. Trump has taken a selective approach to human rights as president, imposing sanctions over rights abuses in countries he aims to intimidate, like Iran and Venezuela, while turning a largely blind eye when it comes to an ally like Saudi Arabia, or in the case of China, where he hopes to strike a trade deal. After he began to pursue a nuclear deal with North Korea, Mr. Trump abruptly dropped his criticisms of that countryâ€™s infamous human rights abuses.

His comment to Axios, part of an interview he gave Friday, appeared to support the account of his former national security adviser John R. Bolton, who writes in a new book that Mr. Trump asked him in December 2018 why administration officials were considering sanctions on Chinese officials over their treatment of the Uighurs.

Mr. Trump never approved the idea, and the issue was kept out of the trade talks entirely. And in a meeting several months later with President Xi Jinping of China, Mr. Bolton writes, â€œTrump said that Xi should go ahead with building the camps, which Trump thought was exactly the right thing to do.â€

U.S. officials and human rights groups say that China has placed up to one million Uighurs in indoctrination camps in the countryâ€™s northwestern Xinjiang region and turned the area into a dystopian surveillance state. Beijing has claimed that its policies are aimed at curbing extremism and that people in the camps, which it calls vocational training centers, are there voluntarily.

Chinese officials angrily challenge foreign criticism of their treatment of Uighurs as unacceptable interference in the countryâ€™s internal affairs. They lashed out at the United States last week after Mr. Trump, with little fanfare, signed legislation granting him new powers to impose sanctions on Chinese officials involved in the roundup of Uighurs.

Congress passed that measure this spring in large part to pressure Mr. Trump after he failed to take unilateral action already within his power.

As the scale of Chinaâ€™s crackdown became clear in 2018, officials at the Trump White House and the Treasury Department â€” with bipartisan support in Congress â€” discussed imposing sanctions on Chinese officials and companies with a hand in the crackdown on the Uighurs. But U.S. officials said last year that the idea was dropped to avoid interfering with what Mr. Trump has said could be â€œthe biggest deal ever made.â€

In a â€œPhase 1â€ trade deal signed in January, China made pledges to open up its financial sector, strengthen its protections of intellectual property and purchase $200 billion of additional American goods by the end of next year.

But the truce ushered in by that deal has been short-lived. In addition to rising tensions over a new security measure governing Hong Kong and the origin of the coronavirus, the pandemic has crushed consumer demand and disrupted supply chains, leaving those promised purchases lagging far behind targets.

While some of Mr. Trumpâ€™s advisers believe he has little to gain politically from scrapping his signature trade deal, the presidentâ€™s dissatisfaction with China is growing. That raises the question of whether the United States would challenge Chinaâ€™s compliance with the pact or take further action in retaliation for Beijingâ€™s crackdown on protesters in Hong Kong.

On Sunday, China temporarily suspended poultry imports from a U.S. slaughterhouse that had coronavirus cases among its workers, though the World Health Organization has found no evidence that the virus is transmitted through food.

In the interview with Axios, Mr. Trump also said he would â€œmaybe think aboutâ€ a meeting with the Venezuelan president, NicolÃ¡s Maduro, whom Mr. Trump has spent years trying to push from office. â€œMaduro would like to meet. And Iâ€™m never opposed to meetings â€” you know, rarely opposed to meetings,â€ Mr. Trump said.