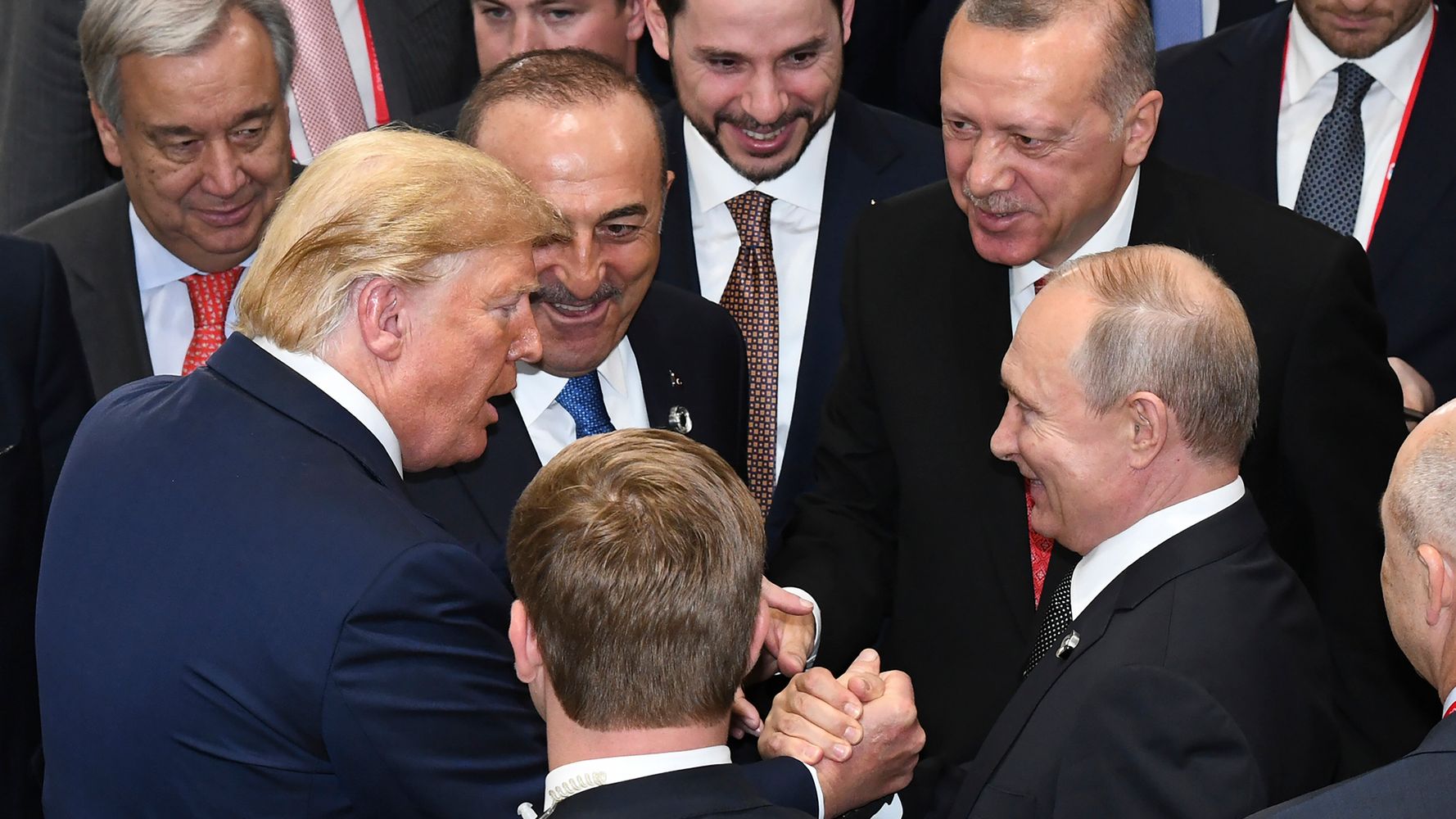 WASHINGTON (AP) â€” From the earliest days of his first presidential campaign, Donald Trump aggressively challenged the pillars of Republican foreign policy that defined the party since World War II.

He mocked John McCainâ€™s capture during the Vietnam War, validated autocrats with his platitudes, questioned longtime military and security alliances and embraced an isolationist worldview. And to the horror of many GOP leaders at the time, it worked, resonating with voters who believed, in part, that a bipartisan establishment in Washington had brokered trade deals that hurt American workers and recklessly stumbled into so-called â€œforever wars.â€

But Russiaâ€™s brutal invasion of Ukraine is posing a serious test for Trump and his â€œAmerica Firstâ€ doctrine at a moment when he is eyeing another presidential run and using this yearâ€™s midterm elections to keep bending the GOP to his will. Heâ€™s largely alone in his sustained praise of Russian President Vladimir Putin as â€œsmart,â€ an assessment he reiterated last week during speeches to donors and conservative activists. His often deferential vice president, Mike Pence, split with him on the issue late Friday.

The multinational partnerships that Trump repeatedly undermined, meanwhile, have allowed the West to quickly band together to hobble Russiaâ€™s economy with coordinated sanctions. The NATO alliance, which Trump once dismissed as â€œobsolete,â€ is flexing its strength as a foil to Russiaâ€™s aggression.

Perhaps most fundamentally, the war is a fresh reminder, observers say, that the U.S. canâ€™t simply ignore the worldâ€™s problems, even if thatâ€™s sometimes a politically appealing way to connect with voters facing their own daily struggles.

â€œThis is a brutal wake-up call to both parties that not only are we not going to be able to do less in the world,â€ said Richard Haass, the president of the Council on Foreign Relations and a former diplomat. â€œWe are going to have to do more.â€

While he argued that large elements of both parties have demonstrated a desire to turn inward, the current situation poses a â€œspecial problemâ€ for Republicans and the â€œAmerica firstersâ€ who have previously tried to paint Russia has a benign actor.

â€œThe entire thrust of America First, I would argue, was misguided in a world where what happens anywhere can and will affect us,â€ he said.

Itâ€™s unclear whether the Western unity that has taken hold against Russia can be sustained if the war escalates, expands beyond Ukraine or drags on indefinitely. And after two decades of U.S. foreign policy failures, including the Iraq War and the botched withdrawal from Afghanistan, many Americans are approaching the moment with caution.

On the eve of Russiaâ€™s invasion, just 26% of Americans said they supported the U.S. playing a major role in the conflict, according to a poll from The Associated Press-NORC Center for Public Affairs Research.

But the challenges to Trumpâ€™s approach to the world are clear.

Sweden and Finland have abandoned their long-held neutrality and warmed to the idea of joining NATO, expanding an alliance Trump continued to criticize this week. Germany, a country Trump spent years trying to browbeat into spending more on its defense, broke its longstanding post-World War II policy by sending anti-tank weapons and surface-to-air missiles to Ukraine and pledging to dramatically increase its defense budget.

Trump and his allies insist that Russia would never have invaded Ukraine were he still president. And Russia did not make aggressive moves on his watch, something former aides and others credit to his erratic behavior and direct threats that left world leaders uncertain of how Trump would respond to a provocation.

Roger Zakheim, the Washington director of the Ronald Reagan Presidential Foundation and Institute, credited Trump for deterring Putin, who he said had â€œvalidated the need for allies to invest more in their security and defense.â€

â€œI think President Trump, at least at it related to Ukraine, was able to deter Vladimir Putin. And that was a function of unpredictability, which is valuable to deterring an autocrat like Vladimir Putin,â€ he said. Still, he argued Putinâ€™s actions had been â€œso aggressive and so brazen and so immoralâ€ that it had â€œde-emphasized the differenceâ€ between various foreign policy approaches.

Still, the war renews focus on the controversial role Ukraine played during Trumpâ€™s tenure, particularly the way the then-president used defense of the struggling country as a bargaining tool to improve his domestic political standing.

Trump was impeached for the first time for trying to pressure Ukraine to investigate his 2020 Democratic opponent, Joe Biden, and his son, Hunter Biden. The effort included holding up nearly $400 million in U.S. security aid to Ukraine and leveraging an Oval Office visit that Ukrainian President Volodymyr Zelenskyy had been requesting.

Trump also pushed discredited claims that Ukraine, not Russia, had meddled in the 2016 election, repeatedly siding with Putin over his own national intelligence agencies.

â€œPutin is the critical agent, but certainly Trump contributed to it with his scheme back then and continued to contribute it by undermining national security,â€ said retired U.S. Army lieutenant colonel Alexander Vindman, the former national security council whistleblower who raised alarms about Trumpâ€™s pressure tactics. â€œUltimately the president undermined U.S. foreign policy because he weakened Ukraine.â€

As he aims to play a significant role in this yearâ€™s midterms and potentially run for president again in 2024, Trump has shown little interest in calibrating his approach to Putin.

Former Secretary of State Mike Pompeo, who has been laying the groundwork for his own potential presidential run, has largely abandoned the language he was criticized for using before the invasion, when had called Putin â€œvery capableâ€ and said he had â€œenormous respect for him.â€ Even Tucker Carlson, the popular Fox News host who had openly questioned why he shouldnâ€™t side with Russia over Ukraine, has tried to walk back his pro-Russia rhetoric, saying, â€œWeâ€™ve been taken by surprise by the whole thing.â€

Thatâ€™s left Trump relatively isolated, defending his decision to label Putin as â€œsmartâ€ and criticizing the response from Biden and other Western leaders, even as he has denounced the invasion as â€œhorrificâ€ and a â€œvery sad thing for the world.â€

â€œNATO has the money now, but theyâ€™re not doing the job they should be doing,â€ he said this week on Fox Business. â€œItâ€™s almost like theyâ€™re staying away.â€

That has earned rebuke from some in his party.

In a speech to GOP donors Friday night, Pence forcefully defended NATO and admonished those who have defended Putin as he, too, weighs a presidential run.

â€œThere is no room in this party for apologists for Putin,â€ he said, according to his prepared remarks. â€œThere is only room for champions of freedom.â€

â€œHeâ€™s a thug. Heâ€™s a killer,â€ McConnell said. â€œHeâ€™s been on the rampage and this will not end well for him.â€

Chris Stirewalt, a senior fellow at the right-leaning American Enterprise Institute think tank and a contributing editor of The Dispatch, said Russiaâ€™s invasion of Ukraine is fundamentally different from the wars in Afghanistan and Iraq that turned large swaths of the American public against foreign intervention and which Trump was able to use to his political advantage.

â€œPutin,â€ he said, â€œhas undone so much of what Trump and nationalists in the United States had done to change the global order.â€