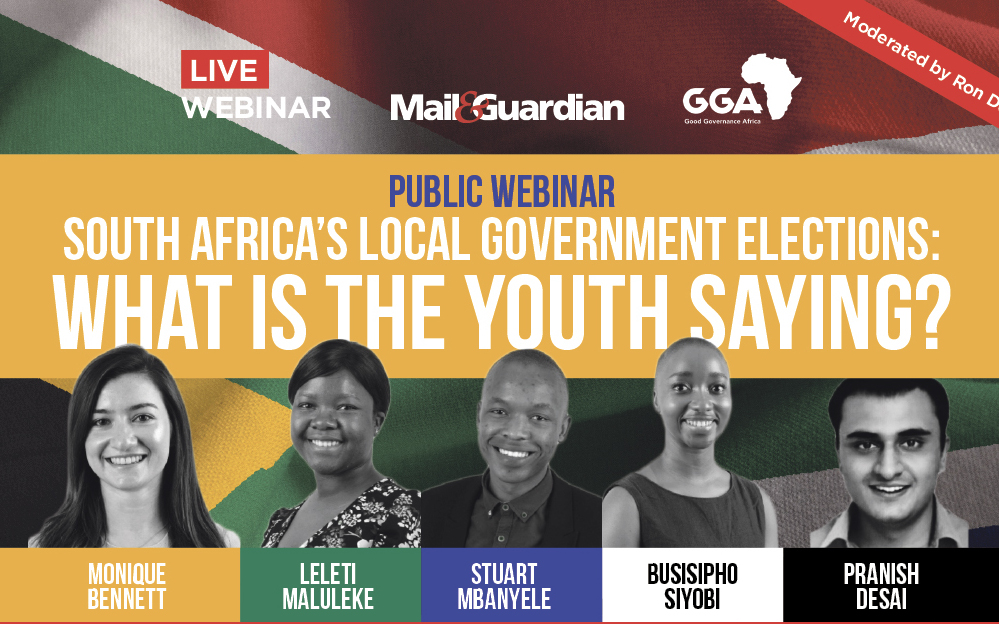 A mixture of youth mistrust of the government and pressing economic times could be the reason a huge number of eligible young voters did not register to vote in the upcoming local government election.

The upcoming local government election presents the youth with an opportunity to become active role players in determining the future of the country, but with statistics indicating that as many as 13-million people eligible to vote did not even bother to register for the polls, questions are being raised about the reasons behind this apathy.

The Independent Electoral Commission of South Africa reported in September that 26.2-million South Africans had registered to vote.

However, a worrying development noted by the IEC was that more than 13-million citizens eligible to vote had not registered.

“Young people between the ages of 15 and 25 constitute a fifth of the world’s population,” the UN Youth states.

The organisation advises that “in order to respond to the needs of young people, and to guarantee that their basic human rights are recognised and enforced, young people’s active and meaningful participation in their societies and in democratic practices and processes is of crucial importance.

“Meaningful youth participation and leadership require that young people and young people-led organisations have opportunities, capacities, and benefit from an enabling environment and relevant evidence-based programmes and policies at all levels.”

Leleti Maluleke, a researcher with the Good Governance Africa (GGA), which co-hosted a webinar on youth and elections with the Mail & Guardian, said one of the worrying developments with the upcoming election is that even independent councillors are not talking to young people.

Monique Bennett, also a researcher with the GGA, pointed to a difference in mindset between generations born before 1994 and those born into the democratic dispensation as one of the contributing factors.

Bennett noted that those who lived in the apartheid era had a different experience, which appears to be one of the factors that always motivated them to vote. However young people growing up in the democratic dispensation find themselves confused, especially since political parties seem to be more interested in bashing the ruling party than putting forward solutions to the challenges facing the youth.

Pranish Desai, a data analyst with the GGA, said political parties seem to forget about young people until there’s an election on the horizon, which contributes to mistrust of politicians and political parties.

Maluleke suggested that one of the contributing factors to the violent looting that left more than 300 people dead in July could have been that it was an outlet of frustration for youth.

“The youth felt they were not being heard. If political leaders listen to what the youth want, we will see less of these protests,” she said.

M&G editor Ron Derby, who facilitated the dialogue, enquired whether the youth had built on the energy of the #FeesMustFall movement from six years ago, which shook the echelons of power.

Maluleke reasoned that the movement was weakened by political parties, which identified and eventually absorbed some of the leaders of the movement into their ranks.

GGA researcher Stuart Mbanyele said while it was encouraging that some of the #FeesMustFall leaders and participants were now vying for seats as councillors in the upcoming election, it should be noted that not everyone can become a political leader.

Mbanyele argued that members of the #FeesMustFall can participate in the building of society through other ways, for instance by becoming engineers and playing a role in other critical sectors.

Bennett said that the outbreak of the Covid-19 pandemic and the resultant lockdowns exacerbated the frustration of youth who were already struggling to find work.

Mbanyele said the outbreak of the pandemic exposed many fault lines as far as governance is concerned. He said the relaxation of lockdown regulations in the run-up to the election further widened the mistrust of the political system by the youth.

“If we [the youth] don’t vote, our voices are taken from us,” said Maluleke.

Desai noted that youth voter apathy is a global problem, saying that although young people do vote, the problem is that they do so at a very low rate.

A survey by the United Nations Inter-Agency Network on Youth Development said the majority of 13 000 respondents from 186 countries highlighted that the main challenges for youth were limited opportunities for effective participation in decision-making processes.

“With limited opportunities to meaningfully participate in inclusive decision-making processes, young men and women feel excluded and marginalised in their societies and communities,” the UN IANYD found.

“Finding solutions for it is difficult. The direction of the trend is very worrying for the longer term health of South Africa’s democracy,” said Desai.

Sakhile Buthelezi, an audience member, noted that political party manifestos do speak to the issues at grassroots level such as housing, electricity, water and safety in the communities, but because of corruption in government the youth have become wary of the system.

“Corruption has become the business of the day. The state funds that are meant to develop the communities and create job opportunities are being looted. These are the frustrations that make youth reluctant to participate in this voting process,” Buthelezi said.

Another audience member, Kudakwashe Bandama, noted that broken promises during previous elections and seeing the same undertaking being made again were behind some of the reasons some youth do not vote.

Donald Tlaka suggested that young people are not blameless in this debacle, saying they have allowed politicians to divide them according to race, class and gender.

“It will take courageous young people to stand against political rhetoric and come together across class and race to address the issues that confront them,” Tlaka said.

Wiseman Mthanti said local government elections hold “so much potential to really provide a better standard of living for everybody”. He however did not think the political environment enables these potentials to be realised. He cited the huge number of protests in his home town in Ekurhuleni as a sign of the despair among the youth and the general electorate.

In an article titled Unpacking malfeasance in South Africa’s municipalities, published by Good Governance Africa in June, Mbanyele suggested ways in which citizens can strengthen and exercise their agency against poor governance.

He argued that instead of resorting to apathy due to the challenges outlined in a report by the Auditor-General, “increased engagement with political parties and demands for accountability by citizens ahead of the elections present an opportunity for citizens to hear what they have to say about corruption in municipalities.”

“They should ask tough questions on whether their chosen leaders bring innovative ways to stem the tide against the phenomenon of deterioration, poor governance and the breakdown of the public compact.

“Citizens should exercise their civic duty, assert their rights, and articulate their grievances through the ballot in the upcoming elections. An increased voter turnout, which opts for accountable leadership, ethical representation which promotes public interests, trust, and good is what is now required,” Mbanyele said.