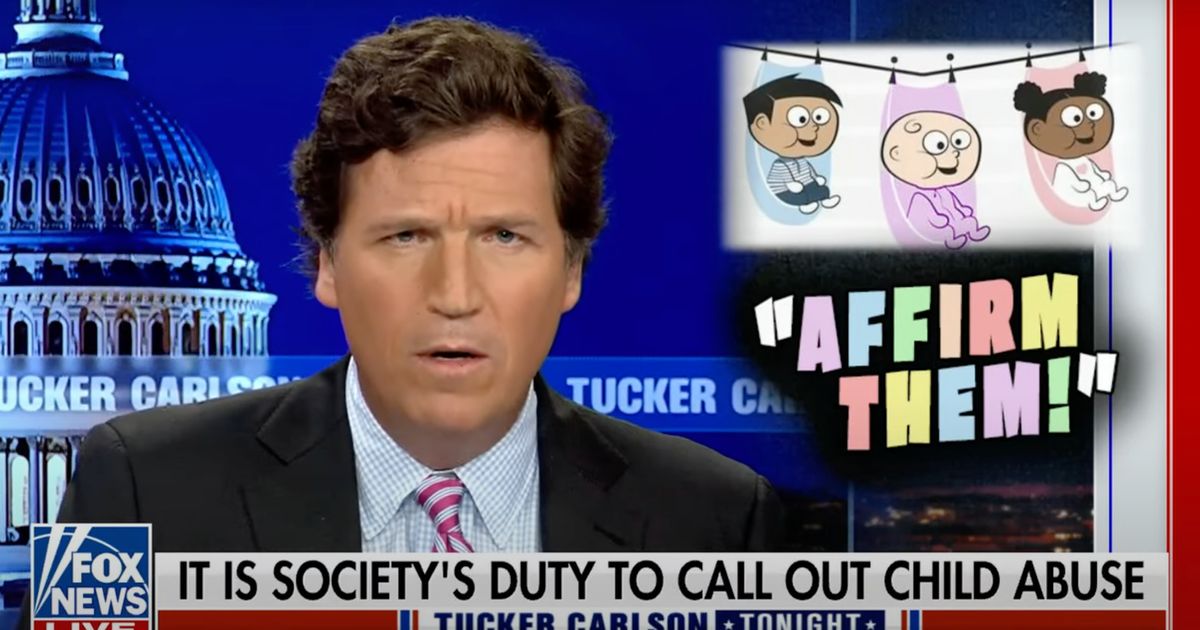 Tucker Carlson was back at full-throttle anti-LGBTQ messaging Tuesday, one day after condemning the “horrifying” attack on a gay nightclub in Colorado Springs, Colorado, over the weekend that left five people dead.

The Fox News host opened his segment by ticking off a list of his tropes characterizing gender-affirming care for trans youth as child abuse and suggesting that teaching children about the existence of gay and trans people equated to sexual exploitation ― all while arguing he had nothing at all against gay people.

Then he introduced his guest, Jaimee Michell, the founder of an anti-trans “coalition of gays” called Gays Against Groomers, which pushes the demonizing narrative that having conversations with children about gender identity is somehow grooming, sexualizing and indoctrinating them.

Michell raised the temperature further, suggesting anti-LGBTQ attacks like the one at Colorado Spring’s Club Q would continue until the “evil agenda” of gender-affirming care is stopped.

Tucker Carlson guest: Shootings like the Club Q shooting are going to keep happening “until we end this evil agenda” of gender-affirming care. pic.twitter.com/4ajSonqlug

“You know, saying that ‘groomer’ is an anti-LGBTQ slur, that is doing irreparable damage to us as a whole, and it’s putting a really large target on our backs,” she said. “And unfortunately, you know, the tragedy that happened in Colorado Springs the other night, it was expected and predictable.”

“Sadly I don’t think it’s going to stop until we end this evil agenda that is attacking children,” she added.

As the Anti-Defamation League explains in its extremism center, false rhetoric labeling members of the LGBTQ+ community as “groomers” in recent years has prompted an onslaught of hostile legislation and policies against LGBTQ people and fueled a spike in harassment, threats and violence targeting their community.

Carlson has repeatedly used that language and messaging, as have right-wing politicians and candidates, many of whom are now being criticized for laying the groundwork for the violence.

Carlson and his guest were met with swift and fierce condemnation Tuesday.

for the rest of forever, whenever these freaks tell you that you’re “politicizing tragedy” when you call out their shit, remember how they literally got on TV and said the killings would continue until you agree to reshape society around their grotesque fabrications. https://t.co/XPqCOo6xxC

Jaimee Michell of Gays Against Groomers said the shooting at Club Q was predictable and more will keep happening until gender affirming care is banned. This is the explicit endorsement of terrorism against LGBTQ people and Tucker Carlson just smirked as she said it. https://t.co/mleTBocIZw