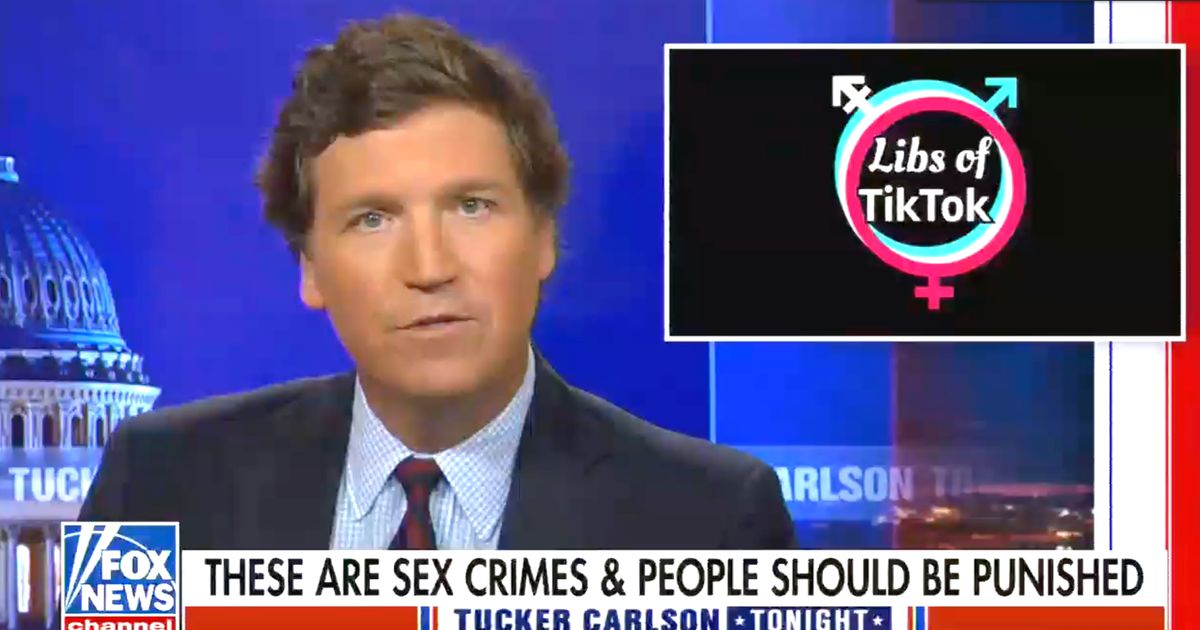 Tucker Carlson unleashed a hateful tirade against LGBTQ people and their allies Monday and suggested that teaching children about queer identities is a crime.

According to the Fox News host, educating kids about any non-heteronormative identity equates to “children being used as props in the sexual fantasies of adults.”

Carlson showed clips of several teachers who had taken to social media to discuss their experiences teaching kids about what it means to be LGBTQ. One of the videos featured a teacher who said: “I have had multiple students come out to me, not just with their sexuality, but also with their gender identity. It’s one of the reasons I think it’s so important to be out and loud and proud, so that people feel comfortable coming to me and talking to me.”

Another video showed an elementary school teacher who said on TikTok that she explains to her students: “Some people are girls, some people are boys, some are both, some are neither.”

According to Carlson, these comments were “utterly outside the bounds of what’s acceptable. It’s not a close call.”

According to Tucker Carlson, teaching kids about *the existence* of queer people is morally wrong and teachers are pedophiles if they support queer students in any way. pic.twitter.com/UQ7PuxGHiZ

Carlson then conflated teachers educating children about these identities with strangers approaching children to talk about sex.

“If you were walking through the park with your kids and a stranger came up and started talking to them, say to your fifth grader, your 5-year-old, even your 14-year-old about sex, what would you do? Well, you would call the police, of course. That’s not allowed, it’s a crime,” he said. “But teachers are allowed to do it and then to brag about it. And it’s not stopping with classroom instruction. All over the country. Adults are forcing children to attend drag shows.”

Carlson has repeatedly pushed the misconception promoted by conservatives that simply defying gender norms is somehow inherently sexual. After showing videos of kid-friendly drag shows, the Fox News host said these were examples of “sexual fantasies playing out in public.”

“That’s fine, go do your thing, but you are not allowed to bring children into your sexual fantasies because that’s a species of child molestation,” he said. “You can be fully clothed when it happens. It doesn’t make it any less abusive or any less immoral.”

The GLAAD Accountability Project has created a lengthy catalogue of Carlson’s anti-LGBTQ rhetoric and his platforming of guests who spread misinformation that harms queer people.

In 2020, Carlson argued that “anyone who talks about identity should be immediately disqualified” from military service. He also said parents who accept and embrace their transgender children are child abusers and called it a nationwide epidemic. In 2019, Carlson refused to apologize after clips surfaced of him using a homophobic slur.