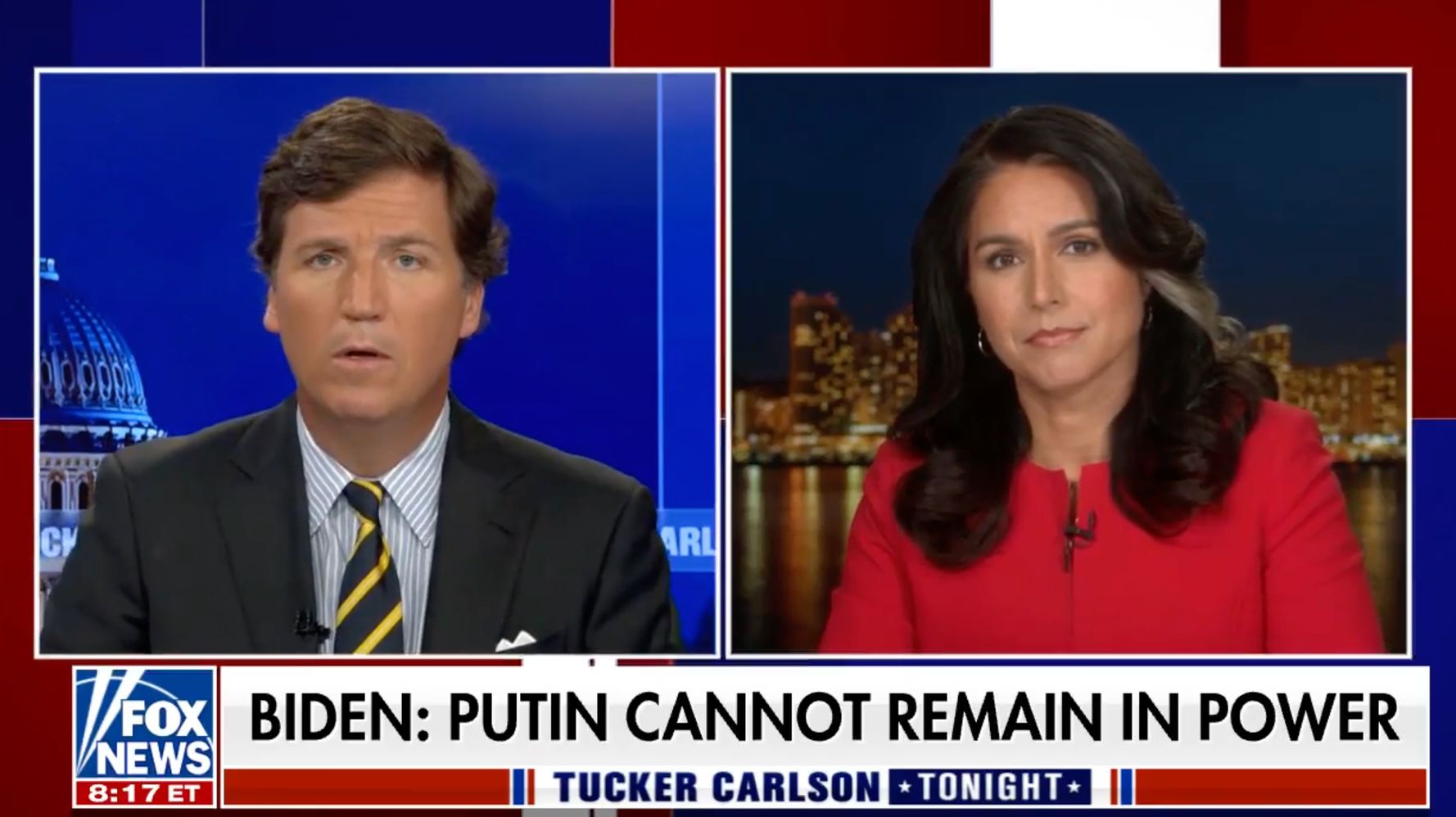 During a broadcast on Russian state television this week, Gabbard was apparently referenced in very friendly terms by one of Putinâ€™s most prominent propagandists, Vladimir Soloviev.

He introduced Gabbard, a Democratic primary candidate for the 2020 presidential race, as â€œour girlfriend Tulsi,â€ according to a translation by Russian media analyst Julia Davis, a columnist for the Daily Beast.

A clip was then aired of Gabbardâ€™s appearance on Mondayâ€™s episode of â€œTucker Carlson Tonightâ€ in which she suggested President Joe Biden was secretly plotting to remove Putin from power.

After the clip aired, a panelist reportedly asked, â€œIs she some sort of Russian agent?â€

According to Davisâ€™ translation, Soloviev said she was.

After the clip plays, one panelist asks: “Is she some sort of a Russian agent?” The host quickly replies: “Yes.” pic.twitter.com/VVNGmtjavU

During Mondayâ€™s interview, Gabbard argued that Biden was pushing for regime change in Russia through â€œeconomic warfare.â€

â€œThey are doing so by waging this modern-day siege against Russia, isolating, containing, destroying their economy, starving the Russian people in the hope that the Russian people or the military will rise up and revolt and overthrow their government and get rid of Putin,â€ she said during part of the excerpt that aired in Russia.

On Sunday, Biden said that Putin â€œcannot remain in powerâ€ in off-script remarks during a speech in Poland. White House officials quickly clarified that Biden was not advocating for regime change in Russia but that â€œPutin cannot be allowed to exercise power over his neighbors or the region.â€

But according to Gabbard, â€œit was not a gaffe at allâ€ and Biden is â€œlyingâ€ about his true motives.

The Putin-friendly rhetoric is nothing new for the former congresswoman from Hawaii. Last month, as Putin was beginning his invasion of Russia, Gabbard blamed the U.S., NATO and Ukraine, claiming that the war could â€œeasily have been avoidedâ€ if NATO had â€œsimply acknowledged Russiaâ€™s legitimate security concerns regarding Ukraineâ€™s becoming a member of NATO.â€

She has also lent credence to a Russian-backed conspiracy theory about U.S. biological labs in Ukraine that American officials have warned could serve as justification for Russia to use biological and chemical weapons against Ukraine.

In 2019, former Secretary of State Hillary Clinton suggested in an interview that Gabbard, then a long shot in the Democratic presidential field, was being groomed by Russia as an â€œassetâ€ who would run as a third-party candidate and help usher in a Republican president. Gabbard filed and then later dropped a defamation lawsuit against Clinton over the â€œassetâ€ comment.

Carlson, meanwhile, has been a favorite of Russian propagandists for weeks. The Fox News host has repeatedly been featured on Russian state-sponsored television for his defenses of Russia and criticisms of the U.S., NATO and Ukraine, and was even reportedly endorsed by the Kremlin in a leaked memo to state media.

Earlier this week, he promoted a bizarre theory to keep Putin in power, suggesting that Islamic extremists would somehow get hold of the countryâ€™s nuclear weapons and use them on Americans if he was removed.