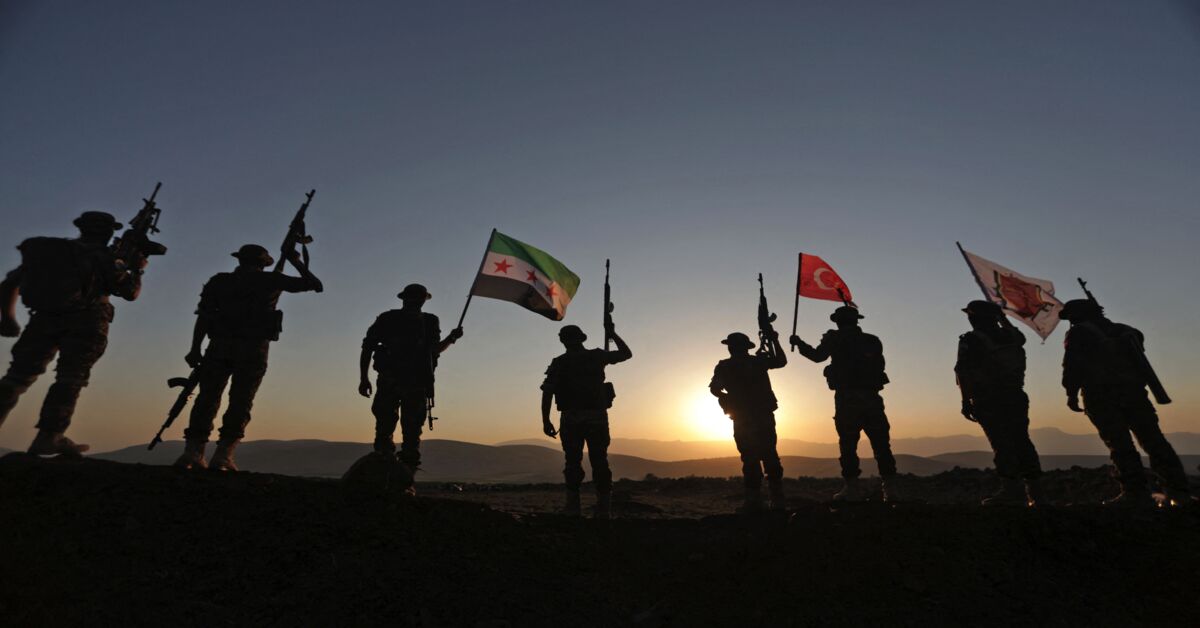 ALEPPO — The Turkish army has intensified its attacks against the Kurdish-led Syrian Democratic Forces (SDF) in northeast Syria over the past few weeks.

These developments have raised questions about the goals behind the escalation and on the possibility of a Turkish-backed military operation against the SDF, which is backed by the US-led international coalition.

Since October 2019, areas of northeast Syria have been subjected to a Turkish-Russian agreement to move the SDF 30 kilometers back from the Turkish-Syrian border and conduct joint Russian-Turkish patrols.

The Turkish army seemingly adopted a new strategy in its recent escalation against the SDF by relying on drone attacks to target prominent SDF commanders.

Simultaneously, Turkish forces stationed at Turkish bases in Syria shelled SDF positions in Tal Tamr, Abu Rasin, and in other villages and towns near the demarcation line in the Hasakah countryside, which has witnessed large-scale civilian displacement due to the shelling.

Since mid-August, Turkish forces and the FSA have even targeted Manbij in the eastern Aleppo countryside and the outskirts of Ain Issa in the northern Raqqa countryside, where dozens rallied Sept. 1 in front of the Russian military base to protest the Turkish bombardment of the town and its surrounding areas.

An FSA military official based in the city of Ras al-Ain in the Hasakah countryside told Al-Monitor on condition of anonymity, “The FSA factions have increased their military readiness on the battlefronts with the SDF in Ras al-Ain countryside since mid-August. The Turkish army oversaw the operations to redeploy the forces along the demarcation line with the SDF.”

He added, “The military alert was not limited to the FSA-held areas east of the Euphrates, but also involved the Aleppo countryside west of the Euphrates in the Jarablus countryside and al-Bab city. Military battalions were formed under the supervision of the Turkish army, each tasked with guarding a specific demarcation line. A Turkish military backup will allow these battalions to deal with any sudden development on the ground.”

The source continued, “Also, Turkish military reinforcements arrived at most of the demarcation lines with the SDF, including armored vehicles, artillery bases and missiles.”

For his part, Maj. Yusuf Hamoud, a spokesperson for the FSA-affiliated Syrian National Army, told Al-Monitor, “The Turkish army and the FSA are targeting the SDF operation centers because their forces continue to bombard civilian areas in the Aleppo countryside and the Operation Peace Spring areas. It is thus necessary to deal with the sources of the shelling. It is normal to take these military measures.”

Hamoud added, “The situation is open to all possibilities, and nothing will prevent us from conducting it as long as the SDF is shelling the populated areas in Ras al-Ain, Tal Abyad and Afrin in the Aleppo countryside.”

Hamoud indicated that “the battles in Syria will go on. The map and the military distribution will also change. The military escalation you have noticed there is calculated. It targets military positions, gatherings of security commanders and specific figures, and the sources of fire at the opposition areas.”

An SDF military official in the Hasakah countryside told Al-Monitor on condition of anonymity, “The Turkish army and its allied factions have increased their shelling on the populated villages with the aim of undermining stability in the area and sowing fear among the residents to force them to flee.”

The source ruled out the possibility that the Turkish army and its allied factions carry out a large-scale military operation at the present time. He said, “The escalation may continue, but the situation on the ground is not heading toward an open war. What is happening is an arrogance of power.”

In conjunction with the Turkish escalation in northeastern Syria, Russian forces set up in August several military points along the frontlines with the FSA-controlled areas in the Operation Peace Spring area. They set up military points in Raneen village south of Suluk town and in Shirkrak south of Tell Abyad. They are also preparing to set up other military points in the vicinity of al-Alia Silos and al-Mabrouka in Ras al-Ain.

Anas Shawakh, a researcher at the Istanbul-based Jusoor Center for Studies, told Al-Monitor, “The recent Turkish escalation aims primarily to pressure Russia to abide by the terms of the Sochi agreement signed between the two sides in 2019 after Operation Peace Spring ended.”

He added, “It is clear Turkey believes the Kurdistan Workers Party (PKK) and SDF leaders are still present and moving within areas close to its border. In case this pressure goes on, it will inevitably force the SDF to limit the movement of the PKK leaders within its ranks, which may increase discord and tension within the SDF ranks.”

Shawakh “ruled out any intention by Turkey or Turkish-backed factions to launch a military operation at the present time. Yet it is still possible, especially with the renewed military escalation between the two parties in a number of areas, especially in Ain Issa.”

He indicated “the SDF fears the Turkish army and its allied factions will launch a military operation against them, especially since they (the SDF) are concerned about getting the same fate as the Afghan army, which the US supported following the withdrawal of the US from Afghanistan. The US-led coalition has repeatedly said its mission in Syria is to fight the Islamic State IS, not Turkey or anyone else.”

COVID booster use may be expanded, US health officials say