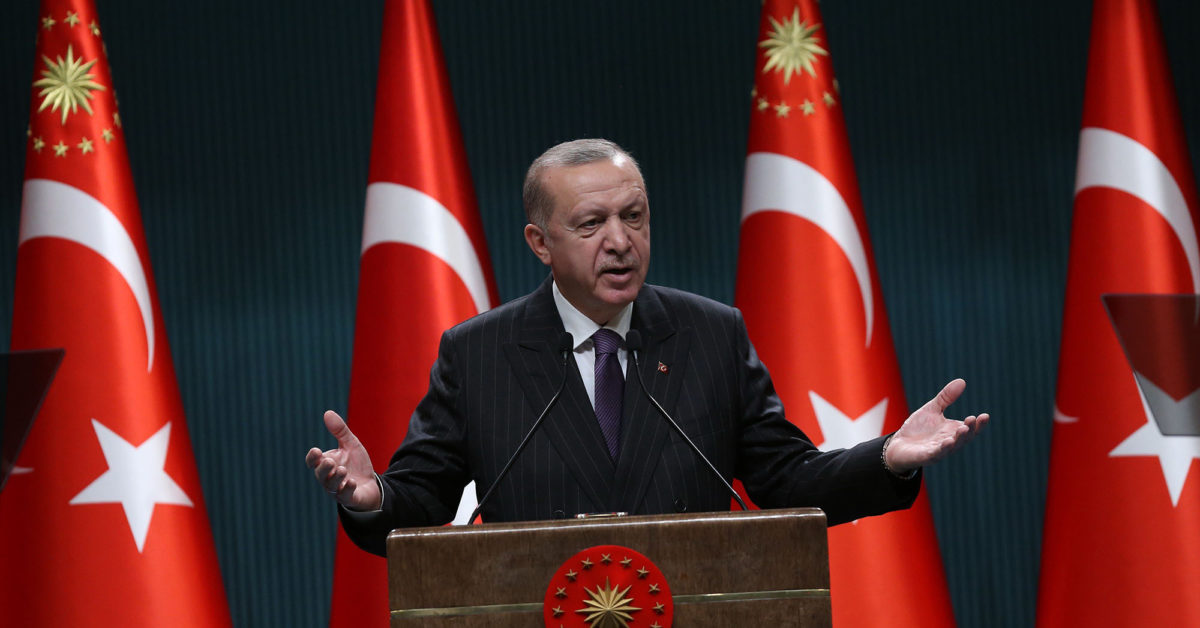 A charm offensive by Turkish President Recep TayyipÂ ErdoÄŸan has put the EU in a bind over whether to press ahead with further sanctions against Ankara.

After months of tensions with Turkey, EU leaders unanimouslyÂ agreedÂ in December to add more names to a list that currently targets two top managersÂ at the Turkish Petroleum Corporation (TPAO)Â over unauthorizedÂ drillingÂ for natural gas in the Eastern Mediterranean.Â

Greece, Cyprus and France have presented a new list of evidence against individuals and entities to sanction, diplomats say. Leaders have also tasked EU foreign policy chief Josep Borrell with producing a report for a European Council meeting in March on the state of play, including further options to defend EU interests, while also keeping the door open to de-escalation.

But ErdoÄŸan is now trying to build bridges with some EU countries that have argued for tough action against Ankara, reaching out, for example, to Greece and France.Â

The move comes as ErdoÄŸan also seeks to reset relations with Washington, aiming for a fresh start under Joe Biden after the Trump administrationÂ imposed sanctionsÂ against his country, a fellow NATO ally, over its deployment of a Russian-made missile defense system.Â Some European officials suspect the change in U.S. administrationÂ is driving the change in Turkish behavior.

Diplomatic activity in recent days has been intense.Â

German Foreign Minister Heiko Maas on Monday met his Turkish counterpart MevlÃ¼t Ã‡avuÅŸoÄŸlu and ahead of his visitÂ issued a statementÂ saying that Germany welcomes “the fact that signs of dÃ©tente have been coming from Turkey” and stressed that “the early termination of the seismic survey off Cyprus brought about by the withdrawal of the research vessel Barbaros is also a positive signal from Ankara.”Â

Barbaros is a seismicÂ research vessel thatÂ tookÂ part in unauthorized drilling that was heavily criticized by the EU.Â But the importance of the Turkish move remains to be seen.Â â€œTo the best of our knowledge the vessel was withdrawn due to bad weather in the area,â€ said a Cypriot official. â€œIn any case, we have watched this movie before and we know very well how it ends â€” vessels are withdrawn temporarily ahead of important meetings or events, only to return shortly thereafter.”Â

Turkey is expected to step up its overtures to the EU when Ã‡avuÅŸoÄŸlu visits Brussels this Thursday and Friday for talks with Borrell, European Council President Charles Michel and other senior officials.

While diplomats are unsure about the sincerity of Turkey’s change of tone, it may be enough to bolster EU members who have urged caution when it comes to cracking down on Ankara. “They want to trust it because they don’t want to do anything,” said a senior EU diplomat.

Both sides have strong incentives to pursue better relations. Unable to agree on a new migration policy since the 2015-16 crisis, the EU has de facto outsourced a big part of the issue to Turkey, which hosts some 3.5 million Syrian refugees. That gives Ankara considerable leverage over the EU.

On the economic front, the EU is Turkey’s largest trading partner, while Turkey is the EU’s fifth-largest.

Such factors have prompted countries like Germany and Italy to urge caution when it comes to wielding more stick than carrot with Ankara.

Turkey’s diplomatic offensive to defuse tension with the EU has multiple fronts.

When French President Emmanuel Macron got coronavirus on December 17, a week after the December European Council summit agreed to impose new sanctions on Turkey, ErdoÄŸanÂ wrote him a letter, addressing him as “Dear Emmanuel,”Â wishing him well and inviting him to renew their conversations.Â

“I would like to discuss again with you our common fight against the COVID-19 epidemic … our bilateral relations and the relations between Turkey and the EU, as well as regional issues, as soon as you feel better,” the letter,Â seen by POLITICO,Â said.Â

It was a clear change of tone after months of public insults and questioning Macron’s mental health.Â The two presidents also didn’t manage to speak throughout the crisis in Nagorno-Karabakh even though France is a co-chair of the Organization for Security and Co-operation in Europe’s Minsk Group in charge of finding a peaceful solution to that conflict. Instead, Turkey provided support for Azerbaijan and held talks with Russian President Vladimir Putin.Â

Macron responded in January with his own letter, though there is no phone call or video call scheduled between the two leaders, according to an Ã‰lysÃ©eÂ official.

“France has always considered that it is important to have a dialogue with Turkey,”Â theÂ Ã‰lysÃ©e official said.Â

On January 9, ErdoÄŸan took part in a videoconference with Borrell and European Commission President Ursula von der Leyen, after which his officeÂ declaredÂ that Turkey wants to â€œturn a new page in its relations with the EU in the new year.â€

Speaking to EU ambassadors last Wednesday, von der Leyen said that during the call “there was clearly a change of [ErdoÄŸan’s] tone but she wasn’t overenthusiastic, there was no illusion,” according to a second senior EU diplomat, who was at the closed-door meeting.

Turkey has also invited Michel to go to Ankara. “The invitation was for early March so that might be too early in terms of COVID measures but he’s still reflecting,” said an EU official.

Meanwhile, after five years, Turkey and GreeceÂ agreedÂ on a new round of exploratory talks over their disputed territorial watersÂ on January 25.Â

For some EU diplomats,Â the threat of sanctions is working.Â

But forÂ Selim Yenel, a former Turkish ambassador to the EU who now chairs the Global Relations Forum, a think tank, Ankara is changing tackÂ becauseÂ it has become increasingly isolated from its neighbors and sees the EU as its best shot at changing things.

“It’s necessary to improve these relations, especially with the EU. Most of our trade is with the EU,” he argued.

But tensions with Turkey go beyond the unhautorized drilling in the Eastern Mediterranean.Â

In November, ErdoÄŸanÂ calledÂ for a â€œtwo-stateâ€ solution for Cyprus, which has been divided since Turkeyâ€™s 1974 invasion, instead of the federal solution supported by the EU and the U.N. ErdoÄŸan also talked about the two-state solution during a provocative picnic in the ghost town of Varosha, a once-glamorous beach resort that the Turkish Cypriot government recently partially re-opened in violation of U.N Security Council resolutions.

New EU sanctions were initially expected to be agreed ahead of a meeting of EU foreign ministers on January 25. But now diplomats say that they expect them in February, leaving more time for diplomacy.Â

Despite Ankara’s diplomatic overtures,Â for nowÂ it seems the EU wouldÂ notÂ back off completely from imposing more sanctions.

“The lack of progress on Cyprus makes it harder to drop them entirely,” said a diplomat for an EU member country. However, the second senior EU diplomat also said that Turkey’s ongoing outreach means it’s “very difficult to say whether there will be unanimity.”

Some kind of watered-down compromise, punishing only very few individuals, and without a political profile, at this stage is “likely,” the senior diplomat said, but a final decision will depend on events in the next days and weeks.Â