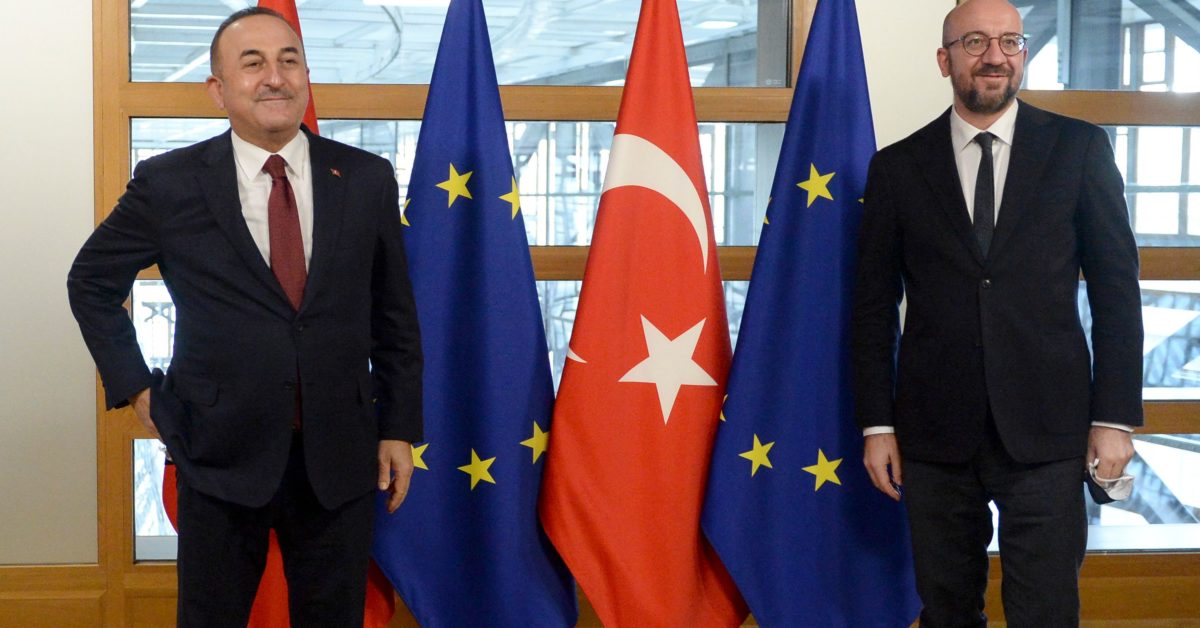 If the EU decides to impose further sanctions against Turkey it will ruin the dialogue between Ankara and Brussels, said Turkish Foreign Minister MevlÃ¼t Ã‡avuÅŸoÄŸlu.

However, if the EU opts to avoid sanctions and reenergize accession talks, then Ankara is ready to meet all the criteria, Ã‡avuÅŸoÄŸlu told POLITICO in an interview during a two-day visit to Brussels this week, where he met with top EU officials including European Commission President Ursula von der Leyen and European Council President Charles Michel, as well as some MEPs and NATO Secretary-General JensÂ Stoltenberg.

In December, EU leaders agreed to impose further sanctions on Turkey for unauthorized drillingÂ for natural gas in the EasternÂ Mediterranean, while also keeping the door open for further dialogue. They tasked Josep Borrell, the EUâ€™s top diplomat, with preparing a report on the way forward with Turkey, to be presented at a March summit. Borrell will brief EU foreign ministers on the state of play with Turkey at a meeting Monday.

The decision to add more names to the sanctions list came after several months of tensions with Ankara on a number of fronts, from migration to the reunification of Cyprus. Since then, Turkish President Recep TayyipÂ ErdoÄŸanÂ has launched a charm offensive by reaching out to Paris and Athens, and the future of these sanctions is now unclear. Â

According to some EU diplomats, sanctions could be brought in, but would only target low-level officials. But Ã‡avuÅŸoÄŸlu opposes those too. In his meetings this week, â€œI told everybody that any restrictive measures against Turkey will ruin everything,â€ he said. â€œThis dialogue has to be based on trust so nobody can justify any restrictive measures against Turkey.â€

The meetings were â€œcandid,â€ he said.

Some EU officials believe that the Turkish charm offensive can be explained by the change of administration in the U.S. Others argue that the threat of sanctions and the hardline stance taken by countries such as France has worked.

Ã‡avuÅŸoÄŸlu gave a different explanation. â€œWe started giving positive messages because we took the joint statement of the December summit as an extended hand to Turkey. Thatâ€™s why we reciprocated.â€

He argued that the language used by EU leaders at a meeting in October was merely â€œthreateningâ€ whereas the language in December was â€œbetterâ€ but still contained parts that Ankara didnâ€™t agree with.

One senior EU diplomat said he was skeptical of this explanation, arguing he didnâ€™t see such a big difference between the language used in October and December. A second diplomat said he found the Turkish explanation â€œsurprising,â€ stressing that the December text â€œwas merely a follow-upâ€ although in it leaders did insist on keeping the door open â€œand probably this was a reason for reliefâ€ for Turkey.

Many officials in Brussels are still skeptical of Turkeyâ€™s intentions, and both Borrell and von der Leyen have called on Turkey to do more to strengthen the relationship. Ã‡avuÅŸoÄŸlu said of mutual efforts that â€œit has to be lastingâ€ rather than â€œhaving a positive agenda for a couple of days or a month.â€

Ã‡avuÅŸoÄŸlu renewed Turkeyâ€™s call on the EU to revisit and fully implement the March 2016 deal reached with Ankara in the aftermath of the 2015-2016 migration crisis, in which the bloc effectively outsourced to Turkey the management of some 3.5 million Syrian refugees. The agreement included commitments on visa liberalization for Turkish citizens, on the modernization of the customs union and â€œthe commitment to reenergize the accession process.â€

That accession process has been effectively frozen since June 2018. Potential EU membership was a contentious issue for member states from the start, but it became even more controversial in the aftermath of the Turkish crackdown on opponents following a failed coup in July 2016.

â€œIf we can revisit this joint statement, we will continue honoring our obligations as we did in the past,â€ Ã‡avuÅŸoÄŸlu said. â€œWe need better cooperation, more obligations from both sides and Turkey will do that. If we reenergize the negotiations access process, Turkey will meet all the opening and closing benchmarks of the chapters.â€

These benchmarks towards accession include strengthening the rule of law, which is another big issue for the EU. Ã‡avuÅŸoÄŸlu said Turkey was embracing reforms. â€œNow, regardless of this relationship with the EU, we are focusing on the reform agenda more than ever,â€ he said. â€œWe had traumas in the past, attempted coups â€¦ and now we are working on the human rights action plan. The minister of justice yesterday explained a little bit of it and he said that it is almost ready and [thereâ€™s] also a judicial reform strategy [and] other reforms that are needed for Turkey, for democracy, for the economy.â€

These reforms â€œwill be also helpful to change the atmosphere, in particular with the European Parliamentâ€ although â€œI cannot promise you that the entire atmosphere will be changed,â€ he said.

During the meeting with NATOâ€™s Stoltenberg, Ã‡avuÅŸoÄŸlu defended Ankaraâ€™s purchase of the S400 missile system from Russia, which alarmed NATO allies, prompted the U.S. to impose sanctions on Ankara and saw Turkey suspended from helping build the new F35 fighter jet.

â€œWe discussed it and I told him that our proposal to the previous administration is on the table, to establish a joint working group of experts to examine the claims of the United States very carefully and NATO should be in that,â€ he said. â€œThis is the only way that we can continue to deal with this issue, instead of sanctions.â€

â€œWhat I said was very clear: unless we are guaranteed to purchase air defense systems from the United States â€¦ or from other allies â€¦ we have to seek other alternatives.â€