U.K. Grants Asylum to Ex-Consulate Worker Who Told of Torture in China 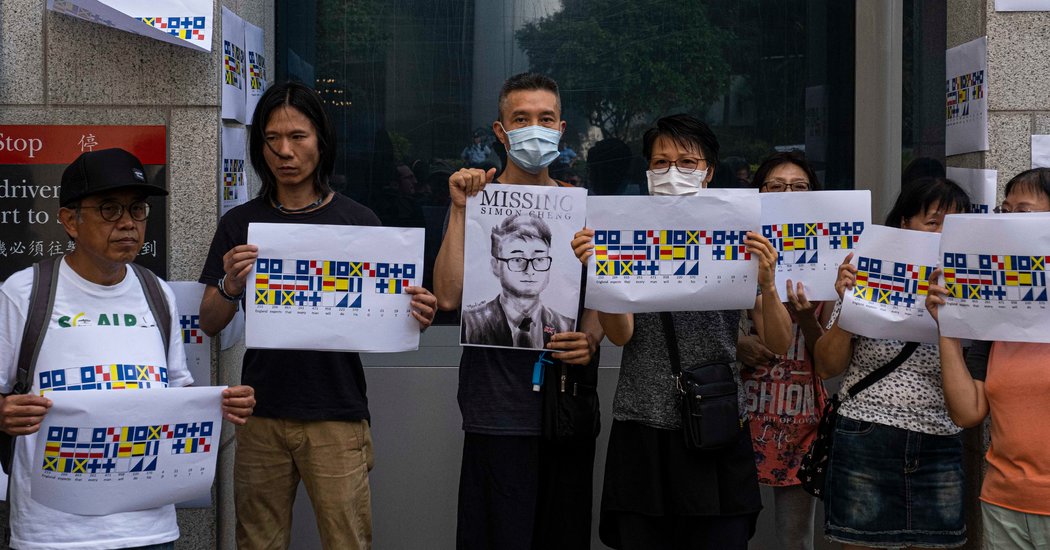 HONG KONG â€” A former employee of the British Consulate in Hong Kong who said he was tortured by the authorities in mainland China last year has been given asylum in Britain.

The disappearance last year of the consulate worker, Simon Cheng, during the height of pro-democracy demonstrations in Hong Kong highlighted the issues that had set off months of protest. Hong Kongers took to the streets in part over fears that they could be subject to the opaque Chinese legal system as mainland officials expand their reach over people in semiautonomous Hong Kong, a former British colony.

â€œI am grateful for the determination and courage shown by the U.K. government to rescue British nationals,â€ Mr. Cheng wrote on Facebook above a photo of the letter granting him asylum. â€œI also hope my case can be a precedent for other Hong Kongers to seek for protection.â€

The British Foreign Office could not immediately be reached for comment.

The asylum for Mr. Cheng came amid scattered unrest in Hong Kong on Wednesday after China imposed a national security law on Hong Kong that seeks to stamp out displays of dissent against the Beijing government. The move has prompted recriminations from other nations against China and spurred fears that it spells the end of the â€œone country, two systemsâ€ framework that had distinguished the territory.

The Hong Kong police, which made several arrests under the law during protests on Wednesday, said a 24-year-old man suspected of stabbing a police officer was arrested early Thursday at the cityâ€™s airport. Local news outlets said he had been preparing to depart for London.

The British government on Wednesday confirmed plans to open a pathway for as many as three million people from Hong Kong to obtain British citizenship. The countryâ€™s foreign secretary, Dominic Raab, said the decision was in response to the â€œgrave and deeply disturbingâ€ new security law.

Mr. Raab called the law a breach of the Joint Declaration, the 1984 treaty under which Britain agreed to return Hong Kong in 1997. He said the law violated the cityâ€™s autonomy, threatened civil rights and undermined judicial independence.

Secretary of State Mike Pompeo called the law â€œoutrageous and an affront to all nations,â€ because under one of its articles, even nonresidents of Hong Kong could conceivably be punished for running afoul of Chinese law.

Last year, Mr. Cheng, 29, traveled from Hong Kong to the mainland city of Shenzhen for a business conference. He was stopped by the police on his return to Hong Kong in the cityâ€™s high-speed rail station, part of which is under mainland jurisdiction.

He was held for 15 days, during which, he said, he was hooded, hung for hours in a spread-eagle position and beaten to force him to stay awake. Under such abuse, Mr. Cheng said, he gave the authorities the password to his iPhone, information about British Consulate operations and the names of some Hong Kong protesters.

Mr. Cheng also gave a videotaped admission to soliciting prostitution, which was later released by the Chinese police. After his release, Mr. Cheng denied the allegations against him, insisting his confession had been coerced. The police have often publicized confession videos in high-profile cases, which legal experts say are meant to display the stateâ€™s authority over individuals.

Mr. Cheng said that his decision to leave Hong Kong had been a result of political persecution, and that he hoped to return some day.

â€œLeaving means not an end but a beginning,â€ he added. â€œWe will continue the fight against the expanding totalitarianism, and be back to our hometown with true democracy and freedom.â€

Mr. Raab said that Britain would grant the roughly 350,000 holders of British overseas passports and an additional 2.5 million who are eligible the right to stay in the country for five years and then transition to applying for citizenship.

The British national overseas passport was created for Hong Kong residents but did not give them citizenship rights.

â€œIf the British side makes unilateral changes to the relevant practice, it will breach its own position and pledges as well as international law and basic norms governing international relations,â€ the embassy said in a statement. â€œWe firmly oppose this and reserve the right to take corresponding measures.â€

Prime Minister Scott Morrison of Australia, meanwhile, said on Thursday that he was â€œvery activelyâ€ considering proposals to provide support to Hong Kong residents. â€œThere are proposals that I asked to be brought forward several weeks ago, and the final touches will be put on those and theyâ€™ll soon be considered by cabinet,â€ he added.

Mr. Morrison did not say what kind of residency terms would be offered under the proposals or how many Hong Kongers would be included.